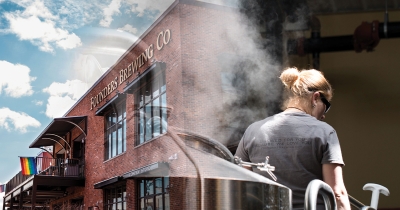 Looking back at Ratebeer’s best brews of 2010 reveals a list of venerable classics. Parsing the top 10, the nostalgia drips quickly. Who could forget their first Hunahpu or Dark Lord? Not I. And at No. 8 we find KBS, the barrel-aged oatmeal stout from Founders that helped spark the barrel beer craze. Now, you can find the former white whale in four-packs at Meijer.

In the past decade, Founders has exploded from neighborhood favorite to the state’s largest producer of beer. Despite the growth, their taproom retains the same charm — and the team’s penchant for experimentation is alive and well on the draft board. Which is why we want to exercise caution in framing this paradigm between Old School vs. New School. Though Founders is undeniably a member of the old guard, the brewery has shown a limberness to adapt to the times.

Revue met with Founders brewer Laura Houser, an employee since 2004, to discuss some of these changes at length, from the evolution of their barrel program to the great seltzer takeover.

Tell us about your history at Founders.

I’ve been officially a brewer at Founders since 2010. Before that, I was in the cellar and before that I was in packaging. I got my start there just helping out in the packaging line and then worked my way up. I’ve been there since 2004. A long haul. Definitely in those days it was very rare to see a woman even in a brewery, let alone working in one. But I didn’t mean to be an anomaly. Jeremy Kosmicki called me up — he needed help on the bottling line — and I was like, “Hell yeah!”

I learned literally everything I know about the industry there on the brewery floor. And that was back in the Brass Works building. There were probably about a dozen people working there then.

Pretty cool to be there on the ground floor.

Totally. One thing that’s changed just in the past 10 years: There were probably only a handful of breweries in the greater Grand Rapids area and now there’s more than 30. Same with beer bars. HopCat had literally just opened in 2008. Before that, you’d go to a bar and you’d be lucky to get a Two Hearted on tap. It was macro beer or bust.

Initially, was there friction in getting the average consumer to drink craft beer when they were used to drinking Bud Light? Or was there an appetite for it?

I think there was definitely an appetite for it. I remember a lot of our original mug club members were almost born again when they came in and had Founders for the first time. They could never go back!

What did Founders' beer portfolio look like then? How has it changed?

Dirty Bastard, Centennial — I’m proud to say that those were definite winners that we continue to brew, and everyone loves.

As some larger breweries leave their flagships to the wayside, that definitely speaks to the strength of those brands.

Agreed. It reminds me of Sierra Nevada’s Pale Ale, which is such a standard. It’s still so good. It makes me happy that there are much older craft breweries out there that are still doing their original beers, doing them really well. We’re always trying to figure out the next new fun thing but it’s good to have a basis that you can count on.

How do you find that balance between pleasing the endlessly distractible consumer and making beers built to last?

I feel like as a brewer myself, we’re always excited about the new things other breweries are doing, like with the New England beer craze and even seltzers coming out. As a group, whenever we’d go somewhere and try something delicious, we’d come home and try to recreate it. That’s how you continue to subsist and exist as a brewery in general — curiosity keeps you moving forward. With any company, or even person, if you don’t evolve and change with everything around you, you’re going to eventually fail. You have to be open to new possibilities.

I have to ask about Founders seltzer: When you ask brewers what their crystal ball vision is for the future of beer, it’s a lot of things that don’t look like beer.

I understand why people are saying, “That’s not craft!” But it’s craft in a different way. It’s a fermentation process. On a hot day, a seltzer beats a beer every time. Still, something that will always stay tried and true... A good IPA. A good pilsner. A good porter. These basic styles will always be something people come back to because they’re that good.

The Backstage Series is an awesome platform for resurrecting fan favorites and new brands. Is the selection process democratic?

It’s listening to employees, listening to consumers — literally an open forum. It feels like an arbitrary decision if you’re not weighing in on how everybody feels about something. You can think, “I’ve got a winner here!” But unless you have some others who agree with you, you really don’t.

“Brewed for Us” in the sense that if we like it, other people will probably like it. But everyone’s taste buds are different. And a bunch of people just agreeing something is good doesn’t necessarily make it that way.

How has Founders’ barrel program grown?

We’ve tailored it and grown it a ton. We first started doing barrel-aged beers back in ‘05 and ‘06 and it was tough to get barrels. We got stuff from this guy we called The Pirate. He had an old horse trailer and he’d go down to Kentucky. I don’t even know how he’d get these bourbon barrels, but he’d just shove them in his trailer and bring them up to us. It was very unprofessional, but we wanted to figure out a way to do it because we saw the potential there. A breakfast stout in a bourbon barrel? YUM.

It’s funny though: That first year we didn’t make a very big batch and that KBS sat in that cooler that first year for the longest time. Nobody wanted it.

Let’s talk about your taste and the consumer at large. Have you seen any shifts in what people like to drink?

I’m an equal opportunity drinker. I love it all. We talked a little about the seltzer thing. That’s something that if you asked me 10 years ago was that going to be a thing, I would have laughed at you. Or even the hazy IPA trend. I would have laughed. Everything that’s changed over the years, I’ve had to taste myself and that changed my palate.

I know that sours are obviously a very old style, but for a long time it wasn’t common to have anything sour in the United States. That’s something that’s really popped up and I don’t think I could live my life without all the versions of sours now. I’m often amazed by how educated the average drinker is now, even between the differences between kettle sours and oak-aged sours.

Have you seen gender representation in the industry or is it still kind of a boys’ club?

I think yes and no on a brewery-to-brewery basis. There are some that are way diverse, women-owned, or black-owned, and then you have some where it’s just a bunch of white dudes working there. But maybe all the white guys there are wearing Black Lives Matter shirts.

When I started, from what I saw, it was primarily a white boys’ club. It really has grown and expanded in the sense where it’s much more welcoming because everyone’s there. For me being a gay woman, those were two things I never saw in a brewery and that’s just not true anymore. Now there’s a ton of women working both front and back of house in breweries.

What brought you joy working at Founders back in the day? And now?

I loved those old days when we were poor. We really were just struggling trying to keep that place going. But by our own creative wits and having fun, we succeeded. I liked that camaraderie.

I think the joy in working there now is that I work with a lot of really amazing human beings that are creative and intelligent and want the same thing as me, to give the consumers a really awesome product.

Looking forward, what are some things you hope to accomplish or ways you see the company growing?

I’m the type of person to live in the moment and enjoy that for what it is. I try to remind those around me who are bent out of shape about things from the past, “Hey, let’s center in, have this beer and just enjoy ourselves.” Especially with this pandemic, and this messed up COVID world, none of us know how long we’re going to be here.

All I know is that I’ve only got this one chance, so just do your best to be kind, enjoy yourself and try not to hurt anybody in the process.

Tweet
Published in Microbrews
More in this category: « New School Pumpkin vs. Oktoberfest »
Login to post comments
back to top