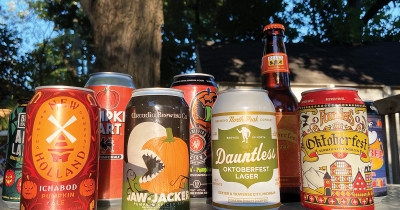 Fall is a season of beverages: hot coffee, apple cider, pumpkin spice lattes, and — above all — pumpkin beer and Oktoberfest.

Ever a war wages between the latter two, as beer lovers often fall into either the “fun, seasonal, flavored drinks” camp or the “Bring me my lederhosen!” faction. There are some who even turn their nose up in disgust at the very idea of a pumpkin beer.

For the uninitiated, Oktoberfest can describe a few styles, all getting their name from the massive German festival. The main style here is Marzen, a lager with good body, malty flavor and a clean finish. It’s got a little more going on than the standard lager and it’s perfect for tearing through a six-pack after the orchard.

Pumpkin beers put spices like cinnamon, allspice and nutmeg at the forefront — often with actual pumpkin to boot. Overall, we find it to be a seasonal delight, though it is true that breweries can fall into the trap of creating super funky spice bombs with an aggressive aftertaste.

To settle the dispute between these styles, we decided to taste four pumpkin brews and four Oktoberfests — plus one cider, for kicks — all from Michigan. The plan: Rate them individually, average the scores and see which style came out on top.

Of course, thanks to the universe’s propensity for irony, the averages came out exactly the same: 8 out of 10.

We swear on our mother’s apple pie we didn’t plan this.

Honestly, we were pretty surprised ourselves, though it does seem pumpkin beers are improving across the board. And to be fair, if we had the chance to try a Marzen from experts like Cedar Springs Brewing Co. or Territorial Brewing Co., that may have tipped the scales.

Maybe next time you’re watching the leaves fall, crack open a pumpkin beer and then wash it down with an Oktoberfest. 'Tis the season!

New Holland Ichabod
We’re not sure if our palates have changed or the beer has, but Ichabod seems to be getting better over the years. This year’s rendition is beautiful. It smells like fall the moment you crack it open and pours with a beautiful head. It’s perfectly balanced with the cinnamon, nutmeg and pumpkin, creating an incredibly drinkable experience. At 4.5% ABV, you could even use it for a drinking game. You know … Theoretically. 9/10

Griffin Claw Screamin’ Pumpkin
This beer is uniquely easy to drink, despite tasting like a meal. Griffin Claw goes hard on the roasted pumpkin, with tons of the actual gourd in there. But the spices balance it out well, along with some nice malt. There’s really no aftertaste here, either. Full of flavor and crushable: What more could you ask for? 8.5/10

Brewery Vivant Pumpkin Tart
This beer was billed as a sour — and it is, a bit — but the tartness comes and goes. With a good body, aftertaste and spice balance, this is a solid pumpkin beer. As a sour, it’s OK. The two together make this beer unique, but not necessarily as great as it could be. 7.5/10

Blake’s Apple Lantern
This roasted pumpkin cider is really nothing like the others: ALL the flavor comes from the gourd itself. If you’d love to eat a pumpkin pie with no spices, this is the drink for you. There’s absolutely nothing like it. 7.5/10

Arcadia Jaw-Jacker
Short’s Brewing brought some of Arcadia’s products back to market, including the Jaw-Jacker. It’s a good beer, but it could use some actual pumpkin to balance out the spices. This ale is light and closer to a lager. The spices build as you drink it, yet still don’t amount to too much. Simply needs some tweaking, in our humble opinion. 7/10

Bell’s Octoberfest
We like a nice, balanced, malty Oktoberfest, and Bell’s take on a Marzen fits that to a T. It pours a beautiful golden-amber color that tells you what you’re about to taste. It’s expertly balanced between the malt, a touch of herbal hops and a touch of spice flavor. And the body? Perfectly medium. At 5.5% ABV, this may be the most crushable fall beer around. 9/10

North Peak Dauntless
This beer snuck up on us, much like Dauntless, the troll who lives under Mackinaw Bridge. It uses unique German Tettnang and Hallertauer hops that give it a flavor unlike anything else. It’s nice and malty and quite toasty, too — warming you right up on those cold fall nights. Could perhaps use a bit more body for our tastes, but if you want something different with real character, this is it. 8.5/10

Founders Oktoberfest
Founders’ new Oktoberfest focuses on tradition. This one is definitely a lager, so if you seek big malt, look elsewhere. This is clean, light and incredibly easy to drink, which ain’t bad for 6% ABV. This is a beer where you could pick up a six-pack, enjoy the first one, then drink the rest without thinking about it. 8/10

Odd Side Oddtoberfest
OK, this isn’t a bad beer. But we think Odd Side does best when playing in Wonderland. This leans toward cream ale but has good flavors and is pretty solid. For an Oktoberfest, it just could use more going on. There are no off-flavors or anything like that, so still give this one a try — it might be your favorite! 6.5/10

Tweet
Published in Microbrews
More in this category: « Old School The Brewery Guide »
Login to post comments
back to top