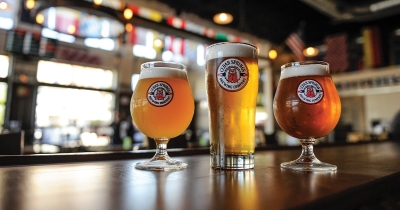 Let’s imagine Michigan as the human body. We have Lansing, the beating heart of course. Then Detroit, the blood and bone. Grand Rapids, the liver, busting ass for Beer City. And the U.P., let’s just call that the toupee. But what of the rest? Detours off the interstate reveal a collection of one-stoplight cities that add to the composite of our functioning system. And like the body needs nutrients, every small town needs a watering hole to survive.

In this day and age, breweries often fill that role. They function as catch-all epicenters where folks gather for events, shared meals, or perhaps just a pint and a laugh. But sometimes, the beer is so good, word gets out. As it happens, some of these hometown heroes have exploded into production monoliths that loom over main streets, luring beer geeks from counties, if not states, over. We hate to swarm locals with tourists, but really, plug these spots into a GPS and seek them out, no matter how far the drive.

Bellaire has all the charm of a Northern Michigan town yet somehow none of the buzz. Traverse City might entice the travelers, but Bellaire has an attraction fudgies can’t find at Cherry Fest: Short’s Brewing Company.

What began in 2004 as an outlet for Joe Short’s experimental brews has since grown into the third-largest producer in the state — no small peanuts when Founders and Bell’s are your competition. While the business was built on a stable of excellent flagships, it’s the reputation for odd one-offs that precedes them. Take Juicy Tree for example, an IPA with spruce tips, juniper berries and cranberries. The team was cranking out wacky stuff way before it was cool.

From humble beginnings, their pub has blossomed to add an annex for extra Short’s enthusiasts. They’ve also opened a “Brewtique” across the street, welcomed Starcut Ciders to their portfolio, and expanded distribution from Colorado to Florida. The last thing left to do is open Short’s amusement park. I can see it now — the swinging ship in the shape of Joe Short’s mustache, the Soft Parade tilt-a-hurl, a chorus of Oompa Loompas quarreling beneath the Huma Lupa waterfall. It will be the Willy Wonka world we’ve always wanted.

Ditch the Eurotrip and venture to the outskirts of Kent County for the most authentic German beer experience outside Bavaria. Purists might scoff, but honestly, Cedar Springs’ Weissbier eclipses much of what you can find in the Motherland. If that sounds like hyperbole, inspect the awards cabinet. They’ve earned a bounty of gold medals by improving upon the centuries-old recipes of Cristoph Kusterer, one of Grand Rapids’ first brewers.

The food menu warrants equal attention. A hall of fame of beer hall classics, there’s no better pair to a dunkelweizen than a hulking chunk of schnitzel. Festivities are in full swing during the Red Flannel Festival, a tribute to the loggers and lumber barons who built Cedar Springs. It’s when the spirit of the city truly comes to life, with all the raucous energy of Oktoberfest, hosted in West Michigan.

Should Cedar Springs secede from the Michigan Commonwealth, they already have a checkered flag to fly and the Brauhaus could sate and quench its people forever. Talk about a perfect union.

The most zealous haze bros must make a pilgrimage to Williamston, where M-43 pours straight from the source. Some say it tastes best when suckled directly from the faucet. Wait until the bartenders aren’t looking and make your move.

Commuters have long considered Williamston little more than a pitstop between Lansing and Detroit, but Old Nation has given travelers reason to make it the destination, not the route. Famously, their “New Orthodox” IPAs set the trend for New England styles in Michigan, but the brewery deserves equal renown for its lagers, crystalline and bare without a single flaw. They’re beers you can drink more than one of, which locals probably appreciate.

The future of their brewery once hung by a thread, but thanks to devoted regulars who pitched the concept for M-43, Old Nation now thrives as the sixth-largest brewery in the state.

In the belly of Berrien County, discover Bridgman, the sleepiest hamlet in Southwest Michigan. Its small size is its secret weapon. You can catch a whiff of freshwater off a lakeshore zephyr without a bunch of daytrippers harshing your mellow. It’s where Chris Betts, owner of Transient Artisan Ales, has taken up shop. And while he may have chosen the location to remain incognito, his flagrantly awesome brews couldn’t help but get him noticed.

For a taproom that squeezes in 30 people, tops, oftentimes the stout releases draw lines that surpass the entire population of Bridgman. The fanfare does not surprise. Buckley, a 14% ABV imperial stout with coffee, vanilla and maple syrup, is a showstopper, perfect to enjoy beside a short stack of flapjacks or a midnight slice of cake. Its barrel-aged variants are even better.

Descend on Bridgman with respect, protect its quiet nature, and enjoy some of the finest liquid in Michigan.

For more small-town charm, check out these breweries:

Tweet
Published in Microbrews
More in this category: « The Brewery Guide Cellar Starter 101 »
Login to post comments
back to top