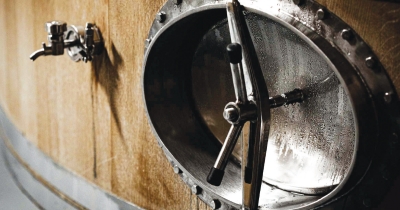 Even cooped up, yeast can stay active in bottles, chomping on sugar and exploding in phenolic supernovas. Just give the little buggers time.

With the takeover of hazy IPAs and fresh-by dates, cellaring has fallen a bit out of fashion but that doesn’t mean there aren’t rewards to reap through patience. Barrel-aged stouts, barleywines, and sours all do well in the aging process. The passing seasons soften harsh flavors and reveal subtlety in these bold beers.

When assembling your cellar, here are a few things to keep in mind: Shelves are nice. Keep your rank and file upright. On its side, beer can oxidize and develop a wet cardboard taste akin to licking a thousand envelopes. A consistent temperature — the Goldilocks zone somewhere between 50 and 60 degrees — prevents flavors and aromas from falling off. Oh, also, keep your loot away from a window or it’ll get lightstruck and skunked. If this all sounds like more trouble than it’s worth, trust us, few things are more sublime than uncorking a vintage sour on a special occasion. It’s like getting reacquainted with an old friend.

To embark on your cellaring adventure, we’ve handpicked a list of Michigan staples that will continue to evolve as you let them slumber. Tuck these away in a safe place, wait at least a year and discover the changes.

Genetic Drift  |  Speciation Artisan Ales
Like the universe detonating from the head of a pin, so too has Speciation’s portfolio expanded from humble beginnings. Plucked from the petal of a crabapple flower, Mitch Ermatinger harvested some wild yeast to launch his brewery’s sour program. The way a strain mutates over time, both by design and by its own machinations, is like watching an evolutionary tree unfurl its leaves.

As a base beer, Genetic Drift is modestly sour but redolent with funk. Additions of peaches in some instances mark it with extra sweetness. We’ve seen versions with aged Hallertau hops imparting such flavors as hay and aged cheese. The most recent variant found itself inside Eastern Kille gin barrels. Whatever form you find of Genetic Drift, make sure to buy a couple and document the changes over time.

Dragon’s Milk Solera  |  New Holland Brewing Company
Dragon’s Milk Solera — much like the Ouroboros — feeds forever into itself. Its name was born from the technique. The Solera method involves a fractional blending between humongous oak foeders, producing incremental, often imperceptible changes. It is the snake sloughing its skin. It is the eternal transmigration of souls. Also, it’s just plain tasty.

Unlike the original Dragon’s Milk stout we all know and love, Solera is a different beast. When poured it looks like lumber, and lo and behold, there are oaky flavors to note. That said, it’s not a total wood bomb — actually, it’s kind of sweet with hints of fig and sugar plums dancing in my mind. At 10%, this one’s more than suitable for cellaring. Watch as time draws out further toffee complexity. Now that’s how to age a dragon.

This beer was built to withstand time with enough fermentable sugar for yeast to chew on for a decade plus. Expect apple-drenched esters, healthy amounts of carbonation and a pommeau nose whenever you happen to open your bottle. If you’re looking for an extra pucker though, wait. Rule of thumb says the longer this sits, the more sour it’ll become. Sounds a lot like my grandma.

KBS  |  Founders Brewing Co.
We’d be remiss not to mention Grand Rapids’ OG aged beer. This 11.2% imperial stout already rests in bourbon barrels for a year before packaging, so what’s the fuss in waiting another to see what magic happens?

While the hype has waned for this certified classic, true fans still collect cases from each year to form verticals, tasting the differences side-by-side. Personal preferences often come down to what kind of bruncher you are — sweet or savory. Some vintages express burnt espresso forward notes, others are as velveteen as chocolate fondue. Crack a couple open before noon for a balanced, fun-filled breakfast

Other great Michigan beers worth stowing away:

Tweet
Published in Microbrews
More in this category: « Small Towns, Big Beer Brews to Cure the Winter Blues »
Login to post comments
back to top