Brews to Cure the Winter Blues 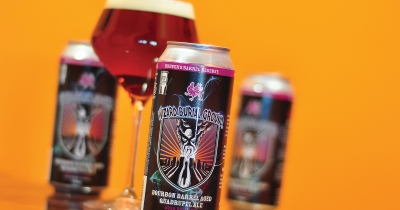 As 2020 amorphously spills into 2021, morale in the beer industry hasn’t exactly improved. We’re still knee-deep in a deadly pandemic while restaurants and bars that desperately need a bailout aren’t getting one. Some say there’s a light at the end of this tunnel, but right now it gets dark at noon and it’s easier to hibernate than celebrate.

That's where we turn to local beer and the inherent community it provides. If we’re unable to fully enjoy a pint at the bar, the comforts of home will do! This season calls for super-fortified, extra-tantalizing delights. So curl up with this selection of West Michigan suds to wash away your winter blues.

Lord knows we could all use a little encouragement to weather these times. Allow me to introduce beer, the best moral support besides mom. This 4.8% session IPA from One Well is here for you, both in quantity and quality.

Mosaic hops shine solo here, but the sensory expression is multifaceted. The aroma is like a grapefruit spelunking in your nose. Flavorwise, expect fresh cut lawn and lemonade. The x-factor here is a clarification agent that significantly reduces gluten. It’s not quite celiac-proof, but for those who feel like an oaf after eating a breadloaf, here’s a beer that’ll cut through the quarantine bloat.

Senescence (the process of deterioration through age) happens to the best of ’em. While our bodies may decay, Speciation’s beers pull a Benjamin Button, working out kinks over time. For the sake of this list, let’s talk about the ultimate quarantine brunch beer, Senescence, a dark sour with coffee, maple syrup and vanilla.

On the nose, it’s hard to suss out the ingredients individually. I smelled a puff of barista musk. On the palate, Senescence confounds further. While we often see sours dosed with fruit, this one steers toward pastry territory. After a rush of acidity, in comes the coffee bean like a macchiato siphoned through a soda stream. Consider it an A.M. pick-me-up. You’re working from home, the boss ain’t looking — go ahead, have a little Senescence for breakfast.

Nothing goes together better than a few brewskis and high-octane extreme sports. Oh wait, is that why I’m one concussion away from becoming a vegetable? While Revue champions good judgement, a pint apres-ski is a necessary pleasure, and with Downhill Delight, Big Lake has brewed some top notch liquid for the lodge.

Like shredding in a whiteout, visibility is low with this hazy IPA. Flavors of candied pineapple and papaya might seem better served for the tropics than the slopes, but maybe that’s the point. It’s beer as escape and at 6%, this medium-bodied IPA is suited for crushing a couple and making the best of winter conditions.

Elusive as Houdini, mythical as Merlin, Brewery Vivant’s Wizard Burial Ground makes its ceremonious return but once a year, so act fast before it vanishes. In a glass, it kind of looks like syrup. Not far off, this 11.7% Begian Quad tastes like mainlining a gallon of caramel. Echoes of bourbon-drenched plums bounce about the palate along with a melange of brown sugar, peanut brittle, and every other Candyland desire.

The can suggests pairing with blue cheese stuffed dates wrapped in bacon, but if you can’t get your hands on those, guzzling a box of melted Raisinets is a solid alternative.

If there’s a populace who know how to suffer temperatures in solitude, it’s the Russians. They even made up their own word for despair, toska, describing a melancholy that permeates throughout their culture. Those who endure Michigan winters can relate, but this 12.5% Russian Imperial Stout from Founders should help ward off the Siberian vibes.

For this recipe, Founders took their classic Imperial Stout and did what they do best: put the beer in a barrel. No light escapes this inky void. The first gulp is like sucking up smoke through a black licorice straw. Initially bracing, gentler flavors of dark chocolate and vanilla emerge as it warms. It’s the perfect beer for staring out the window, watching snow fall, and smiling because you’re not in it.

Tweet
Published in Microbrews
More in this category: « Cellar Starter 101 Dice & Drinks »
Login to post comments
back to top