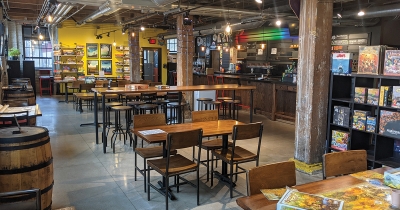 When mankind decided to quit chasing mammals and settle down in Mesopotamia, they found that civilization afforded itself some extra time to dink around. But how were our ancient kin to fill it? Bored, they carved dice from stone, rolled ’em around, and thus, board games were born.

Around the same time, something else pretty cool was going down in the Fertile Crescent: beer. These innovations in leisure injected life with verve, and booze and games have been buds ever since.

Enter House Rules, West Michigan’s first board game lounge with the wherewithal to put these two under one roof. The concept is simple — game store meets bar — but the execution is where rubber meets road. Their selection of games for sale is populated by hundreds of releases, new and old, with extra attention catered toward adult gamers.

Also, expect an expertly curated list of adult beverages from beer to wine to draft cocktails and plenty of non-alcoholic options for the munchkins.

Anyone who visited Craft Beer Cellar, owner Brian Beaucher’s last endeavor, will feel right at home in the space. The bar received a fresh coat of paint, but the ghosts of good times linger. Board game culture played a key role there, with a library of games for beer geeks and weekly Magic: The Gathering meetups had built a solid following. While he mourns the loss of CBC, this change in vision seems like a blessing in disguise.

“Honestly, I might have to say I love board games a little more than I do beer,” Beaucher said.

Raised on a healthy diet of Monopoly and Cribbage with grandparents, games have always been Beaucher’s bread and butter. He’s since graduated to the meaty space-opera stylings of Twilight Imperium and Terraforming Mars, but he’s always down for party games like Codenames too. It’s the thirst for discovering new ways to play that drives his passion as he unboxes new arrivals like Christmas gifts.

That said, for many, trying to decipher rulebooks feels like piloting a submarine upside-down. But never fear: Like trusting a capable bartender for a beer suggestion, House Rules’ on-site “gametenders” can help you parse the shelves for a game that meets your expertise.

That’s a beacon of relief for us quarantine dwellers who’ve grown weary of playing the same games. Personally, if I lose one more round of Yahtzee to my girlfriend, our relationship might implode, so I turned to Beaucher for guidance.

We settled on Fox in the Forest, a fairy tale-esque trick-taking game that’s been keeping us busy. As we continue to slog through this COVID winter, consider updating your collection with fresh stuff to mix things up.

Games are a great way to disappear from reality for a bit and shift focus from the bleakness of current events. “It’s a way to get people together and not necessarily have to talk about anything,” Beaucher said. “This is your subject matter, this gives you your topics to keep the discussion going.”

It’s clear that in a world where an infinite library of digital games rests at your fingertips, people still crave analog.

“There’s something special about the tactile experience,” Beaucher said. “It’s like having dinner with your family. You set up the pieces, you organize everything, you’re getting in arguments, you’re having fun. It’s a way to bring people together, have a few drinks and have a good time.”

Booze n’ Board Game Pairing Like the art of pairing cheese with wine, different games call for different drinks. We put Beaucher on the spot to link up some classic board games with a proper beverage.

Monopoly - “Gin Martini. Monopoly is all about trying to get super rich and taking over everything,” Beaucher said. Nothing more nefariously fun than sipping on Long Road Distillers’ Dry Gin while raking in the cash from your Boardwalk hotels.

Settlers of Catan - “What do pirates drink? Grog!” While brewers just don’t make grog like they used to, New Holland’s Pilgrim’s Dole tastes groggy enough to us.

Magic: The Gathering - Noting how tensions can flare between players, Beaucher recommends sour beer. Share a bottle of Speciation with your enemy to really watch him pucker up.

Euchre - “I feel like that’s shots.” Agreed. Two James Spirits’ Mezcal Joven feels right for shooting. Toss a couple of your own over your shoulder to stay alert and better steal the deal from your opponents — if those are your house rules, anyway.

Dungeons and Dragons - “Light beer. You need to marathon, to sit there and drink a 12-pack over 8 hours.” Doesn’t get much more quaffable than Founders’ Solid Gold. Now available in 24-packs for those extra late nights of dungeon crawling.

Tweet
Published in Microbrews
More in this category: « Brews to Cure the Winter Blues Flavor-Blasted Brews »
Login to post comments
back to top