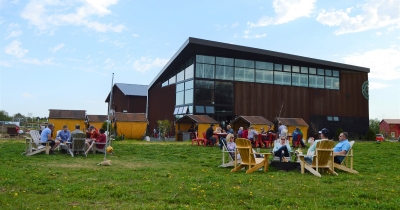 Somewhere in the belly of Berrien County, as the warm 3 o’clock light spills in through the driver’s side and the buzz of a brewery or two fizzles in the rearview, an epiphany sets in: Southwest Michigan rules.

This fertile crescent between the St. Joseph River and Lake Michigan overflows with quality beer, but it seems like a lot of folks in Grand Rapids are too busy heading North to notice. Some say the region is too far out of reach — it’s not. It only takes an hour before the fun begins, so jump in the car pronto and discover the charming hamlets dotted along the map.

Revue made a similar trek a few years ago, but with an everchanging beer landscape, we felt the loop warranted a return. In this updated tour, we have compiled what might be the perfect itinerary. There’s minimal driving time between spots, a diversity of styles and vibes among the breweries, and of course: an abundance of good suds.

Like moths to the flame, Arclight has lured beer geeks to Watervliet for years with beers that light up taste buds. Their Soursmith series in particular zaps the palate with sours that taste like fruit strapped to an electric chair. Don’t miss the Black Raspberry variant, a berry bomb of mind-melting proportions. But for those looking to slow their roll off the bat, Arclight concocts their own craft sodas including a Root Beer, a Lemon Lime and a Rock and Rye. Whatever the beverage, kick it out back on the bocce court or beat the heat indoors and marvel at the big ass ceiling fan that could make a jet propeller blush.

River St. Joe arrived fully formed last year with every intention of becoming a destination farmstead brewery. The pandemic may have kept them off the greater state’s radar, but expect that to change ... fast. For starters, the facility is gorgeous, like somebody plopped a modern art museum in the boonies. The surrounding grounds are idyllic too, with ample seating and room for kiddos and doggos to roam free.

But let’s talk beer. I tried their Saisons back-to-back for research purposes. While the Celestial Saison explodes with phenolic esters, top marks go to the Wheat Saison for its balance. The cantaloupe nose marries with a prickly effervescence and hints of bubblegum on the tongue. I see it pairing with pretty much anything on their seasonally rotating menu. The distance from farm to table here is zero and the proof is in the produce. I ordered a BLT on a croissant bun stacked with the platonic ideal of a tomato — lightly peppered, dripping with juice. Perfect fuel to keep the trip rolling.

While a swath of enthusiasts are enraptured by thicc smoothie sours and milkshake IPAs, there’s a countercurrent advocating for the opposite — simple, quaffable beer. After running through Seedz’ gamut of side-pulled lagers, I pray to the beer gods that more breweries bounce back to these trusty styles.

Their slow-pour Hopper Helles was bar none the best beer I had all day. The side pull faucets provide a pillowy head allowing the foam to release puffs of graham cracker and honeycomb as bubbles pop. Flavorwise, it’s all biscuits and toffee. Delicious to the last drop.

Some might disagree but I admire the “anti-flight” mentality here. There’s something to be said for settling in and getting to know a half-liter rather than speed dating a bunch of short pours. If I could, I’d cool it on their patio and get to know each beer better, but until they get distro up and running to this part of the state, a long-distance relationship it is.

The reigning champs of the Southwest beer scene, Transient have left a major mark with a small footprint. Many point to their The Juice Is Loose as the catalyst for the Michigan haze craze, and their spontaneously fermented wild ales are equally influential. Lest we not forget their unparalleled barrel program with whiskey foeders that can hydrate a stout in a fraction of the time it takes bourbon barrels — although Transient is known to use those to great effect too. On this trip, I opted for the Weller Barrel No Cake, a decadent 12% pastry stout with vanilla, cinnamon, graham crackers and Violet Sky cocoa nibs. If that sounds like a little much, their lighter beers, like the German-style pilsner Slow Up, function as suitable palate cleansers.

After a long day of brewery hopping, Watermark rounds out the adventure with a hangout spot worth chilling at until the buzz wears off. Their patio feels like the lynchpin of the Stevensville community, where food trucks, tunes and locals coexist in perfect harmony. I finished up my day with Ghostmeal, a hazy pale that packed a citrus punch at just 4.5%. That said, I was intrigued by a lot on the board, including a fruited foeder-aged sours. Maybe next time!

Perhaps the best part of the experience: A vending machine filled with all sorts of bric-a-brac. For $20, I bought a manilla envelope with “Do you trust me” scrawled on it. Inside, I found a pack of seeds to grow cayenne peppers, a baseball card, a silver dog necklace and an empty pack of cigarettes. These are the kind of souvenirs we need to commemorate a trip well spent.

Tweet
Published in Microbrews
More in this category: « Flavor-Blasted Brews
Login to post comments
back to top