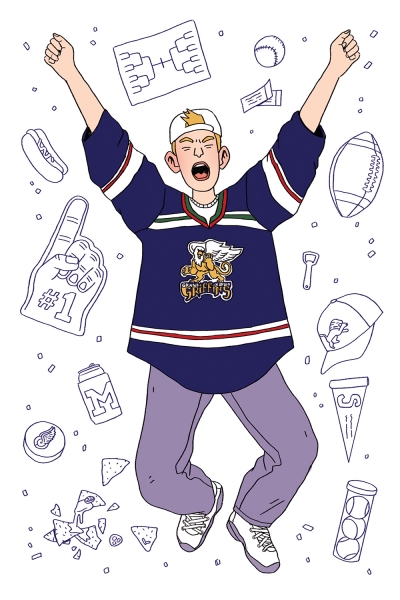 On any given day, the Sports Superfan’s mood can be directly traced back to how well their team did the day before. They’re not just a fan: They’re deeply invested in all things sports, which actually makes your job as a gift-giver quite easy. West Michigan has plenty of places to watch the big games, rep your teams and even play some sports yourself.

Between the yelling, cheering, face paint and heartbreak, the Sports Superfan needs to refuel. Help your college football fan eat up all the sports they can with a basket of gooey nachos and a hearty O-Live in Michigan Burger. This joint is relatively new to Monroe Avenue, with a second-floor balcony, a Michigan-centric atmosphere and endless screens for watching the big game.

Nothing goes better with sports than beer. While Big Ten fans in our state are pretty divided, this brewery has two newly released IPAs that give both MSU and U of M fans something to get behind. The new brews — Haze & Blue
and Sparti Parti — are now available on tap and in cans. Get your superfan a gift card or a six pack, so they can rep their team to the fullest.

Signed Detroit Lions football? Check! Autographed University of Michigan poster? Easy! Your sport memorabilia needs could all be met at this local shop. With a wide variety of pro and college sports collectables and trading cards, there’s something for every Sports Superfan here. While the shop is filled with Michigan-centric gifts, it also has memorabilia from all around the states.

Some Sports Superfans' bodies don’t take to tackling the way they used to. And that’s OK, because now they can throw a football and compete in a competitive game without the threat of getting sacked. Take your fan here for a game of Fowling, a combination of football and bowling, all while drinking a cold one (or two) from Beer City USA.

Concerts are nice and all — but when Van Andel switches the stage for ice, that’s when the Sports Superfan really shines. A full-season membership will give your fan seats to all 38 regular season games as well as discounts to Detroit Red Wings games, shorter member-only concession lines, and much more. With a plethora of benefits and flexible payment plans, this gift is a must for your die-hard Griffins fan.

All right, Tigers fans: Let’s talk baseball! Your Sports Superfan may not be MLB material, but they are fully serious about their office/church league softball team. Hook them up with practice time at Game On’s top-of-the-line batting cages and pitching tunnels, so they can perfect their game. You could even add in-depth analytics for a few extra bucks, if they
really want to go pro.