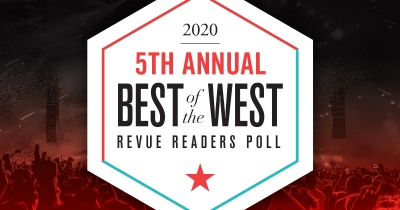 Every year since 2016, Revue readers have come together to shout their love for local establishments from the rooftops — or at least from their web browsers. Breweries, restaurants, hair salons, museums and more are thrust into the spotlight with Best of the West. Here are your 2020 winners!

VORACIOUS VOTERS
Over the course of those five years, we’ve seen tens of thousands of voters make their voices heard via Best of the West, casting nearly 500,000 individual votes across all the categories. The average voter gets nothing out of this personally — it’s all about supporting their favorite businesses and people, making sure they’re successful.

This year, we wanted to do something special for five years. We planned to host Best of the West Live! It was going to be a party at 20 Monroe Live near the end of July, announcing all the winners of the survey in person. Now, large gatherings are not exactly all the rage, so we’ll be seeing you next year.

The planned live event still affected this year’s survey, though. To make it more manageable, we cut down the number of possibilities from 140 to 100 categories. If nothing else, the response has helped us see which areas people are passionate about. You can likely expect to see The Arts back in the mix next year, for instance.

We also cut the voting time period from the typical two and a half months to a little over one month. Between that and COVID-19, I’ll admit we had slightly fewer voters, but something amazing happened: The 123,053 votes cast across those 100 categories were more individual votes than we’ve ever had.

That means — despite only being required to vote in 15 categories — each reader voted in more categories than ever before. On top of that, 2020 boasted the most daily voters by far, coming in at 110.75 voters per day — compared to 64.4 per day last year.

In other words, this year’s voters were passionate and came out in full force.

COUNTING CATEGORIES
While we have 100 categories, we split those into some larger groups, such as Dining and Drinking. This year, we added a new group: Attractions. Will it stick around?

Well, I won’t get into the nitty-gritty this year, but I will say Attractions ended up receiving the second-highest number of votes per category. Not bad for the new guy! Of course, Dining is still the most popular group — we all have to eat.

And while it’s far too tedious to figure out which individual categories are most popular, I can tell you which nominees received the highest number of votes. Without revealing exact counts, here they are.

These are the nominees that decisively were considered to be the best in their categories.

Speaking of which, for our fifth year, we decided to do something special: Milestone Awards. These awards went to winners that have earned first place every single year for five years, such as Clique Lanes for Bowling or HopCat for Fries.

Shockingly, there were 27 of these Milestone Awards, which speaks to each of their legacies. It may also speak to the need for some voters to broaden their horizons, but we’ll see what next year has in store. Anything can happen, as illustrated by multiple upsets — that is to say, nominees who have won every year ... Until now. For instance, Chop House sat on the throne for four years, until Butcher’s Union performed a coup in 2020.

ONWARD AND UPWARD
What have we learned? Well, above all, I’d say the lesson of 2020 is: Anything can happen. You can run a survey for less time, cut 40 categories and still get more votes. You can work your way into the hearts of West Michigan and dethrone longtime favorites. You can support your favorite businesses in entirely new ways, such as ordering pickup food and voting safely at home.

When Best of the West started five years ago, we certainly didn’t expect to end up where we are now. Who knows what the coming year will hold?

Tweet
Published in Revue
More in this category: « Best of People & Services
Login to post comments
back to top