Grow Your Own Grass 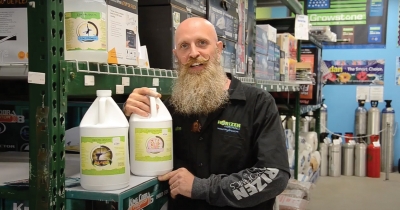 Growing your own cannabis can save you thousands of dollars and may result in the most dank bud you’ve ever smoked.

Of course, there’s a reason everyone doesn’t grow their own: Cannabis is a bit more sensitive than your typical plant, and the startup costs are higher too. However, it’s actually not that hard with the right equipment and great advice!

For both, we turned to Horizen Hydroponics, a local grow store that’s been helping people garden since 1999, and helping with cannabis since 2008. Owner John Ujlaky is a tried-and-true expert by now, happy to aid anyone who walks through those doors, even if you know absolutely nothing at all.

Since I also knew nothing at all about growing your own cannabis, I turned to Ujlaky for advice on where to begin.

How is cannabis different from your average houseplant?

At a certain point, you want to make sure you’re getting something out of this. There’s a lot more emphasis on success. I kind of equate it to a fish tank; it’s not 24/7 maintenance, but there are things you want to do on a regular basis. The plant itself isn’t that big of a deal, it’s the rest of the accessories and equipment that might deter people or have them feeling that it’s difficult.

Indoors or outdoors for growing in Michigan?

Inside, you’re able to control so many more of the variables. You pick the light, the temperature, and create that environment for the plants. Consistency is going to build the success. Michigan is a swamp — everybody is successful growing outside until the end of August. Then those cool nights set in and powdery mildew ruins everything.

Where should a total newbie start?

Generally, we try to start people with the lighting. The environment matters for sure; do you have a grow tent? Is this going to be in your basement? But number one: Things won’t grow in the dark, and so we need a good quality light source. We’ve got some great LEDs here. They’re a little on the pricey side compared to our traditional light sources, but they’ve got the longevity and low maintenance over time. So we’re definitely going to start with a good light known to grow solid, quality plants.

Tell us more about the idea of a grow tent.

If you’re in a Heritage Hill type of house where you’ve got a really old basement, maybe even a dirt floor or something — the tent saves you from having to build an enclosure. It will help you control the environment from the temperature, humidity, and any creepy crawlers. It helps mitigate the odor too.

What are the advantages of hydroponics, which grow with water and nutrient solutions, over using soil?

Hydroponics is more clean. The nutrients are tailored to the plant much more specifically than just letting bacteria find it in the soil. And even when people do like a “super-soil” where they load up all sorts of great organic ingredients, it takes time for the bacterias and funguses to break those down and present them to the plant, so timings may not be hit the same. With hydroponics, we really get a lot more control and the root zone is smaller, so we can fit more plants in a smaller space.

A 4x4 grow space costs about $50 a month in electricity, plus whatever startup costs there are. What’s the advantage here?

You’re going to know exactly what went into the plant and where it came from, including if anything was ever sprayed on it. Michigan does have some great testing, but the whole system has to be supported, so there are a lot of costs. That 4x4 space for three months … with a $400 investment going into everything you need to make that space work, you’ll get more than a pound (roughly 450 grams). If you were to try and go buy a pound at a dispensary, you’re going to spend thousands of dollars, and you just produced it for $400. So there’s a big cost savings.

Any final tips for beginners?

The biggest thing is controlling people’s love, because they just want to love the plant and that equals watering. But the plant doesn’t always need to be watered today! Overwatering is one of the biggest things we try and help people dial back, because it’s a fast way to ruin a plant. And that’s why hydroponics works — it’s not technically too much water that kills plants, it’s lack of oxygen at the root boundary. In hydro, we pump more oxygen to the roots.

Tweet
Published in Cannabis
More in this category: « Smoking in the 21st Century Lighting the Way to Cannabis At Events »
Login to post comments
back to top