From Corner Store to So Much More 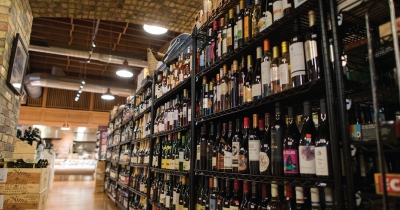 What does Martha’s mean to you? I was deep into my conversation with Ilana Chamelly when that question arose, and had to pause for a minute to mentally organize the vignettes that represented decades of my own Martha’s experience into one answer. It’s hard to be succinct with so many memories swirling, but when I review the tape, what I hear in my response is: Connection.

The “Martha’s” in this picnic-table chat was, of course, Martha’s Vineyard and its family of businesses that share the same umbrella. Like any icon that has earned a mononymous moniker, Martha’s is instantly recognizable among anyone in the Heritage Hill area and well beyond.

The collective, comprised of the store itself, plus beverage and food catering, Martha’s Pizza, Lyon Street Café and Nantucket Bakery — now in two locations — was likely not what Kameel Chamelly expected when he first opened the corner shop in 1981. Nor was the idea that his two daughters, Ilana and Alexandria, would eventually join the family business — Ilana working alongside Kameel at the store and Alexandria managing Lyon Street Café. That happened naturally, in much the same way the growth of Martha’s has.

“It’s been organic,” Ilana said. “When Kameel started the business, I am not sure he imagined the store and complementary businesses becoming what they are today. And while he had the initial vision and has taken risks over the year to achieve this growth, it is our customers who have helped to shape and encourage us. It’s their unique interests and diversity that inspire our team members to curate the selections that we offer.”

Those in the neighborhood view Martha’s Vineyard as a place to discover a new wine, find specialty breads, pastries, meats, cheeses, and deli items, or pick up fresh, locally grown flowers. It’s as much a beacon as it is a convenience. So much so that when the COVID-19 lockdown first occurred, customers rallied around all the Martha’s establishments—as concerned about maintaining these resources for themselves as they were about ensuring the valued team members kept their jobs and livelihoods.

The perspective within the family is a profound understanding of what they’ve created and how they’ve managed to grow and thrive over the years. And, while opportunity, persistence, imagination, and intuition have played important roles, so have relationships. That sense of “connection” mentioned earlier? That reverberates through every interaction and is felt equally by the team members who run the counters at the shop, pizzeria, café, and bakeries and the regulars who stop in.

Enjoying a fresh-baked loaf of bread or pastry on a Saturday morning. Chatting with the barista at Lyon Street as they assemble your pour-over coffee. Sitting outside on Lyon Street watching passersby on a summer evening. Impromptu conversations with strangers as they greet your dog or unexpectedly running into a friend. These are all the little moments that create that connection—and make visiting Martha’s more than a simple errand, but an experience.

“Working at the store, what I love is the banter. The routines. The friendships. The smell of falafel that permeates on Tuesdays and Thursdays. The small views into customers’ everyday lives,” Ilana said. “It’s comfortable and inviting, and also really rewarding to see a familiar face and be a familiar face.”

There’s a connection that also comes through sharing food and experiencing the products they sell, whether it’s a rosewater-lychee chocolate bar or nectarine-rosemary jam; fresh, European-imported cheeses or wine and spirits with a story. Team members relate with customers through a mutual love of food, gathering and the histories of the products they carry. During the lockdown, those relationships meant more than ever.

“I cannot tell you how many grocery orders we received over the phone where customers would thank our teams for working and creating a semblance of normalcy for their day,” Ilana said. “It is our team that has been integral to that connection our customers feel to us, and I am so grateful for them.”

What’s next for Martha’s? Right now, they’re regrouping and getting their feet back on the ground as the pandemic recedes. And while that’s the official answer from house Chamelly, there’s a good chance that the wheels are turning. “We’re in a good place,” Ilana said.

Every expansion the Chamelly family has made has had the intention of embracing the neighborhoods where they reside and and those outside of them, too. The flagship, Martha’s Vineyard, is situated at the corner of Lyon NE and Union NE, with Nantucket Bakery and Lyon Street Café east of it on Lyon, and Martha’s Pizza north of it on Union. The second Nantucket Bakery location, which serves as a production facility and delivery hub, as well as a retail shop, is at 1308 Fuller, just north of Leonard. And, Martha’s Catering is just a phone call away.