This annual start to summer in Kalamazoo is back for its 67th year, feauturing the work of nearly 200 jury-selected artists, music and a Bell’s beer garden filling Bronson Park.

Grand Rapids’ biggest celebration of local art, music and food is one of the longest-running festivals in the state. Completely free to the public, it features six music stages, plus theater, poetry, dance and much more.

One of the biggest art events in the world, with nearly half a million visitors and more than 1,500 entries every year, ArtPrize has revolutionized art in West Michigan and is now in its 10th year. The fall event awards more than $500,000 in grants and prizes, while welcoming artists and art lovers from around the globe to our community.

There’s a new holy trinity in town. Beer, barbecue and bourbon? Honestly, what more could you ask for. How about bands, games (lawn Jenga, cornhole, arcade basketball, etc.) and moscow mules galore? It’s all taking over Ah-Nab-Awen Park.

New Holland Brewing is celebrating with yet another street party in downtown Holland. Expect music, food, a daredevil circus, and of course kegs and kegs of beer, including some throwback brews from years past. Admission is free!

This three-day wine fest has something for everyone, from grape stomping to fireworks, classic cars to carnival rides, and so much more.

A three-day showcase of regional musicians, Buttermilk benefits the Circle Pines Center, a nonprofit working toward peace, social justice and environmental cooperation. This year’s lineup includes such local favorites as Megan Dooley, The Accidentals, Last Gasp Collective, Mustard Plug and more, all performing across four stages, with food and libations to boot.

Heralded across the country as a festival experience unlike any other, this massively popular event sprawls across two weekends. The four-day (times two) mecca for electronic music fans features the likes of Bassnectar, Marshmello, Chromeo, Cut Copy and more.

Held at Cannonsburg Ski Area on Thursdays and Fridays, this concert series by the Grand Rapids Symphony features its popular classical fireworks show, as well as Ben Folds and Beethoven vs. Coldplay.

Set in Detroit’s West Riverfront Park, directly across the river from Canada, this festival brings some of the biggest names in indie, alternative and hip-hop to Michigan. This year, Bon Iver, The National, St. Vincent, Portugal. The Man and Vince Staples are playing (among many others). There’s also plenty of food, drinks and free arcade games.

Sprawling across 150 acres of farmland surrounded by Manistee National Forest, this naturally tranquil fest in Northern Michigan boasts some of the best roots music around, including Dawes, Billy Strings, Luke Winslow-King, Leftover Salmon and more.

This fast-growing alternative music festival is returning for its fifth year. Look out for its lineup announcement coming this summer. Past artists have included Lizzo, Twin Peaks, BADBADNOTGOOD, Ra Ra Riot and more. 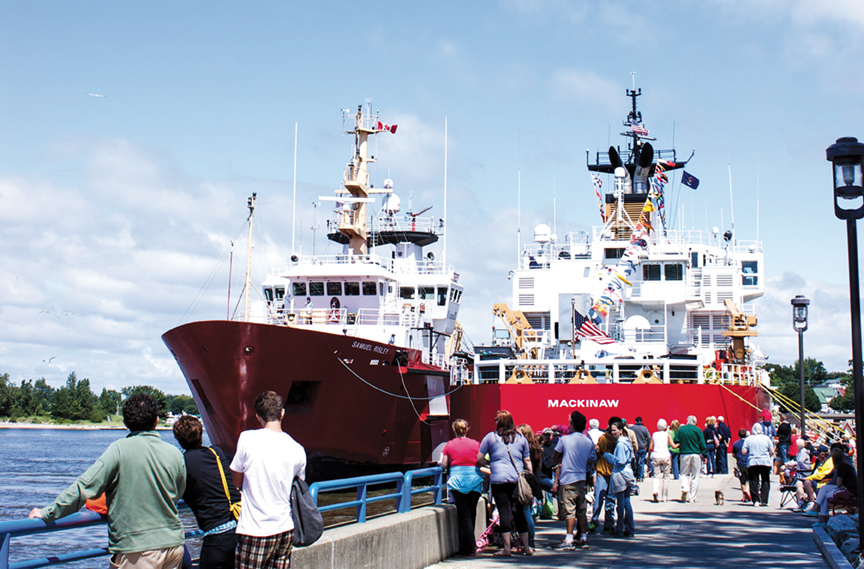 The Asian-Pacific Festival celebrates as much Asian and Pacific-Islander culture as it possibly can in one day. You’ll find traditional attires, martial arts demonstrations, fashion shows, sumo champions, Luau and much more, including (of course) all kinds of Asian-Pacific food.

Support black art, literature, businesses and people with this celebration full of music, dancing, food and much more.

Everyone and everything is a little bit Irish here. Indulge in Irish cuisine, shop Irish goods and learn about the culture. Performers this year include: Scythian, Moya Brennan, Aofie Scott and more.

All the best food and family fun will fill Muskegon’s Hackley Park, including a petting zoo, beer, yoga, luge and more.

Try a new taste with special deals at area restaurants during this week-long celebration of the art of fine dining.

JAFAX is back this year with cosplaying, board games, guest artists from the fantastical worlds of anime and manga, and more.

A hybrid evolution of electronic music fest, car show and full-blown motorsports competition, this three-day event takes it all to the limit. Watch drift track and other racers duel by day, and rage all night with high-profile DJs and rappers like Waka Flocka Flame and The Cool Kids.

Celebrating the LGBTQ community, this year’s 30th Pride Festival will have all the music, performers, rainbows and other fun of years prior, with bands like EnVogue performing.

Dozens of hot air balloons from around the world join forces with hypersonic jets, food, fair rides, and other family fun.

Honoring the men and women of the United States Coast Guard, this festival celebrates with ship tours, live music, food, a carnival and street dancing throughout Grand Haven.

The largest event of its kind in the state, this all-ages swashbuckling soiree puts visitors face-to-face with buccaneers, mermaids, minstrels, merchants, and even hidden treasure.

Tweet
Published in Events / Festivals
More in this category: « Movies in the Park(ing Lot): Why movies are on the move to Monroe North Diverse City: Returning festival celebrates African American legacy »
Login to post comments
back to top