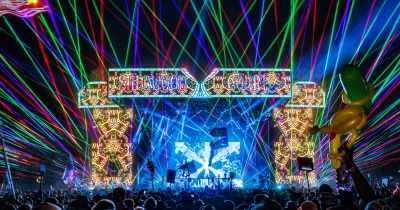 “Everything ain’t for everybody, man.”

It was not without some trepidation that I put on my sandals and headed to Electric Forest. It had been thirteen years since I last attended a music festival (Bonnaroo, in 2009); in that time, I had acquired a wife, two children, a house, and a monstrous dog, along with a comfortable ignorance and suspicion of much of modern music: What in God’s name was a Rainbow Kitten Surprise, for instance, and how could I avoid it?

At first, I walked through a nearly silent campground. Tents flapped in the breeze; grey clouds loomed overhead. There weren’t many people: a few lone males in the distance, walking grimly. I found at a picnic table a huge, shirtless man, head bent over his interlaced hands, his eyes shut, as if praying. If he symbolized anything, it was nothing good.

I found the spot where the shuttle would come and waited next to a woman who looked like Sinead O’Connor, if the singer had had a quasi-cowgirl phase; besides the hat, she wore tiger print, tattoos, mirrored sunglasses, and a nose piercing. We talked about OutKast, which reminded me that I was at a music festival, and that I knew none of the bands.

On the shuttle, I eavesdropped on several people, all of whom spoke the same way: in a slow drawl occasionally punctuated by glorious bursts of profanity. Everything was intense, it seems. “This is the best fucking weekend of my entire life without a doubt,” one kid said. Later, he pointed out an anonymous-looking tree and said, “That’s where I was last night. I was definitely, like, uncomfortably tripping.” (Electric Forest disallows illegal narcotics, but, well, you know).

I got off the shuttle, made my way through security, and began walking the grounds, which were filled with people, nearly all of them dressed much more interestingly than me. A group of men wore colorful shirts, elf ears, fairy wings, and glittering makeup; they were there for a friend’s bachelor party. One of them bore a stick the end of which featured the groom-to-be’s face, much enlarged and slightly terrifying.

A man in a shiny silver shirt and shorts, silver shoes, and a silver cape looked something like a superhero or spaceman; but he paled in comparison, audacity-wise, to the man in the French maid costume. Another man wore pasties over his nipples, as did several women, although some women dispensed with them entirely, freeing the nipples as political act, or at least a way to beat the heat.

People proclaimed fealty or advocated for change via signs and t-shirts. “KRUSTY KRAB UNFAIR,” one sign declared; another, held by a grinning girl, displayed an image of Patrick from Spongebob Squarepants and, below it, the phrase, “Mom come pick me up I’m scared.” A t-shirt worn by a presumably straight guy said, “GAY FOR MAYER.” There were some references to the recent Roe v. Wade decision, but beyond that, the event seemed less a facet of the real world than its own glittering sphere: an escape, in other words.

Everyone was kind. People gave out random high-fives, offered help when needed, seemed happy to be sweating together. One girl, passing me, said, “Happy Forest!” as she slapped a smiley face sticker onto my chest. Another introduced me to the plastic baby she held, whom she had named Peter Dinklage. Among the trees, a man dressed as a sports announcer and his energetic helpers pulled in crowd members to play an unlikely version of football, which mostly involved touchdown dances.

A blue-haired woman dressed as an old-fashioned cigarette girl sold me gumdrops. “If I eat these, I won’t wake up in jail, will I?” She assured me that I wouldn’t. Oh, well. 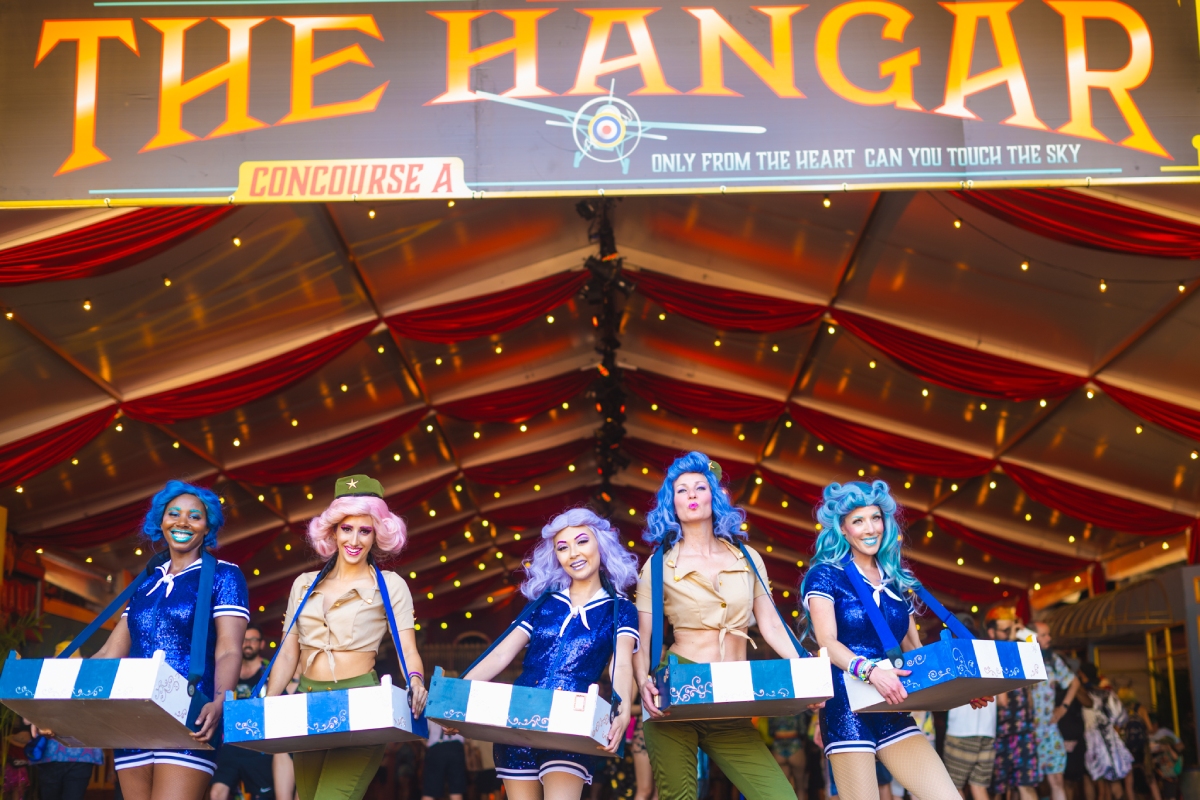 Even more than other festivals I’ve attended, Electric Forest is its own world. You can get a hot air balloon ride there. You can get a free haircut, something I considered until a man dressed like a cow, who had an English accent, told me how long the wait would be. You could bowl, get a massage, dance at a silent disco.

You could participate in a scavenger hunt. At the Time Travel Agency, you’re given a card. As you solve puzzles, you unlock stamps; when your card is fully stamped, you’re given entry into a Poetry Brothel. Yes: a poetry brothel. Who wouldn’t want to lounge on velvet cushions while someone who calls herself a "poetry whore" declaims?

I had to admit it: my reservations about Electric Forest were melting away. Still, wasn’t music the point? At festivals over the years, I had seen a lifetime’s worth of great shows: Radiohead, Bruce Springsteen, Elvis Costello, Snoop Dogg, Neko Case. Best of all was Tom Petty, who, as lagniappe, brought out Stevie Nicks, Queen Of Witches.

And it’s with the music at Electric Forest that I felt my age again, or at least my distance. I listened to jam bands, electronic acts, and more; skilled musicians who dipped into jazz, funk, and roots music, bringing joy to many audience members, but not me. The best thing I heard at Electric Forest was David Bowie’s final album. Then again, this was never my kind of music. As a security guard told me, when asked if he’d been enjoying the event, “Everything ain’t for everybody, man.”

Despite my preference for music that you can enjoy sober – just kidding, Electric Forest; you know I love you – I found myself hit by a surge of affection for the festival: for its welcoming nature; its art (bear statue, glowing jellyfish in the trees); its utopianism. That utopianism might have evaporated after the weekend, as dew evaporates from grass in the morning, but remember that evaporation is not the same as disappearance.

At home, I took off my muddy sandals and poured a glass of wine. T.S. Eliot was right, I’d discovered: old men ought to be explorers. I’m not sure what he would have made of the poetry brothel, though.

Tweet
Published in Events / Festivals
More in this category: « Savoring the Sweet Taste of Success
Login to post comments
back to top