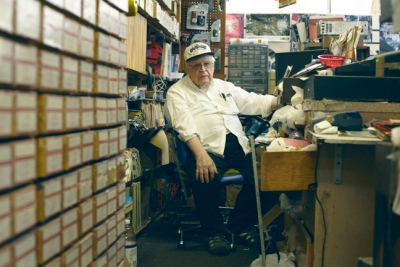 On 20 Division Avenue, just beside the intersection of Division and Fulton, sits a gray and white building. Outside the front door is a sign shaped like a vinyl record. It reads, "Dodd's Record Shop: New & Used Vinyl." But don't let this simple building and sign fool you. Dodd's Record Shop is a music lover's paradise; one that's been holding its own for 60 years.

Inside, the walls are lined with wooden shelves. Each shelf bursts at the seams with vinyl records. There's even a smaller corner filled with cassettes and CDs. Behind a messy counter covered with 45s, random papers and an old cash register sits Gerry Dodd, who owns the business.

He's seen a lot of variety and changes in the music business throughout the years, including the birth of rock n' roll, pop and the rise of folk music into the mainstream. Dodd has also witnessed the evolution of the music mediums themselves. Along with vinyl, he has sold reel-to-reel, cassettes and compact discs. He's even dealt with 8 tracks which, as he reveals, were invented in Grand Rapids by resident Bill Lear. But for the most part, the bread-and-butter of Dodd's Record Shop has been vinyl records.

Kelly Weed, a Grand Rapids resident, is a record collector who has also worked at records stores and has been a DJ for events around the state. Dodd's has always been one of her favorite places to find music that she cannot find elsewhere.

"Sometimes I'll go in there and tell him what I'm looking for and he'll always come back with a stack of exactly what I need. Even the stuff that's rare or just strange ... he knows it all."

Up until the late '80s, Dodd sold exclusively new products. This changed with compact discs.

"For a while, you could get about anything you wanted on vinyl," Dodd says. "Then the record companies started dropping this one and dropping that one from vinyl. They were just gonna focus on CDs."

This, of course, worried him. Then one night, he had a dream.

"In this dream, there was a TV set, and there were just flickers of light on it but nobody on the screen," Dodd says. "But there was this whole thought that came over the screen. And this thought said, 'You need to become a new and used records shop to survive.'"

The next morning, he went to the shop and began changing it into a new and used vinyl store, instead of selling only new ones.

"Most of the record shops that survived, that's what they did," Dodd says.

This renewed interest was another major factor in Dodd's decision to keep vinyl records his shop's central product, as well as the younger generation.

"Younger people are the only ones that are keeping the record shops in business. Older people, most of them have quit buying records altogether ... Plus, younger people have better ears. They want to hear vinyl records because the fidelity on an LP is better than on a CD."

With this younger clientele and their renewed interest in vinyl, Dodd has been able to keep his business strong, even amidst the boom of Internet-based music sales.

"It's so easy to steal electronically, it isn't even funny," Dodd says. "Just look at what's happened to the DVD market. Man, the stores are closing just as fast as you can close them. You can hardly stand outside without hearing the sound of a door closing."

As the years pass and changes come, Dodd is also facing the changes that accompany growing older. His arthritis makes it difficult for him to move around as much.

"Life doesn't give you any rewards as you get older," he says. "It's getting to be a very big problem all over the world. The older you get, the less they want you around ... you can't produce anything. You're just a consumer."

Though Dodd may at times feel unappreciated because of his age and profession, his personality and work have certainly not gone unnoticed.

"I have gone to his store since I was in high school. Gerry is a living institution," said Steve Williamson, owner and manager of Corner Record Shop. "He's also a well of musical knowledge ... you won't find a more knowledgeable person."

And Dodd's not giving up. Even with the passing years and the challenges they present, he still has a passion for his work and for the music that has made him who he is.

"I still enjoy doing it, but it gets harder and harder to function every day. As long as I can keep going, it will be great. But I'd sure hate to see the day when I couldn't come in and work."