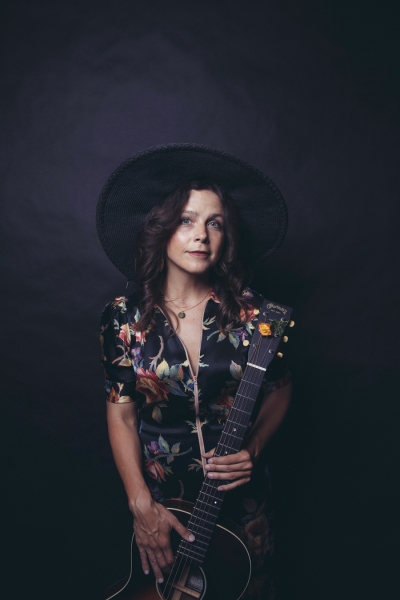 After a few false starts that go back to the spring of 2017, local music favorite May Erlewine will see the release of her latest album, Second Sight, with a string of release concerts all across Michigan this month.

Raised in a musical family, where she was homeschooled as a child and hitchhiked across the country as a teenager, Erlewine gravitated to the rootsy, raw sounds of folk, bluegrass, blues, and Americana, and began writing her own songs at an early age. Her career now spans more than a decade and a half, with more than 20 releases to her credit, making her one of the most prolific songwriters in our state.

Starting last December, Erlewine recorded the majority of her upcoming self-produced album at The Barber Shop in Ann Arbor, with engineer Tyler Duncan.

“Most of (the songs) were written following the election of the 45th President, and are about the climate of our country during his term,” Erlewine said about the politically charged motivations for the new album.

“It seems like a really important time to reconnect to intuition, to a greater sense of knowing and awareness, especially with so many distractions and in a culture that is really championing being too busy to take care,” she added.

“It feels like we’re all losing our minds because we are not connected to our hearts, our truth, our earth. I also feel like as a country we need a clearer, more rooted vision forward. Without grounded vision, it is hard to make thoughtful and meaningful progress in our communities, lives, healing, hearts. It’s something I struggle with and think around an awful lot, and I thought others might resonate with too.”

Second Sight comes after 2017’s Mother Lion, which won two 2018 Jammie Awards from Grand Rapids community radio station WYCE 88.1 FM, including Album of the Year and Song of the Year.

“Mother Lion was an emotionally vulnerable and tender record,” Erlewine said. “My producer, Tyler Duncan, protected that space for me and encouraged my most authentic offering. It meant a lot that people were able to dig into it, because it meant they were feeling with me and it made me feel less alone in those feelings.”

Shortly before the success of Mother Lion, Erlewine’s song “Shine On” earned her a national spotlight thanks to NBC’s The Voice, when Season 8 winner Sawyer Fredericks sang it during the show’s final round. That same year, her friend and fellow Michigan musician Joshua Davis was a finalist on the popular show.

“That song really belongs to everyone,” Erlewine said of “Shine On”. “It was both surreal and also made perfect sense. It’s a healing, hopeful song and I’m really happy that it had the chance to potentially uplift more people and bring more light in a broader way. Joshua Davis encouraged original music to be allowed on the show. Sawyer grew up listening to it in his homeschool class. That’s such a crazy coincidence and beautiful connection. It’s really humbling to bear witness to the power of music, every single time.”

Continuing to follow her personal mantra of “Never One Thing,” Erlewine shook things up quite literally with her group The Motivations, playing host to many groove-oriented dance parties around the state and the country over the past year. The group has released two EPs, 2016’s The Little Things and this year’s In The Night.

“The Motivations is also a big reaction to the divided and fearful things happening in our communities right now,” she said about why she brought the group together. “I wanted to create a reason for people to come together and move their bodies and sing and feel joy and community and have fun. It’s not to ignore what is happening, but to stay connected to our bodies and joy and each other.”

For the upcoming release concerts for Second Sight, Erlewine has assembled a special band to support the new songs, including Max Lockwood on bass, Michael Shimmin on drums, Eric Kuhn and Phil Barry on guitars and Joe Hettinga on keys/synth.

“We want to create a rich piece where we open up feelings about what is happening in our country right now,” Erlewine said. “The record is about how to grieve, reconnect, change and acknowledge the pain that our flag and colonialism carries with it. How do we call this home and feel all of these things? I don’t have the answers, but I want to create room for grief, questions and community.”

“I also want to use music to lift us into an engaged place again. If we are disengaged, it will be hard to be an active, whole part of the change.”