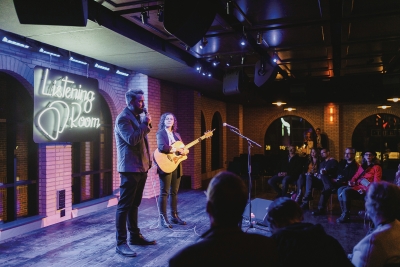 Completely seated for every show, the intimate, comfortable concert environment will encourage audience members to sit back, relax and soak in the music.

“Listening Room has got a Sinatra vibe to it, with booths along the walls for larger groups of attendees,” said Quinn Mathews, Listening Room General Manager and Talent Buyer. “There’s a bar with servers. Nice bourbon, beer, wine. But when those houselights go down and stage lights go up, you shut up and listen for the next two hours.”

The venue plans to be active with live music as often as 20 nights per month. So rather than celebrate with a grand opening event, Mathews wants to launch right into the large slate of shows he has planned for the space.

“I didn’t want to just open with one big show as a grand opening,” he said. “I wanted to open by announcing 30 shows coming up, which we did.”

Last month, Listening Room hosted a handful of soft opening concerts so Mathews and his staff could dial in all the details, from the audio to the stage and seating. Those shows included a benefit for Heartside Ministry featuring Michigan artist and The Voice finalist Joshua Davis, as well as performances from other area artists.

He added that he wanted Listening Room to serve as a place where all talent could get the attention it deserves, from rising local bands to internationally acclaimed stars.

“We have an incredible community here and I was lucky to be manager at eclectic music station WYCE 88.1-FM for a couple years, and I was around so many music fans that appreciate so many different styles of music,” Mathews said. “Listening Room is designed to be a place to go to take in the art of music, to let go of your day for a few hours and appreciate the work that goes into creating a song, no matter what style of song it is.

“I spent 10 years down in Nashville before moving here,” Mathews said of his days as a musician.

“Writers’ rounds are in every bar on every corner, every night. It’s how you get out to test new material or tell stories about any of your original material. I’m glad Nick started this series. I’m sure there will be a lot of this kind of thing in Listening Room and it’s going to be fun to have a monthly Stories & Song vibe with a wide variety of local and regional musicians.”

Modeling Listening Room’s active schedule of shows after similar venues like The Ark in Ann Arbor and City Winery in Chicago, Mathews hopes to have musicians in the room at least four nights a week, if not seven.

“We did some interviews with music fans and it seemed like people were asking for some earlier shows for a couple reasons,” Mathews said. “One may be they want to be done and go home. Or, two, they can leave this show and head right over to Founders or The Intersection or The Pyramid Scheme to catch a late show. I like both of those ideas.”

For a full schedule of Listening Room events — including a two-evening run from GR’s own The Verve Pipe, Nov. 29 – 30, and a two-set performance from Michigan singer-songwriter Laith Al-Saadi, Nov. 6 — visit listeningroomgr.com.

Tweet
Published in Local Music
More in this category: « Clear Vision: Michigan singer-songwriter May Erlewine wants to move forward with politically charged new LP Beat of His Own Drum: Why Dalton Thomas chose Grand Rapids over Nashville »
Login to post comments
back to top