Beat of His Own Drum: Why Dalton Thomas chose Grand Rapids over Nashville 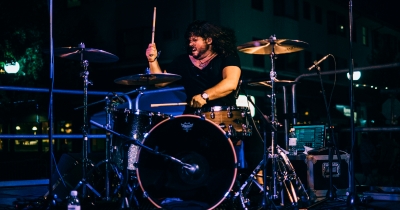 We get it. You have a dream, but you don’t know where to start. It’s the age-old Blank Page Syndrome — the fear of failure mixed with adrenaline-filled anticipation — that keeps you from leaving your day job and following your day dream.

Well turn your excuses off with your morning alarm, because Revue likes to talk to artists living and working right here in West Michigan about the first time they picked up a camera, set of drum sticks or ballet slippers.

We sat down with Dalton Thomas, professional drummer, to ask how he waded through worries and fought off failures to get where he is today. Thomas has toured with bands like Flint Eastwood, Rival Summers and Brother Elsey. He’s performed in notable venues such as Red Rocks Amphitheater in Colorado, House of Blues in Cleveland and The Crocodile in Seattle. Not long ago, he relocated from Detroit to Grand Rapids and told us the story of why he’s chosen to build his career in here West Michigan over Nashville.

When did you start playing the drums?
When I was about six or seven, I sat behind the drums at my friend’s house in Austin, Texas for the first time. I just started banging on the drums and was like, ‘This is kind of cool.’ My dad then bought me a drum kit, and I started practicing. I kind of taught myself how to play at first, and then I started playing in church youth group and main service once I got into my teenage years.

What do you do now as a drummer?
I am a studio and touring session drummer. I am a freelance musician that gets hired in by artists, bands, producers, engineer — really anybody who needs drums, percussion, track sampling, even running Ableton Live. I do some producing stuff too on the side, but most of my income comes from a playing shows around the state, regionally and nationally.

What led you to being a full-time, profession drummer?
The best decision I made for my career was to go to DIME (Detroit Institute of Music Education) because I learned so much about the technical aspect of my instrument as far as form, rudiments and just proper technique. Really the biggest thing they taught me was how to make a living now in the contemporary music scene, though.

Have you always wanted to be a drummer?
I actually wanted to play baseball in college, but I quit my senior year of high school to go on tour with a band. In the moment it sucked because I really loved baseball, and I really loved being with my team. They ended up winning the state championship that year, and I left for tour feeling like shit. But when I got home from touring basically the entire United States for a month and a half I was like, ‘I would make that decision over and over again. Why would I even compare the two things of trying to be on the baseball team or being able to go on tour for a month?’ I guess that was probably the time where it clicked. I was like, ‘This is what I want to do. This truly makes me happy.’

You began your career in Detroit and planned to move to Nashville last year. How did you end up in Grand Rapids and why?
Nashville is always changing. It's a machine. It ended up not working out for me to move there for the better, looking back now. I was living in Flint after college, and I decided I needed to make a change.

I went to Grand Rapids for a weekend and played a show with a band called Brother Elsey at the Pyramid Scheme, opening for Winnow. It was just an unbelievable experience on stage. I had never felt that kind of energy in a short period of time, like that 30 minutes we had performing. We were having so much fun together, and no one was thinking about it — no one was second guessing themselves. We were all just up there doing our thing, and it felt so natural to me.

It just made sense, everything that was going on around me in my life. With this Nashville move falling through, being in Grand Rapids somehow just felt right. Two weeks after that show, I moved to Grand Rapids. I couldn't really pinpoint exactly why it felt right, but sometimes you just have a feeling and you're like, ‘This is right.’ Your heart knows it, and you follow it. That’s what I did.