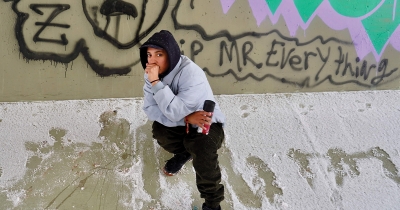 Born in Grand Rapids 29 years ago, local rapper Wuzee (aka Jory Perry) knows all about the hustle.

A founding member of Grand Rapids hip-hop crew The Almighty Foot Clan 777, he has been rapping for over a decade, going back to his days as a teenager coming home from juvenile detention.

“I remember my oldest cousin had a mixtape back in like 2000 that I really liked. And one day he told me if I wrote a rap, he would give me $50,” Wuzee said. “Next time I saw him, I had a rap, so I’d say he was my first influence.”

At 17, Wuzee created his first mixtape of his own while living with some of the members of Broke N Famous on the campus of Western Michigan University.

“My boy Dougie Funz, who was on spring break at the time, told his mom he was going to Florida with the class above him, when in actuality he spent the money his mom gave him for the trip on psychedelics and weed,” Wuzee said. “We ended up not leaving my room for a few days and in the process came up with our first mix tape.”

Looking back, he said his style early on was immature and not as well put together. But he’s grown as an artist, discovering his own voice, pulling heavily from legendary acts like MF Doom and Wu-Tang Clan.

His life and music reached a turning point a few years back, when his cousin, who went by the name Mr. Everything, was killed in a hit-and-run following a show in Ypsilanti.

“I felt like Broke N Famous would never be the same without him, and we all were hurt over it and felt the same,” Wuzee said. “It was and still is super heavy, so I try to forget the dates … But it definitely has scared me as an artist and a person. I can still hear his voice telling me to ‘just rap,’ so I do.”

About a week after his cousin passed away, Wuzee ended up going to jail for a month. While there, he formulated the idea for The Almighty Foot Clan 777.

“The idea was simple: We walked everywhere,” Wuzee said. “We wanted to take the sidewalks back. We considered ourselves ninjas and the city looked at us like villains, when really we were just misunderstood.”

Feeling similarities with the infamous villainous group from the Teenage Mutant Ninja Turtles, the group’s original members included Wuzee, M.I.C Book, Dougie Funz, Swapmeet, Chine Face and Rhymesight. The group has since added more members, with Samil, Kevs Gordo, Gregose and others affiliating themselves with the collective.

“I never kicked anyone out the group and everyone to this day still has an open door to create and be a part of whatever we got going on,” Wuzee said. “So it grows and shrinks depending on the amount of work the members put in. I’d like to say we have showed the whole West Michigan hip-hop scene that we are going to do what we want to do and make the music we want to make.”

Over the past five years, Wuzee has put out a steady stream of releases of his own, including 2016’s Never Die Alone, 2017’s Tomorrow Never Dies, 2018’s Dead Planets & God Jewels, and last year’s Cyanide Bath.

This month he’ll release his latest solo album, Like Food Stamps for Liquor, on his birthday, April 24.

“It’s going to be different, because my DJ/producer/engineer/everything guy at Foot Clan (Samil Sosa) made all the beats, so it’s special to me and super personal,” Wuzee said. “Everything was handcrafted for me and the way I like to rhyme on beats.”

“The inspiration for the album came from a place of hurt dealing with life relationships and having a drinking problem,” Wuzee said. “My music to me is like a time machine. When I hear it, it puts me back in that exact moment when either I wrote it or when I recorded it. It brings me back to a lot of frustration and struggle and hurt.

“When I hear other people enjoy it, or felt something I said, then it makes me feel I’m not alone, and that’s a comforting feeling. So I guess we will see.”

Tweet
Published in Local Music
More in this category: « Revving up the Underground: Moto celebrates 20 years with groundbreaking new EP Supporting Local Music in a Pandemic »
Login to post comments
back to top