Isolation Inspiration: Music for a Movement 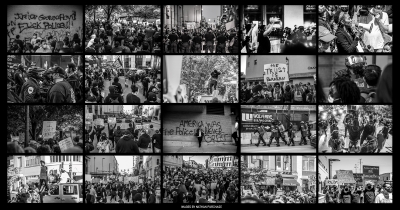 Part of the album art for "George Floyd" by Desmond Jones. Images by Nathan Purchase Photography

In response to the death of George Floyd and the Black Lives Matter protests all over the country in the weeks since, Grand Rapids jam band Desmond Jones released a new song and video entitled George Floyd.

Written by guitarist/drummer/vocalist Isaac Berkowitz, and completed by the other four band members who recorded their respective parts in their homes while socially distanced, the song appears exclusively at desmondjones.bandcamp.com, and all proceeds from the song will be donated to the NAACP Grand Rapids and The Bail Project.

The project came together incredibly quickly with Berkowitz having finished writing the song on May 29, and the band creating the finished product by June 3.

“With this song specifically, there was not any discussion beforehand,” Berkowitz said. “But, what happened to George Floyd was horrible. It was atrocious, so much so it instilled all of us, all of these people who have been out there marching, protesting, making art, with this inescapable knowledge that enough is enough. This kind of thing has been happening every day, for hundreds of years, and I feel like people in this country and now around the world are finally fed up and are finally demanding this change.

“From the looks of it we’re not stopping until we get that change either,” he added. “So when situations of this magnitude occur with movements of this importance, it becomes not a matter of ‘Should we do something?’ but ‘What is it that we should do, and how?’ So as musicians it seemed natural to show our support the way we know best. We are also lucky enough to work with a great photographer, Nathan Purchase, who put together a music video of the song. He used not only his photographs but those of others who have been marching to create an extremely powerful video showing how important this movement is and what an impact it is having on everyone involved.”

“While all of us are pretty progressive and political people we have not really shown that side as much lyrically or in our music,” Berkowitz said. “So this is a bit of gear shift. However, with movements as important as this, supporting the freedom and rights of all people of color, Black Lives Matter, and fighting against Police Brutality it’s important to not only participate but to find what form of participation is going to be the most helpful. Unfortunately some of us live with, or are at high risk ourselves for COVID-19, which makes it difficult to attend many protests or events.

“So, this song and others to come, are a way for us to use our platform and abilities the best way that we can to help the movement. We’ve also been using our social media to direct people towards businesses owned by people of color, or sharing art and other links to organizations helping around the country.”

Tweet
Published in Local Music
More in this category: « Pausing the Music Isolation Inspiration: Creativity from the Clouds »
Login to post comments
back to top