Isolation Inspiration: Creativity from the Clouds 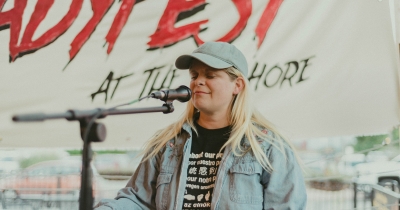 Jessica in the Rainbow. Photo by Rachel Resterhouse

Even before the pandemic hit — forcing all of us to socially distance from one another — Grand Haven-based singer-songwriter Jessica Fogle had what she calls a case of “reverse writer’s block.”

Starting three years ago, Fogle, who performs as Jessica in the Rainbow, set four creative challenges for herself as a way to channel her own creative time and energy at home.

The first was a YouTube project, where she released 365 songs in 365 days, beginning on Inauguration Day 2017 and running until February 2018. She ended up writing 447 songs, culminating in a group song written over livestream.

Fogle followed that with 12 Albums in 12 Months, where she organized the enormous amount of content she created into something more listenable than a YouTube playlist.

Then last year, she began 52 Dreams, where every week she drew a different creative task out of a jar and took on many of the side hustles independent musicians explore — Visual Podcasts, TED Talks, music videos, and more. Sharing it all on Instagram and Facebook, she invited others to join her in the process and encouraged them to move on making their dreams a reality.

She finished her nearly four-year-long, self-assigned “creative school” with 444 Hearts, where she took on cover songs every day.

The whole experience taught her plenty about creative output, flow and continuing to work despite discouragement. Facing down the unrelenting challenges of the music industry, Fogle was seemingly ahead of her time, venturing into the virtual realm many musicians find themselves thrust into now because of the pandemic and discovering a way to turn creativity into therapy.

“I’m incredibly introverted, so it’s actually been fine. Maybe even a relief, in a way,” Fogle said.

“There’s a huge expectation that all artists should play shows, and I do enjoy low-key DIY shows or the occasional bigger show when it’s something really special — not to mention many of my fans are super introverted too! And lately, they have been coming from all over: other states or countries, from Bandcamp and YouTube.”

Fogle is a conservatory-trained pianist meets “freak-folk” lo-fi artist. Describing her own songs as mostly on the quiet side, best suited for meditative listening, she has used this unique time to start voice lessons, which she admits is ironic to do after releasing 20 albums.

With all her experience, going back as far as 2008 when she first took part in a global songwriter challenge, Fogle said the advice she’d give to others looking to tap into their creativity right now is make it an assignment to allow the ideas to flow, then get out of your own way.

“I see flow as childlike. The best thing I ever learned is the idea that our creative brain is on one side and our analytical, editor brain is on the other — and the secret to never having writer’s block again is this: Don’t try to use both parts at the same time. When you’re creating, don’t edit or analyze.

“When you’re editing, don’t expect yourself to create or feel creative. It’s like trying to play with your toys and clean them up at the same time. It doesn’t work.”

Most recently, Fogle has released two giant compilation albums with friends, finding a sense of community in spite of all this isolation. This month, they’ll put out their third release, inspired by the house shows Fogle used to host pre-pandemic, at her DIY home venue called In the Clouds (inthecloudsmi.bandcamp.com).

“I guess it’s been clarifying and focusing, actually, this social distancing,” Fogle said. “It’s helping me learn that existing ‘mostly online’ musically is actually a good fit for me and, if anything, I’ve been able to focus more on the work itself.”