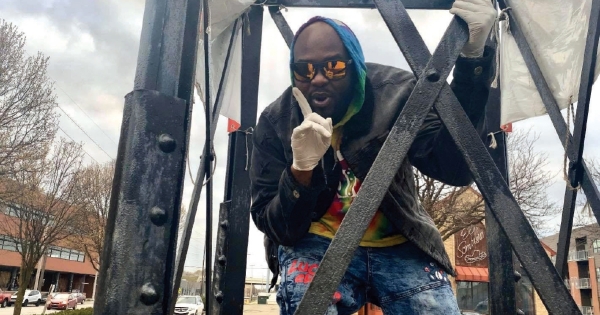 Every city needs a soundtrack. Grand Rapids may have finally gotten its own.

The song has since taken off online, with thousands of views on YouTube, and is available on all major streaming services ,including Spotify.

Callab leads off the track and sings its hook, setting the tone by encapsulating his experiences in the city. He shout-outs local music venues, from 20 Monroe Live to The Pyramid Scheme, The Intersection, and Billy’s Lounge, before sharing the mic with an absolute who’s who of top talent in the hip-hop scene: E-Will, JRob, Lady Ace Boogie, Jance, Cheez Weez, Rebel Kuzco, and Cheezy Scott.

“Me, personally, I’ve never seen a song with so many heavy hitters from the city with so much lyricism and everyone going ham, killing it in their own unique way,” Carter said. “I think this track is the city, and definitely the Grand Rapids anthem for years and years to come. It’s unity. It’s cohesive, progressive and shows the city in its purest form.”

Taking on a collaborative project this big can prove challenging even under normal circumstances. With the COVID-19 pandemic taking over mid-production, the situation proved even more problematic. Together with Sarah Ford and Lady Ace Boogie, Callab persevered and saw the track and its cameo-heavy video through to the finish. Producer 85washere helped record each artist safely, while Carter worked remotely with Andrew Mitchell at Audiobay on mastering and Cocomeka in Atlanta on post-production.

“The pandemic. Well, I’ll just say thank God for creative minds, great friends and, most importantly, everyone who played a part,” Carter said. “We really put it together in the pandemic and it means the world to me how beautiful it came out. It gave me a chance to restart my T-shirt business, go hard on music and get back to cooking home-cooked meals, which is another thing I love to do.”

After losing his mother earlier this year, Carter took time during quarantine to slow down, mourn and reevaluate his life.

“Honestly, this pandemic was a huge blessing for me. It was hard to be creative at times, but when it came to me it didn’t stop, and is still brewing in every way, every day.”

The video for “Citizen” concludes with a touching dedication to Breonna Taylor. The song is the lead-off to Callab’s 61X Pack, a six-song project where he showcases his versatility as an artist and, like “Citizen,” addresses from all angles the town where he was born and raised.

“With everything pretty, there’s another thing ugly,” Carter said of the many sides of Grand Rapids that emerged as part of the recent Black Lives Matter protests.

“The divide saddens me. I’m inspired by the unity in GR, but then also not happy with the level of microaggressions and racism. I will say that this is a start, and I’m very optimistic that we will continue to come together for the common goal, because Black lives beyond matter.

“A world where we are equal is coming and I speak it into existence every day.”

For more, check out grcitizen.com.