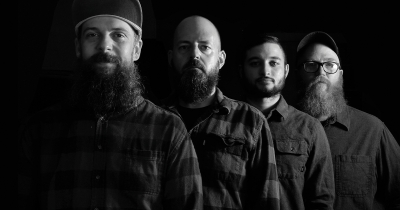 From the highest highs, to the lowest lows, BoneHawk has evolved during the six years since the release of its debut album, Albino Rhino, back in 2014.

The Kalamazoo rock band most recently had to learn to adjust after going into lockdown due to the COVID-19 pandemic.

But that hasn’t slowed down their ascent.

The group pushed on, releasing its second album, Iron Mountain, via all online streaming services back in late June, and lining up the international vinyl release of the LP with European record label Cursed Tongue Records, out of Copenhagen, Denmark.

Pre-orders for the vinyl are available now, with the physical record set to arrive on Sept. 18.

“It’s amazing what you can do with an Internet connection and a USB cord these days,” BoneHawk drummer Nate Cohn said about working as a musician stuck at home during quarantine. “I’ve really developed my home recording set-up. I’ve been able to do projects with people from all over the place. From Brazil to Alaska, and everywhere in between. The art doesn’t stop just because you can’t leave the house. What’s the quote from Jurassic Park?  ‘Life finds a way?’”

Also the drummer for Grand Rapids ska legends Mustard Plug and an occasional performer with indie-rock group In The Valley Below, Cohn knows all about finding new ways to keep busy and collaborate.

He joined BoneHawk after the band released its debut, but his history with the band goes back to his very beginning, playing music nearly 20 years ago in Kalamazoo band Nobody’s Favorite with BoneHawk founder/vocalist/guitarist Matt Helt.

“Matt recorded the drums, vocals, and guitar on Albino Rhino,” Cohn said. “Matt’s such a prolific guy – a modern day Renaissance man. He’s pretty much great at everything he touches. He’s even making his own guitars these days.”

For the recording of Iron Mountain Helt and Cohn were joined by original Bonehawk guitarist Chad Houts, and bassist Taylor Wallace.

“I think that the writing and recording of Iron Mountain gave Matt space to breathe,” Cohn said. “We finally had a lineup in place that clicked creatively, and we each brought ideas to the table that helped shape and mold the songs off of Iron Mountain.”

The band started recording the album locally with veteran Kalamazoo musician/producer Mike Roche at his studio Broadside Productions back in 2018. Recording a few songs at a time over several sessions, the band worked hard to translate its new songs from the live stage to the studio, without sacrificing any of the intensity or energy.

“We grew and evolved our songwriting over this time,” Cohn said. “We’ve always wanted to maintain this heavy blues sort of swagger and feel. Deep down we’re a funk band playing metal. We want to make our fans’ heads fall off from head-banging, but at the same time we want to make people dance and groove. That’s the foundation of BoneHawk, and this feel is evident in both records.”

When the band dropped the title track off Iron Mountain on its social media, Cursed Tongue Records owner Niels Barthody praised the song, and began discussing the idea of working together to help BoneHawk reach fans across Europe and around the world.

“At this point in the game we know that we only want to work with people and companies that love and believe in our work,” Cohn said. “This is one of the best times ever in history to be an independent musician because artists can do almost everything a label can do without them. (So) we chose to work with CTR on the vinyl release because we knew that Niels, the label owner, was a big fan of BoneHawk and our first record.”

In addition to expanding BoneHawk’s global reach during this time of self-isolation and social-distancing, CTR will make sure the vinyl of Iron Mountain is available in local record stores all across Michigan.

“A vinyl record has a distinctly warmer sound than CDs, and certainly streaming,” Cohn said. “Vinyl is the perfect medium for real music collectors. Not only does it sound so great, but the size of the record itself, and the packaging of it, allows for a truer medium for the expression of the music and artist.  To see and hold the cover, to smell the paper, to read the lyrics, a vinyl record is the perfect size for human hands… A vinyl record is a direct gateway into the artist’s soul. I’m not hating on streaming and CDs here though. These other mediums definitely have a purpose of convenience, and it’s so important for all artists to use every available medium to get their art out and heard.”

Tweet
Published in Local Music
More in this category: « BOTW 2020: Music Winners Making a Splash »
Login to post comments
back to top