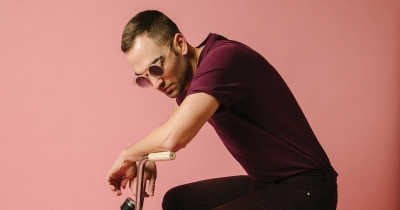 There’s a surprisingly international flavor to the music of Grand Rapids artist Zachary Trebellas, who performs under the name Fruit Punch.

The project goes back to 2014 during Trebellas’ time working as an English teacher in Japan, where he performed at a Valentine’s Day charity event held at a nightclub in Kumamoto

“I was one of 130 English teachers in Kumamoto prefecture, and we would organize events with each other during the year,” Trebellas said. “The charity event was a tongue-in-cheek, sexy kind of auction, where English teachers would strip and flirt with the audience while their friends bid on them. At the time, my twin brother had been writing joke raps for fun and posting them to his Livejournal. I decided to borrow one of the more salacious ones and performed it for the auction.”

After that performance, he decided to start writing his own lyrics and fell in love with the process. He moved to Grand Rapids in 2015 and slowly started performing at open mics at venues like The Fusebox (120 Division Ave. S.) and Dog Story Theater (7 Jefferson Ave. SE).

It wasn’t until 2018, however, that he decided on his stage name.

“I was at a point in my 20s where my gay identity was at an all-time low,” Trebellas said. “My few gay friends were living in other states and countries and I’d been single for most of the decade, so I was feeling disconnected from that side of myself. Little by little I started to realize that my music had become an outlet for my homosexuality as it related to desire, gender. So, I wanted a name that felt gay, basically. I’d always thought ‘fruit’ and ‘fruity’ were funny insults for gay men, so I played around with those words until I found something that felt right.”

Trebellas, who also works as visual artist, curator, and art educator, notes he is influenced by the way K-pop uses rap in a highly pop context as well as the synthesized sounds and styles of early ’80s British New Pop music.

Last fall, he released Knock Out!, his debut album as Fruit Punch, with an elaborate show that he still holds as his best.

“I rented the gymnasium of the Child Discovery Center, which is a miniature gym with a stage from the 1920s,” Trebellas said. “My friends and I decked it out with balloons, streamers, and a disco ball, so it had the atmosphere of a school dance. I don’t think anyone at the show had been there before, especially not for a show, so the night had a special, magical presence to it. I like to have surprises in my stage act, so we used the stage curtains and the backstage to bring background dancers, props, and costume changes, onto the stage. The whole thing felt like putting on a musical.”

Trebellas left GR behind to take part in an artist residency in Greece last November. From a Greek American family, he had been making art about his relationship with Greece for years, so his time there during the residency allowed him to explore that side of his identity more deeply while also diving into composition, primarily on a Korg synthesizer.

“I’ve loved synthesized sounds since I was in grade school, so to turn on the Korg and be able to shape those sounds myself — it was a dream come true,” he said. “I’d played piano as a child, so I know the basics, which has helped me understand this new instrument. But I also come from a family of classical musicians — and my parents met in a country rock band as well — so I crossed my fingers that understanding music was in my DNA somewhere.”

When he got back to GR, Trebellas wrote and recorded four more songs over the winter and into the summer and started to release them as singles online in July. He’s had the songs recorded and mastered with Ben Zito at Centennial Sound and mixed by Ryan Hay of Pink Sky, for a new EP he has set for release on October 23.

“The EP captures a range of moods: anger, desire, humor, trepidation, but sonically it’s all pretty danceable, pretty propulsive,” he said. “I like to rap at higher tempos and I’m a big fan of dance and pop music, so that sensibility pervades everything.”

Due to the pandemic, Trebellas has had to focus more on the digital side of being a musician, including performing during two livestream concerts with Stay In Your House Shows and Jammin GR.

For the EP release he will host his first in-person concert since the start of the pandemic with an exclusive, invite-only, socially distanced outdoor show on October 24.

Trebellas also plans to continue his online single series for the foreseeable future.

“I have a big backlog of lyrics waiting to be applied to songs, so it’s fun to bring them to light every month.”

Visit zacharytrebellas.com for more on Fruit Punch and Zachary Trebellas' other artistic projects.

Tweet
Published in Local Music
More in this category: « Isolation Inspiration: Scaling Mountains Back to the Future: The Mill at Vicksburg »
Login to post comments
back to top