Back to the Future: The Mill at Vicksburg 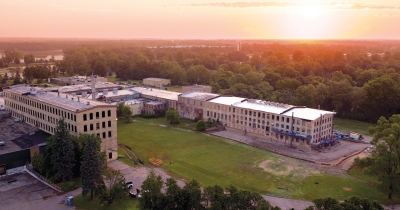 The Mill at Vicksburg. Courtesy Photo

It’s safe to say at this point in 2020, everyone could use something to look forward to.

But looking ahead doesn’t necessarily mean forgetting the past, as shown by the massive multiuse event space currently under construction in the village of Vicksburg.

Located in the southern part of Kalamazoo County, about 20 minutes from the city of Kalamazoo — and just over an hour from Grand Rapids — Vicksburg is one of many small towns in Michigan that had been rocked, repeatedly, well before the economic downturn of this year’s pandemic or even the 2008-09 financial crisis.

The community had seen many of its longstanding employers pull up stakes or fold completely over the past 30 years, leaving an increasing number of its Main Street storefronts empty and its financial future uncertain.

Perhaps largest of all in Vicksburg’s downturn was the closure of the historic Lee Paper Mill, last occupied by Fox River Paper Co., in 2001. The closing left many without jobs and the massive 420,000-square-foot site empty. It remained vacant until 2014, when it was scheduled for demolition.

Yet before rising to success in technology and microbrewing, Moore got his first job working at the paper mill in Vicksburg, where both his father and grandfather spent their entire careers.

So when his mother, Sue Moore, the longtime publisher and editor of Vicksburg’s South County News, called and told him of the mill’s imminent destruction, Moore felt he had to get involved and make the change he wanted to see for Vicksburg.

History in the Making

Built in 1903, the mill made paper for nearly 100 years. The National Park Service has since recognized the site on its National Register of Historic Places, thanks in part to Moore’s efforts with his new company, Paper City Development LLC.

After walking through the mill on a visit home in 2014, Moore had a vision for its future. He looked out over its sprawling 40-acre campus and thought to himself, “This would be a great place for a concert.”

Soon after, he approached Kalamazoo County about purchasing the property and began assembling his team.

The group brainstormed a mixed-use project that would include a place for Moore’s Old Stove Brewery, a distillery, a boutique hotel, a brewery museum, residential and commercial spaces, two indoor music venues, and a planned outdoor concert space capable of hosting up to 10,000 people.

Last year, the group got a big boost when it received a $30 million tax incentive from the State of Michigan as only the second recipient of its transformational Brownfield program.

Removal of asbestos and other hazardous materials — as well as preserving many of the mill’s signature architectural trademarks, including restored wood floors and masonry walls — has made renovating and reconstructing the site a challenge.

Still, the estimated $80 million project has become an absolute labor of love for the Paper City Development team, and the numerous contractors they’ve enlisted to achieve their ambitious goals.

“The energy of the place and the can-do spirit of the community has been especially cool to be a part of,” Kern said. “In terms of The Mill itself, it has been remarkable to witness the transformation — the peeling away of the years of neglect to reveal the quality of the work and the grandeur of the building has been really satisfying. I knew that this would be a really cool job, but I could never have known how great it actually is.”

Kern, who grew up in Muskegon Heights and has over 25 years of experience working in education, also serves as The Mill’s community outreach and education coordinator. While touring The Mill, he displays a passion for preserving as much of the site’s history as possible, as well as engaging young people in shaping its future.

Already, The Mill has launched the Prairie Ronde Artist Residency and The Mill Music Residency, programs aimed at fully integrating art and music into The Mill's redevelopment.

“Music has always been a central theme of the programming conversations related to The Mill, and we knew that we wanted to support artists in every stage of their careers,” Kern said. “We decided one way we could do that would be to create a stipend residency to give artists the support, time and space needed to grow their craft.”

The Prairie Ronde Artist Residency hosted its first artists in spring 2018, and Kern said they hope to launch The Mill Music Residency sometime in 2021.

“When we created the Prairie Ronde Artist Residency, we looked at how we might serve the local and global community,” Kern said. “In terms of our broader goals, we’re working to get Vicksburg and southwest Michigan into the conversation as an arts and culture destination where people from all over feel like they need to know what’s going on here.”

Kern has also reached out to Vicksburg Community Schools’ agricultural program to help establish a variety of pollinator plants in the 80-acre parcel adjacent to The Mill, literally helping the project flourish and improve the environment.

Despite delays due to the pandemic, the team is still optimistic that The Mill will have parts up and running in 2022 or early 2023. By the time of its planned completion in 2024, the project aims to have created over 200 new jobs across its various businesses.

“It’s not like sticking a tax on the public and building some convention center somewhere that the community doesn’t necessarily support,” Moore said. “We’re not guided by one person’s principles. It’s just not like that. It’s not a corporation. I could see a big corporation trying to make a bunch of money off of bands on tour and sell a bunch of Budweiser. That’s not how this is. We’re looking at the long, long-term ecosystem.”

Describing himself as a not-traditional developer, motivated by the goal of what he calls sustainable philanthropy, Moore has poured his heart and soul into the project. It’s in part to honor the wishes of his late mother, who wanted to see the site revitalized.

“How could I not do this project?” he said. “Sometimes it doesn’t even feel like I had a choice in the matter.”

As we all emerge from the other side of this pandemic, the timing of The Mill’s redevelopment and planned opening will hopefully give everyone in the community the lift they all need, right when they need it most.

Look for more on The Mill at Vicksburg over the coming months and years. Check out vicksburgmill.com.

Tweet
Published in Local Music
More in this category: « Making a Splash Top Five Local Albums of 2020 »
Login to post comments
back to top