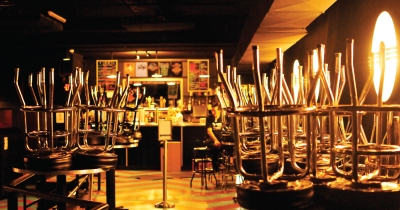 At the best show of my life, the sold-out crowd squeezed itself so tightly against the stage and each other that I could lift my feet from the tacky floor and still be held upright by the mob. After the encore, we stripped off our T-shirts and twisted out a soup of sweat onto a sidewalk surrounded by the stimulation of the city, gulping puffs of warm night air and secondhand smoke through our massive grins.

This place was exactly where I wanted to be.

That 1,000-person music venue and many, many more like it — up to nine out of every 10 — that connect the dots through U.S. towns and cities may soon be silenced permanently, according to the National Independent Venue Association (NIVA). But, there is some hope.

HOW IT STARTED/HOW IT’S GOING

The spread of the coronavirus pandemic and resulting lockdowns have disproportionately affected rock clubs, concert halls, and other live performance venues — so NIVA and its 2,900 member institutions have been pleading with federal and state governments for a bailout.

“We’ve been closed since March 12, and guess who is going to be the last to reopen,” said Scott Hammontree, operating partner at The Intersection in Grand Rapids and captain of the Michigan chapter of NIVA.

While many of the struggling businesses in the state have resumed operations and profitability in some capacity, venues are still closed and will be forced to remain bare and fruitless for the foreseeable future.

“We’re living off of our reserves. That doesn’t look like it’s going to last us too much longer,” said Hammontree, adding that the venue has lost more than $4 million in revenue this year. Furthermore, in 2017, The Intersection financed a major renovation which included the addition of two new basement venues to the building — the 1,101-capacity Elevation and the 150-capacity Mint.

“It really doesn’t help our position to have to make that (debt) payment every month while being closed and having zero income,” said Hammontree, who has worked at the venue for nearly 18 years.

In April, about a month after state governments condemned all public and private gatherings due to the contagion of COVID-19 and venues were forced to shut down, NIVA was formed by a small group of independent venue owners, managers, and promoters. Within days, the group’s membership ballooned to represent 450 venues across the U.S.

“I jumped in just to try to advocate and talk to our senators and representatives,” said Hammontree, who has been furloughed along with his 73-person staff since April. “I was super, super intimidated by that at first. I’ve never done that before, but I just found that it’s really easy to speak to them when you’re just telling your story; right now, that’s about people who lost their jobs. It’s become natural to me at some point, but it’s definitely night-and-day compared to what I used to do.”

Unlike other trade organizations, NIVA did not lobby against executive orders and lockdowns or spearhead a rallying cry to “get back to work” in spite of incessant transmission of the deadly virus. Instead, they asked Congress for targeted government funding, tax relief measures, and assistance to manage mortgage, rent, and other financial burdens for mom and pop venues across the country.

By July, Sen. John Cornyn (R-TX) and Sen. Amy Klobuchar (D-MN) introduced the Save Our Stages Act which would provide $10 billion in grants to help pay venue employees for a few months and keep the businesses afloat. The bill never gained much traction and was referred to the Committee on Small Business and Entrepreneurship, where it has lingered for months.

At press time, 15 venues in West Michigan — including Park Theatre Foundation in Holland, Seven Steps Up Live Music & Events in Spring Lake, and The Block in Muskegon — are among the ranks of NIVA. Hammontree said the danger to West Michigan institutions is imminent, however, he has not heard of any that will be forced to permanently close this year. Still, the losses are becoming overpowering to these entertainment hubs that act as important economic multipliers in local economies.

“It’s not an inconsequential amount of money that we bring to the state,” Hammontree said.

Michigan showgoers spent more than $667 million dollars at the state’s independent venues last year, according to a survey of Michigan NIVA members. Normally, that revenue and more recirculates throughout the areas where venues exist. A 2019 study by the Chicago Loop Alliance found that for every dollar spent at an independent music venue, $12 was spent at other businesses nearby.

In fact, arts and music venues are tried and true catalysts of revitalization.

“There is a reason they put Van Andel Arena in downtown Grand Rapids,” Hammontree said. The arena was raised in 1996 through a partnership between the Grand Rapids Downtown Development Authority, Grand Action, the City of Grand Rapids, and the State of Michigan as part of strategic positioning of the neighborhood as “West Michigan’s center of entertainment.” In February, the Downtown Development Authority approved funding for a $2.1 million beautification of the arena’s main entrance, which has been delayed but is still underway.

Currently, NIVA members in Michigan are collectively requesting $10 million from the state government, which is less than 2 percent of their reported economic impact, to act as a bridge to an eventual safe return to live events.

“Ten million dollars to help prevent the closure of businesses that create more than $600 million in revenue for the community is an astounding return on investment,” said Tami VandenBerg, co-owner of The Pyramid Scheme in Grand Rapids, which has lost more than $1 million in revenue this year. But, venues are risky business even on good days and profit margins are low, VandenBerg added. Most of the revenue is redistributed to staff, performers, and alcohol distributors. Hence the large economic impact of these institutions.

“We’re not asking anybody to replace everything we’ve given up, but if we could at least get help with some of our ongoing overhead so that we can survive and come up the other side of this, we’ll be extremely grateful,” she said.

The Pyramid Scheme’s 420-person live music room was operating for nearly a decade before COVID-19 choked West Michigan. That previous experience gives the company some edge, according to VandenBerg.

“Every week this goes on without help, another couple of venues fold for good,” she said. “I guess I’m grateful because I hadn’t really realized that we were in a little bit better of a situation than a lot of venues, but we do have nine years under our belt. If this would have hit us when we were younger, it would be a totally different situation.”

The overhead for The Pyramid Scheme and its sister bar, Meanwhile, is roughly $20,000 per month, according to VandenBerg. Since the onset of the pandemic, she and her business partner have been selling merchandise and offering up their coveted collection of pinball machines to month-by-month renters to make ends meet.

“The hustle is back on and that’s how we’re surviving right now,” she said. “We’ve always tried really hard not to depend on one revenue stream. We don’t come from family money and we don’t have people that can bail us out, so we’re used to hustling.”

Although all requests for venue-specific government aid have failed so far, the severe disruption and damage of COVID-19 seem to have a silver lining in the relationships formed in NIVA — most notably between fierce competitors like The Pyramid Scheme and The Intersection, which are just a few blocks from each other in downtown’s Heartside neighborhood.

“Scott (Hammontree) and I have gone after the same show many times and venues can get pretty cutthroat when going after the same acts,” VandenBerg said. “We’ll all compete again when the time is right, but right now, we know we just need to put everything aside and do what we can to make sure as many of us as possible survive.”

That includes non-music venues as well, according to Sarah Vesely, director of Wealthy Theatre in the East Hills neighborhood of Grand Rapids. The historic 400-seat auditorium is a mixed-use facility that hosts live music as well as film, theater and dance, and is losing about $30,000 to $40,000 in revenue per month.

“This community of venues and creatives in town is getting better and better at breaking down the silos,” Vesely said, adding that there has been a lively back-and-forth of information among NIVA members about small business grants and loans and best practices for streaming performances online. “We have been forced to be very creative and put our heads together and really work together, because we realize how important each of us is to a thriving city.”

However, the situation is still becoming more dire as local COVID-19 cases increase and people remain mostly isolated from each other. Even staggered openings are effectively a shutdown for venues, according to Vesely.

“Financially, reduced capacity does not work for independent venues,” she said. “Even if there is a vaccine rolling out, but we’re still forced to function at 75-percent capacity, a lot of spaces just can’t swing that.”

Likewise, if stages were authorized to reopen, the complicated process of planning touring events would make it impossible for venues to recover in a community that has not been “fully eradicated” of the virus, according to Vesely.

“If we have a COVID exposure from an event on a Friday night and I’ve got a sold-out show or maybe two shows on that Saturday, I can’t just close for cleaning and be back open Sunday,” she said. “We have to completely shut it down, refund all the tickets, and refund the rental. There are a lot more strings attached to these health guidelines with a venue that are way different than retail and restaurants and bars.”

Wealthy Theatre, which is part of the Community Media Center nonprofit organization, raised $10,000 in donations from supporters earlier this year and many other for-profit venues have also been successful at raising funds through crowdsourcing. NIVA raised more than $1.8 million in individual donations through a three-day virtual festival in October.

Last month, the organization announced the formation of The National Independent Venue Foundation, a registered nonprofit that will focus on finding additional fundraising streams for the collective group.

Lovers of live music, who are aching for their favorite rooms while confronting the reality that we don’t know when we’ll feel comfortable going to shows again, can support the cause by buying merchandise, donating funds or sending their respective representatives letters through easily accessible forms on the national NIVA website or through local chapters.

At press time, The Intersection’s Hammontree said the Michigan chapter of NIVA was in the process of launching their own “huge fundraising campaign” soon. The group had also filed paperwork with the state to form a new lobbying arm which will represent independent live music venue operators and promoters in the state legislature now and in the future. The organization has already hired Lansing-based lobbying firm Kelley Cawthorne.

In the meantime, Hammontree is still showing up to The Intersection’s vacant facility.

“I was working from home for a while, but then I came back to my building,” he said. “I like coming to work every day.”

Tweet
Published in Local Music
More in this category: « Top Five Local Albums of 2020 Five Bands to Watch in 2021 »
Login to post comments
back to top