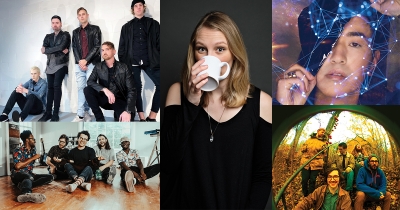 It’s pretty safe to say that just about everyone wants to put 2020 in the rearview mirror and look ahead to 2021. There may not be a group of people more eager to do that than musicians, who saw their incomes and livelihoods shattered during the pandemic. In hopes of better things to come, including an eventual return to live music, we here at Revue compiled a short list of just five on-the-rise local artists you should keep an eye — and ear — on as we head into this promising new year!

Made up of some serious scene heavyweights, this relatively new group has made its mark even without ever playing a live show. Launched in late 2019, TIMELESS never got a chance to get their timing right in 2020, missing out on their debut concert due to the COVID shutdown. But with a few lineup moves, including the addition of new vocalist Nickey Hills and bassist Ethan Osborn, the band stands ready to crank it up in 2021, with new single “Blood on Teeth” set for release in February, and a possible EP  on the way as the band works hard in the studio.

Although their name and vibe might fool you, Kalamazoo five-piece Basic Comfort challenge the moment we’re living in right now. With songs addressing racism, social justice, gender fluidity and more, the band faces the harsh reality of being a 20-something in the 2020s, with a jazzy sway and infectious grooves. From the atmospheric and experiential feel of their debut EP, to the pair of catchy singles they released last year while in quarantine, get ready for the group to keep pushing musical boundaries on the latest single, “Fed Up,” due out at the end of this month.

Consider her a girl interrupted. Singer-songwriter Sandra Effert had emerged with her excellent debut EP, River Rocks, in late 2019, leading into a phenomenal performance at the 2020 Jammie Awards last January, before the music world stopped completely. Turning online with her friend and frequent collaborator Patty PerShayla, she carefully navigated the uncharted sonic landscape of livestreaming, connecting and gaining fans virtually while continuing to hone her heartfelt songcraft. With features on WOODTV’s eightWest and NPR’s Michigan Radio to her name, she’s poised to present her extraordinary voice to larger and larger audiences once we’re all able to gather again.

One of the most unique voices in West Michigan’s increasingly diverse music scene, Shin Hoo Yong has been making music for almost a decade, but only recently really landed on our radar. Born in Seoul, South Korea, the young artist was raised on a farm in Greenville and turned to music as an outlet from the challenges of small-town life. Now an outspoken member of the LBGTQ+ community, the singer-songwriter has gained fans worldwide, with the 2019 debut album Kissing Boys, and five subsequent singles released last year. Continuing into 2021 with intention, Shin Hoo Yong will celebrate the Lunar New Year (Feb. 12) with a new single, “The Last Time.”

Something of the brainchild of singer-songwriter Ryne Clarke — who has issued an insanely prolific string of music in just a few short years from his bedroom studio — The Ryne Experience is a lo-fi project with sky-high ambitions. Just last year, the band released its third album, the concept record Funky Town, an EP, Homey, in the summer, and ended the year with another full-length, The Onion Tree, out Dec. 18. With songs to spare, Clarke and company are looking to up their recording game even further with the launch of an expanded home studio, dubbed Upstairs, Man Studios. Expect many future collaborations in the works as soon as it’s possible.

Tweet
Published in Local Music
More in this category: « Stage Fright: Venue Check-In
Login to post comments
back to top