In Bloom, In Isolation 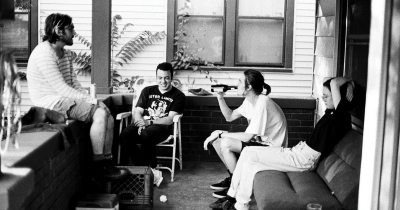 During the darkest times, the brightest flowers always find a way to the surface. And like its modest namesake, indie-rock outfit Pansy has chosen this spring as the time to emerge from the gloom with their long-delayed EP.

Made up of Grand Rapids natives Mat Hagger (vocals/guitar), Ben Abid (bass), and Danny Sein (lead guitar), as well as Cam Frank (drums/production) who moved to GR from Bloomfield at around 10 years old, Pansy has strong roots with the local scene.

After first meeting each other while still in high school back in 2014, the members of Pansy played together in different projects including Virgo, Ape Not Kill Ape, and Sojii. By 2016, the latter two bands both practiced at the same house, and as their mutual friendships and music started to overlap, their creative relationship grew together.

In 2017, Frank put together a six-piece live band for their solo project, Andrew Starr, which included Abid, Hagger and Sein.

“Around the same time, Mat started bringing guitar parts and vocals they had written as a young teen to Cam and shortly thereafter played a solo acoustic show,” Sein said. “Ben was in attendance and approached them afterward to express interest in playing if they ever decided to make a full band.”

Soon Frank had added drums to a few songs, and Abid joined on bass. Pansy played as a three-piece for a handful of shows before Hagger asked Sein to join on lead guitar and the songs gained a fuller sound.

“It was a natural progression since we all had chemistry from playing in various bands together and we are all adept with multiple instruments,” Sein said.

The band spent the next few years playing area bars, DIY spaces and house shows, like the now-defunct Workshop and Death House.

“The GR scene is mostly ‘small’ groups and solo projects who can’t sell out The Pyramid Scheme, so we need access to more DIY spaces that cops can’t bust for noise complaints,” Sein said of the band’s fond memories playing houses, including 845 Dallas Ave. SE where they recorded their six-song EP over just three days back in 2019.

Describing their sound as “four tiny bugs being wooshed around by warm air on a fallen leaf… (where) the bugs discuss traumas and eat sugary sweet candy,” the members of Pansy cite heavy influence from ’90s alternative music, particularly PJ Harvey and Sonic Youth. Although, they add that Abid had an R&B phase, Sein listens to old country, Hagger loves Fiona Apple’s Fetch The Bolt Cutters, and Frank is the group’s resident Deadhead.

Sadly, the recording of the EP was the last time the group played together in GR, as Hagger and Frank moved to Detroit the day after recording the live tracks for the album. Later, Sein and Abid moved to Chicago in 2020 with their other band, Rose.

“The recording of the album marked the end of many things for us in our lives, and it’s very bittersweet, especially looking back on that time now,” Sein said. “We are ready to focus on the new album, however we felt these songs are strong and deserving of a proper release. We can’t wait for it to be out of our hands and into the ether.”

Pansy will release their six-song self-titled album on April 2 on pansymi.bandcamp.com, Spotify, and other streaming platforms, as well as in physical format. Currently, the band doesn’t have any plans to celebrate the release with a virtual performance, as they’re still split between two different cities, but they’ve released music videos for the songs “Buried,” and “Pity Party,” in advance of the album.

“We have been very fortunate to work with other artists and close friends to make this album happen,” Sein said. “The collaboration with releasing music videos and art for our singles has also brought some freshness and perspective to these songs for us since we’ve heard them so much. Feedback from others interpreting the songs and art is the most interesting though, because to everyone that’s not in the band, the album is new of course.

“For Mat, the frontperson, listening to the album feels like looking back on an old journal, but that’s the beauty of art; it’s subjective, and becomes something for the listeners to interpret in their own way once it’s released. Mat had the courage to believe in these ideas and trust their friends with their songs, and we are so glad they did.”

Tweet
Published in Local Music
More in this category: « Healing Through Music Plan for the Worst, Hope for the Best »
Login to post comments
back to top