Plan for the Worst, Hope for the Best 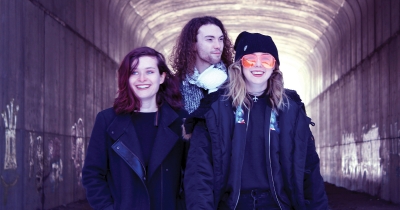 At this point in their career, there’s almost a certain irony to The Accidentals’ name.

The indie-folk band out of Northern Michigan first burst onto the music scene nearly a decade ago while still in their teens, after multi-instrumentalists/vocalists Savannah “Sav” Buist and Katie Larson met in high school orchestra class.

Both came from very musical families with connections to Interlochen Arts Academy here in Michigan, and Nashville. Things happened fast for the band, whose sound blurs the lines between their classical backgrounds, long-standing folk traditions, and their forward-thinking, alt-rock future.

Less than a year after self-releasing their second album, Buist and Larson joined up with fellow Michigan native percussionist/vocalist Michael Dause, who rounded out the trio in 2014. Together they started touring relentlessly, playing over 200 shows a year for the past six years, including gigs at festivals like SXSW and Electric Forest, while sharing stages with the likes of Brandi Carlile, Andrew Bird, and The Decemberists.

The trio signed with major label Sony Masterworks in 2017 before the release of their third album, Odyssey, and have gone on to have its music featured on Netflix, and even played strings for K-Pop superstars BTS.

But that success doesn’t mean things have always gone smoothly for the band.

“We are always emotionally prepared for the worst possible scenario, and we hope for the best,” Buist said. “I mean, it’s been 10 years of being named The Accidentals; we’ve been through a lot of crazy stuff.”

Well before the pandemic and lockdown ground the band’s plans for a year worth of touring and the recording of their long-delayed fourth full-length album to a halt last year, The Accidentals had more than their share of setbacks on the road to stardom, including an infamous incident in 2019 when their trailer and all their equipment was stolen while on tour in Arizona.

But turning to their faithful and growing fan base online, the band didn’t miss a beat. Raising over $40,000 via GoFundMe the group felt reinvigorated to continue after such a devastating setback, building a strong Patreon community online, and connecting with their fans on a whole new level.

“As soon as COVID hit, it was bam, we were home for a solid year and really forced to process our emotions and what was going on,” Larson said. “So it doesn’t quite feel like a year. It feels like a lifetime. And it also feels like we just blinked because our surroundings are the same. We’re so used to always moving around. But it’s been a year of reflection for sure.”

Using that forced reflection and isolation as inspiration for songwriting, the group began working on new songs for what became their new TIME OUT (Session 1) EP, due out May 7.

“We’ve been just constantly reflecting and trying to process the grief and trying to heal through that and find some hope,” Larson said. “I think a lot of people are feeling more hopeful right now, including us. And it’s kind of nice to be in this place.”

With immune-compromised people in their close circle of friends and family, the band made the tough decision to hole up together at Buist’s house in Northern Michigan, where they built a DIY recording studio in her attic out of blankets and unsold CD cases.

While some people were learning how to make sourdough bread, the band learned how to effectively livestream using OBS, with Buist publishing what has become something of a definitive manual online. That then led to unlikely collaborations under such unusual circumstances, starting with a co-writing opportunity with famed Nashville songwriter Kim Richey over Zoom.

The resulting song, “Wildfire,” speaks directly to the challenges of COVID times, lyrically wondering how to have gratitude for everything moving forward, while wishing time could almost turn back again.

“We felt like it needed to come first,” Buist said of the EP’s timely creation ahead of the band’s long-planned new full-length. “It was not anything we expected to do, but we’re flexible as we’ve always been. I mean, we’ve been through van accidents, trailer thefts, everything. We’ve had to be flexible.”

The whole experience of writing and recording “Wildfire” became the match that sparked the band to collaborate more than ever, co-writing with Richey, Dar Williams, Maia Sharp, Tom Paxton, and Mary Gauthier and Jaimee Harris for all five songs on the EP.

“Songwriting does a good job of summing up those feelings without spelling it all out,” Buist said of the new songs chronicling the social unrest and personal anxieties of 2020. “So it was nice to do that during the past year because this is something unlike most of us have ever experienced. The only comparable thing I have was the last time I saw my great aunt, when she let me hold her World War II ration tickets. And I had this feeling of reverence. I think the same feeling of reverence is going to follow us like a couple of years from now with our masks.

“It’s an interesting time. So it was great to be able to write with other people who, generationally we might be different, but experientially we were going through the same thing.”

Hopeful for the future, The Accidentals plan to follow TIME OUT with the release of their new album, Vessel, before the end of this year.

“The hope is that by October, things will be safer, people will be vaccinated, and we’ll be able to play shows again,” Buist said. “And that would be amazing. That’s the hope right now.”

Tweet
Published in Local Music
More in this category: « In Bloom, In Isolation
Login to post comments
back to top