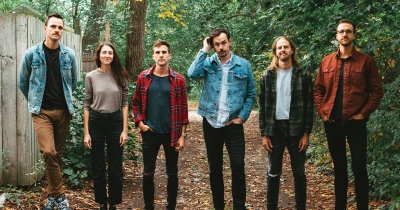 The Accidentals. Photo by Aryn Madigan

On the closing track of his new album, Grand Rapids singer and songwriter Jack Droppers ponders what it means to bring a new life into these unprecedented times.

The song, “Welcome To The Party,” serves as both the rousing finale for his band The Best Intention’s third album, entitled Dad Rock (due out June 18), and as a love letter to his newborn daughter, Naomi, who inherits a world filled with uncertainty.

“When my wife Elizabeth and I were talking about having a kid, it was just like, ‘Do we really want to introduce a human to this?’” Droppers said of having a child during a pandemic. “And at the end of the day, the answer was yes. We feel like there was enough love within our relationship to invite a kid into that. But it is sort of like, ‘All right, you’re here. There are some beautiful things about this world and there are some terrible things about this world, and you get to experience all of them.’ And so, the song sort of acts as the closing statement for the record.”

Starting out with opener “The Glory Days Are Now,” which Droppers said he wrote right before the pandemic, he begins the album with a question: “Am I willing to believe this moment can be a good moment?” It’s a question he in-turn answers on “Welcome To The Party,” by suggesting that even if this is a bad moment, it can still be good for us as a people.

The birth of his daughter and the creation of the new album coincided with each other all along the way, going back months, to before COVID-19 hit. So it felt only fitting to call the new record Dad Rock.

Like most millennials, Droppers grew up with a dad who was obsessed with music, and shared his love for classic “dad rock” artists like Bruce Springsteen, Jackson Browne and James Taylor.

“That’s sort of like my musical heritage growing up,” Droppers said. “And so those sort of sounds come more natural than some of the other stuff that I have tried along the way.”

Born in Grand Rapids but raised in Florida, Droppers first wanted to be in a punk band in high school, but says he wasn’t cool enough.

“Then Coldplay came out and I was like, ‘Oh, I want to write piano rock,’ but I can’t play the piano that well and I don’t have a British accent,” he said. “And then a couple of bands around that time came out, and I was like, ‘This sounds sort of like Springsteen to me. I can do this. This is OK for me to do, even though I’m not a 40-year-old guy.’ And for the last 15 years, I’ve been sort of doing that sound.”

Droppers returned to Grand Rapids for college and formed The Best Intentions there, independently releasing their debut album I Just Wanna Play Rock & Roll in 2017, and the follow-up, Bottled up Like a Neon Light, in 2019.

The new director at the Student Activities Office (SAO) at Calvin College as of January 2020, Droppers found himself spending a lot of time in his basement surrounded by instruments, and it was that initial isolation and loss of direction that compelled him to turn back to music.

Creatively, the new album also touches on what Droppers described as the common rock ‘n’ roll archetype of being out on the road, and the freedom that comes with it, particularly on the hard-driving, road trip-ready track “New Holland.”

Missing the socially inappropriate aspects of live rock music that just don’t carry over to virtual shows, Droppers said he’s very excited to get to release Dad Rock with a live outdoor concert on the Listening Lawn at the Studio Park Plaza on June 18.

“It’s going to be different in that it’s limited to 150 people, and they’re seated,” Droppers said. “So it’s definitely not like when you picture it being back, it’s not like that sweaty indoor venue. But we haven’t played in front of people in a year and a half by the time we get there. So there is this sense of like, ‘Oh, man, it’s going to feel wonderful.’ When we write songs, I picture where they will be performed. And so all of these tracks, we’re just aching to finally play them live and to feel the feedback from audiences. We do these silly live streams, and I just want someone to yell at me or spill their beer on me.

“I just long for that, those accidental exchanges that happen — just being with people and being able to feel how these songs sound outside of our own heads will be wonderful.”

Tweet
Published in Local Music
More in this category: « Plan for the Worst, Hope for the Best
Login to post comments
back to top