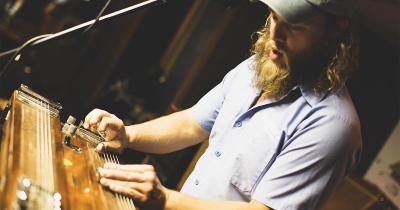 The Smiling Acres Music Festival couldn’t have picked a better person to serve as the face of the festival for its first year than local musician Mark Lavengood.

Affectionately known as “Huggy Bear,” Lavengood is beloved in the music community as much for his exuberant enthusiasm as he is for his excellent skills on the Dobro and guitar.

Officially the new festival’s entertainment director, Lavengood wears many hats over at Smiling Acres, and is a big reason why the festival is ready to happen this soon after a global pandemic.

Taking place July 2-4 on a 40-acre site in Trufant — approximately 40 minutes up and northeast of Grand Rapids — Smiling Acres will feature two days of live music.

Made up of almost entirely West Michigan bands and artists, the nearly two-dozen act roster will include sets from Lady Ace Boogie, Myron Elkins & the Dying Breed, Pink Sky, Earth Radio, Cabildo, Patty PerShayla & the Mayhaps, a tribute to the late John Prine, and many others.

“It’s just a really rich and diverse lineup,” Lavengood said. “It’s like you’re listening to an afternoon’s session on WYCE – that’s kind of the vibe.”

He added that Smiling Acres is definitely trying to emulate the feeling of some of Michigan’s longstanding music festivals like Wheatland, Blissfest, Hoxeyville, and Earthwork Harvest Gathering, while still creating their own unique space.

It was actually while performing at Wheatland many years ago that Nate and Rhonda Drews first came to know of Lavengood.

For over a decade, the couple had hosted informal Fourth of July gatherings on the plot of land that will now be home to Smiling Acres, and had always dreamed of turning their parties into a music festival.

About a year and a half ago, Lavengood relocated to nearby Coral, Michigan. He became fast friends with the Drews, and last summer during the pandemic, they got to talking about planning a brand-new music festival for the site. That led to the formation of festival’s organizing committee, and they’ve been hard at work ever since.

“We were getting our ducks in a row and planning and just waiting to see how the evolution of civilization would react and where we would be,” Lavengood said about preparing for the possibility of a large-scale event so soon after the end of quarantine.  “And here we are.”

Smiling Acres has currently capped its attendance at 400, on a site that Lavengood said could potentially hold 4,000–5,000 people in the future. Meaning, there’s lots of space to spread out and enjoy the scenery.

“We set the ticket cap at 400 to keep it smaller intentionally,” Lavengood said. “And we’re able to make it work because we’ve got lower costs being a first-year festival.

“We’ve pretty much been trying to find everything as affordably as possible. Nobody on the committee is making a dime from the production work, and we’re all working around the clock. We’re putting so much sweat equity in this thing. It’s inspiring me. I’ve been doing music and booking in and out of productions for the last 14 years, and I’ve never worked with a team that’s so committed and driven and able.”

Tickets to the two-day festival are $50 for adults or $20 for children and include space for on-site camping. The organizers plan to follow all necessary COVID-19 protocols to keep guests as safe as possible, and will encourage social distancing and mask wearing when necessary.

“The grounds bump up against 3,000 acres of state land, so if anyone wants to go explore and hike or bike or camp even, that’s all feasible,” Lavengood said.

Smiling Acres will also feature various craft and food vendors on site, as well as a fireworks display on July 3.

“We’re absolutely trying to cement ourselves as a longstanding force among the Michigan music festival scene,” Lavengood said, adding that the stage they’ve built for the festival literally serves as a strong foundation for its future growth.

“We’ve definitely got high hopes, and everything we’re building is leading into growth,” he said. “We’ll be set if we shoot for the stars and land on the moon. We’re just trying to get in orbit, baby, you know what I mean?”

Tweet
Published in Local Music
More in this category: « Post-Pandemic Party Rock 'n' Roll With the Punches »
Login to post comments
back to top