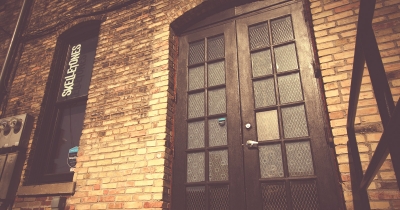 Over a decade after it closed in 2009, it’s impossible to describe just how influential and important longtime punk club Skelletones was to the Grand Rapids music community.

The all-ages venue hosted more than 1,800 shows during its initial run from 2001 to 2009, and served as something of a second home for many teenagers and young adults who felt otherwise alienated from the bar-dominated music scene.

Skelletones helped launch local post-hardcore bands La Dispute and Still Remains on their paths to international acclaim and success, as well as welcoming dozens of breakout touring acts before they hit the bigtime, including A Day To Remember, Against Me!, The Devil Wears Prada, and many others.

But ask co-owner and Skelletones icon Mark “Mirf” Leech what he remembers most about the venue and his answer is simple: the stories.

“The stories of lives that felt lost, and found a place — a people — to belong to,” Leech said when Skelletones closed in 2009. “So many different beliefs, musical tastes, hairstyles, come through these doors every weekend. The ’zines passed around here reflect a myriad of viewpoints, but yet this has never become cable news; one person in this box arguing with this person in this box. (There’s) so much diversity and openness. So much tolerance, learning, growing — community.”

Together with his wife and co-owner Annette, Leech began making plans in earnest to reopen Skelletones two years ago, following a successful tribute show remembering the venue that took place at The Intersection back in the summer of 2019, and a documentary film chronicling the venue’s final days — entitled We (were) Here — now available on YouTube.

“I think within a couple of months of us closing in 2009, I was already looking at spaces as a meeting place for our church, and all I could think was, ‘That’d be a great spot for shows,’” said Leech, who originally closed Skelletones in 2009 in part to focus on his life as a teaching pastor and new father. “So this has been in my blood. I feel like it just never goes away, even though I knew I needed to take a break back in 2009.”

Not wanting to go into work just as his small children were getting off the school bus in the afternoon, and return after 2 a.m. every night, Leech shifted careers for the past decade, but still sees a need for a place like Skelletones, perhaps now more than ever.

While listening to a podcast where punk legend “Fat Mike” Burkett of Southern Californian band NOFX recounted the hardships he faced as a teenager coming from a broken home, Leech found himself breaking into tears, and just couldn’t shake the feeling that he needed to do something.

“I see the kid with a Misfits shirt just wandering around downtown Grand Rapids and I think, ‘Where does that kid go?’ I definitely miss being that place where kids coming of age can go, maybe hear some ideas, hear some music, meet people they wouldn’t have met through the limited experience of their social media circle, or their high school or college.”

“This is the thing my wife and I lived for at Skelletones,” he added. “What always made Skelletones, Skelletones for us was not so much the music, but the people that the music attracted — both the bands and the kids that came out to see those shows, because these are kids that do fall between the cracks, and I know when I was 16, there weren’t a lot of places for me to go.”

Following Skelletones’ closure in 2009, a subsequent punk venue, The Mixtape a.k.a. MXTP, took up its former space at 133 S. Division, but failed to continue to connect with people in the same way. Leech said he had hoped that venue, or Take Hold Church’s concerts might fill that void during the 2010s, but like many all-ages spaces, both failed to pick up the torch Skelletones hoped would continue to burn, outside of underground DIY basement and house shows.

“It feels like there’s just been this vacuum for quite a few years that I was not expecting,” he said.

Oddly enough, the pandemic has worked in Skelletones’ favor, because it took any element of having to hurry up out of the equation. With months of remodeling required to restore its original location after years of damage and disrepair, Leech spread the word online of Skelletones’ return, where he raised over $10,000 of additional funds to help with the tens of thousands of dollars he’d poured into the recent renovations.

“It’s a lot of work, but we’ve already done it once,” Leech said of restoring Skelletones. “I remember being there back in 2000, on our hands and knees, sanding the hardwood floors and cleaning up the brick and having to learn things as I went… I had booked some shows in the ’90s in my 20s, but I hadn’t made a name for myself.

“This time around feels like artists and agents already know who we are. We already have a reputation that we had built in the past. So I feel a little better that we’re not starting from zero.”

Starting off, Skelletones will only be open on Friday and Saturday nights for predominantly local shows. The venue’s calendar is already booked through December, and while Leech is open to a wider range of artists taking the stage — something Skelletones had experimented with briefly back in 2004-05 when it changed its name to The End of the World Café — he plans to host mostly punk, metal, hardcore, and other heavy bands that have long become a part of the venue’s identity.

“We want a variety of artists in all types of genres and subgenres,” Leech said. “But our bread and butter, probably because of our name and that we have skulls on our sign, is probably always going to be the heavier or more avant-garde forms of music.”

Local hardcore band Bitter Truth will perform as part of Skelletones’ Grand (Re)opening Show on Sept. 10, helping to break in the space long-known for its incredibly loud and sweaty shows.

“I truly grew there and met a lot of my close friends there,” said vocalist Mnasse Tekle from GR hardcore band Bitter Truth. “My bandmates didn’t get to experience the years a lot of us did watching Skelletones grow to what it was and is, but the fact that they get to now means a whole lot to me. Especially with this new generation of kids with new local music coming out.”

Joel Otte, bassist/vocalist for Worst Self, who are also playing the opening show, echoed the importance of the return of Skelletones.

“All of our previous bands grew up ripping gigs at Skelletones,” Otte said. “Personally, I’m very stoked on Skelletones coming back. Being a recovering alcoholic, I have no desire to be a soundtrack for alcohol consumption. All-ages venues draw a crowd that actually wants to be there for the music. Hopefully the local scene can rally behind it and we can keep this venue around until my kids are ready to play their first gig.”

Looking to the next generation, Leech said his own kids are all excited about the idea of their family owning Skelletones, and hope to even work at the venue themselves, and share in creating a whole new era of unforgettable experiences.

“Probably every couple of days it hits me like, ‘We’re about to do this,’” Leech said. “It almost feels like when I was engaged — the closer I got to my wedding and all the details were done, and now you can just settle in, put the landing gear down, and get ready to enjoy it.

“I know it’s going to be a lot of work once we open those doors, but it’s work that I enjoy. It’s work I feel comfortable with when things go wrong in the middle of a show. I’m right in my element. I’m excited for the adrenaline rush of the show, and my wife, I think I can speak for her, as well as our kiddos — everybody is really stoked.”

Tweet
Published in Local Music
More in this category: « Rock 'n' Roll With the Punches
Login to post comments
back to top