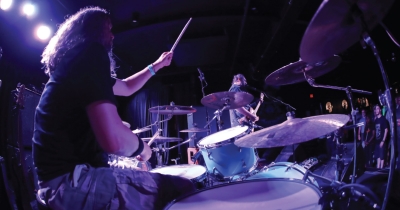 Describing themselves as a “two man army of riffs and thunder,” Tiny Tree defies its diminutive name with an onslaught of sound, whether onstage or on record.

Words like expansive, enthralling, and experimental, frequently come up when fans describe the band, whose online reach has extended across the world.

The band blends elements of progressive, shoegaze, and noise rock, to create an atmospheric aural experience easy to get immersed in and impossible to escape.

“Our live sound is really big and loud and fills the room, while sucking you into a soundscape,” Tiny Tree guitarist/vocalist Addison Eilers told REVUE. “The records are a polished version of our live show. For me, I love when a band’s record and live show are different. The bands that really let go live and refrain from cloning their albums on stage are the ones that impress me and inspire me.”

Formed back in 2017, the duo of Eilers and drummer/keyboardist/sample artist Paul Jensen first met randomly through a mutual friend.

“My roommate at the time introduced me to Addison saying something like ‘He’s a musical mad scientist, you will love him,’” Jensen said. “When I met Add, he was wearing a bachelorette tiara and working the soundboard at a show locally, and at that moment I knew this guy was gonna be fun.”

Both had played in numerous local bands and projects going as far back as the ‘90s and early 2000s, but had never played together before. They decided not to overcomplicate things by adding any other members, and instead began mastering the unique musical alchemy of their pairing.

Eilers said that when he was younger he learned that Scott Lucas of ’90s alt-rock duo Local H ran bass out of his guitar with a separate pick up, and ran with the idea, continually tweaking it to make it his own with Tiny Tree.

“When we started, we both wanted to play all the time and try to figure out what we were,” Eilers said. “Over time, we both have had aspirations of sounds and feel we want to explore, and that really drives us. For me, I am wanting to become a better vocalist and storyteller, while creating rich melody beds.”

After releasing a string of singles in 2018 and ’19, while hitting the road, Tiny Tree released its first full-length album, Embolism, in spring 2020, right at the onset of the pandemic.

“Honestly, at the time I did not expect the world to implode like it did,” Jensen said. “Maybe I was naive to the severity of everything going on, or hoping for the best, but I sure didn’t see it lasting so long early in the pandemic. Regardless, we had the album planned well prior to the April 1 release date, and I wanted to get it out because we were damn proud of it.”

Unable to tour in support of the album, the band immediately began working on new material, with Eilers spending much of lockdown crafting his own home studio. There, the band recorded what would become their second full-length, XI, after a month of steady writing. They released the album this summer, and will now finally play an official release show when they hit The Pyramid Scheme Nov. 19.

“In some ways, I think it’s a two album release show,” Jensen said. “A show for XI and for Embolism, which we really didn’t get a chance to support on a tour like we had planned. I know I’m looking forward to sharing the stage that night with some great friends, amazing musicians, and just having a fun fantastic evening with lots of smiles.”

One of those friends joining them for the show is former Butthole Surfers and Melvins bassist JD Pinkus, who also appears on the song “December” off XI.

“I became good friends with Pinkus while he was touring solo during the Embolism album writing process, and asked him if he would be down (for) guesting on a track,” Jensen said. “That album got pretty established without the addition of a guest track, and so I asked him again for our XI release, and we put together an instrumental jam that I felt would be perfect for some glorious dirty Pinkus bass playing, and (it was) extremely right in his wheelhouse.”

Having already started writing even more new music, and hoping to build on their rising momentum, Tiny Tree plans to head out on tour as soon as possible going into 2022.

“Our last real tour was down to the Carolinas and back, which was prior to the pandemic and was an absolute blast,” Jensen said. “I have missed the road doggin’ like we had been doing prior to Covid. Hopefully if all goes well, we can get out West and down South again, and maybe get another album out.”

Tweet
Published in Local Music
More in this category: « Resetting the Stage: Skelletones Returns Top 5 Albums of 2021 »
Login to post comments
back to top