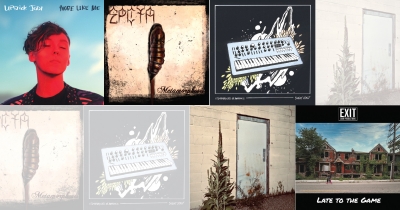 Filled with false starts and new beginnings, misinformation and revelations, 2021 failed to live up to its lofty promise of a return to “normal.” Instead, a newfound cultural obsession with the surrealism of both the multiverse and the Meta-verse foreshadowed a potential dystopian future filled with Deep Fakes and even more socially-distanced human connection.

Shaped and shaken by the long tail of the pandemic, the local music scene had its ups and downs, echoing the sometimes crippling sense of doubt that swept through the air, while artists returned to the live stage with an almost defiant sense of confidence, backed by the power of pure expression.

Ionia native and now Grammy Award-winning bluegrass superstar Billy Strings showed he believes in a tomorrow filled with music, both on his chart-topping new album, Renewal, and in his charitable donation of 200 guitars to his old elementary school here last month. Regional standouts The Accidentals emerged from lockdown with equal drive and purpose, issuing both the quarantine-crafted Time Out Vol. 1 EP and their highly-anticipated Vessel LP. Longtime hard-rock heavy-hitters Pop Evil spoke to the moment on radio hits “Breathe Again” and “Survivor,” off their sixth album, Versatile.

Representing his home state and his never-ending sense of resiliency, Kalamazoo indie rocker Michigander triumphantly took the stage at Lollapalooza in Chicago this past summer (one of only a few major music festivals to avoid cancellation or tragedy this year), while promoting his appropriately titled new album Everything Will Be OK Eventually. And the year even saw the surprise return of beloved GR icons The Verve Pipe, with frontman Brian Vander Ark welcoming his brother Brad back to the band, alongside a new lineup, for the group’s intricately-woven new album Threads.

With past and present colliding in a way that makes the future more undecided yet exciting than ever, here’s some of the best local music that sound-tracked our lives in this most indescribable year.

Driven by the ultra-catchy songwriting of lead vocalist/guitarist Karli Morehouse, GR indie-pop trio Lipstick Jodi has created a collection of inescapable choruses that uplift and inspire, even as they delve into difficult subjects. Recorded predominantly in basements over the course of quarantine, the record feels like a celebratory return to the world, with Morehouse painstakingly refining their isolation self-reflection into absolute synth-pop perfection. This year the band partnered with indie label Quite Scientific, landed in the pages of Alternative Press, and scored a viral hit with the remix of their track “Notice,” so consider this your sign to listen now.

No band defied boundaries, barriers, and borders quite like the bilingual rock of EPCYA. The GR group’s blend of genres, from ska-punk to metal to Latin, broke the band to a bigger audience just as live music returned. Singing in both Spanish and English, with members from Argentina, Mexico, and Michigan, the band has evolved in the four years since the release of their self-titled debut EP, but hasn’t lost an ounce of energy or attitude. With shifting rhythms and shredding guitar-work throughout – especially on the excellent closer “Science” – this is one epically awesome album.

Written almost entirely during the stay-at-home order, the internal exploration of Silent Spirit’s second record maneuvers across a virtual dancefloor, where time and space dissipate into sound. Ambient and imminent, the album’s driving undercurrent is all-immersive, even while remaining entirely instrumental, allowing the listener to dive into the downtempo vibes. The product of Grand Haven analog synth artist Jonas Quirin, the album encapsulates the unreality of right now in its enigmatic flow, so it’s no surprise that it’s followed with an equally necessary release of meditative field recordings entitled Surroundings, intended to help reengage with the physical world.

Born in the basements of Michigan State University’s college rock scene, and reared on the mean streets of Chicago, The Hacky Turtles had honed their mix of alternative and jam rock before relocating to Grand Rapids. However, their latest album, Dichotomy, is simply next level, with masterful playing throughout, only matched by the band’s sense of clever wit and constant hooks. Packed with singalong anthems aplenty, the collection encapsulates every aspect of the band’s sound, and plays like a perfect teaser for the band’s live show, which will hopefully get to return to full volume, far and wide, next year.

Serving as something of a calling card for Muskegon-based producer Jay Ingersoll of Exit Door Productions, this set of 17 tracks also works as a perfect primer to the underground lakeshore rap scene. Packed front to back with appearances from local MCs including D-Have, Xxdeucesxx, Jay Shyne, Latin J, and Tony Kappo – and that’s just on the killer opener “Pine Park Cypher” – the album boasts a range of styles and beats that touch on Ingersoll’s immense experience and love for the form.

Tweet
Published in Local Music
More in this category: « Tiny Tree: Growing In Isolation Bootstrap Boys: Riding Into a New Day »
Login to post comments
back to top