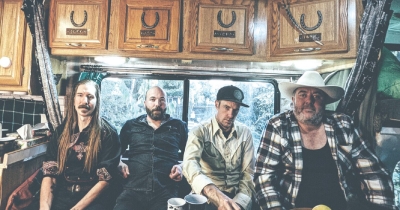 They say you can never really start over again.

But that sure doesn’t mean you have to stop learning and growing.

“A lot of times you get stuck in the basics of something, and country music is no different,” Stilson told REVUE when discussing his band’s upcoming EP, New Beginnings, due out Dec. 21.

“It’s just these three easy chords, and then you think, ‘Well, I can’t just keep writing in these same three chords all the time. I’ve got to push it a little bit.’”

Even though Stilson said he’s played guitar off and on since he was seven years old, last year he decided that lockdown was a great time for him to delve into the instrument.

He started taking lessons for the first time in his life, and just this past summer finished up a year of rediscovering the instrument that has been such a big part of his craft and trade for years.

“I learned a whole bunch about why I made the choices I made musically or sonically on the guitar,” he said. “I studied theory a little bit, and I’m still taking the lessons. I don’t have any plans to quit. I’m learning a whole bunch all the time, and I love it.”

Stilson started writing songs and performing in public spaces when he was around 16, after growing up singing in church.

“I was probably like the first male version of that little girl from Prancer, but eventually other people liked to hear me doing it,” he joked about his early singing. “Probably I initially enjoyed the attention, and then I couldn’t stop, you know.”

He started writing songs, and spent a lot of time working on predominantly singer-songwriter and rock projects before he and a group of mutual friends decided to form The Bootstrap Boys in 2015.

Describing their sound as “90 proof country for Saturday night and Sunday morning,” The Bootstrap Boys started gigging out, and hit the road as hard as they could. The band became something of a family, with all the members adopting the Bootstrap last name.

The band released their debut EP, Country Songs for Sale, that year, and followed it up with their first full-length record, All Boots Aboard, in 2016.

Hitting the road in their beloved RV nicknamed “The Delta Dawn,” The Bootstrap Boys returned with their second album, Between The Hat and The Boots, in 2019. During the tumultuous time since, the band decided to part ways with their previous standup bass player, Josh McBryde, aka Clyde Bootstrap.

“Post-COVID, obviously we’re all kind of starting over,” Stilson said. “I think we’re all at a place where we’re taking this a lot more seriously. I thought we were taking it seriously, but you learn more every day, and you realize, ‘Wow I probably should do more,’ whereas looking back there was a lot of could’ve, should’ve, and I don’t want to do that.”

During the pandemic last year, the band kept surprisingly busy while only playing socially-distanced outside shows where they felt everyone was safe.

“It was a strange situation,” Stilson said. “We’re playing a private party, and there were maybe 100 people there and they were just spread across a huge multiple acre field. It was a weird vibe playing to people spread out that much. We’re used to being crammed into a tiny honky-tonk bar.”

Earlier this summer the band welcomed fans to Cedar Point as they performed on the amusement park’s Frontier stage during its opening weekend, cranking out 15 sets in less than 52 hours.

“They wanted us to come back and do it again, but we were unable to,” Stilson said. “Which was a bummer, because it was fun. You get to ride roller coasters, and everybody all day was just cheers and laughter.”

Throughout this year, The Bootstrap Boys also recorded songs for New Beginnings at River City Studios in Grand Rapids with Austin Ruhstorfer.

The upcoming six-song EP features a string arrangement for the first time on any of the band’s previously unpolished songs, and some other new musical explorations as well.

The Bootstrap Boys will release New Beginnings with a Winter Solstice party at The Listening Room on Dec. 21, an event Stilson said he feels will be pivotal for him and the band.

“It’s the darkest day of the year,” he said of the solstice show. “It’s before Christmas. It’s a new beginning. It’s where we turn towards the sun. From there it only gets brighter.”

Tweet
Published in Local Music
More in this category: « Top 5 Albums of 2021 Ten Bands to Watch in 2022 »
Login to post comments
back to top