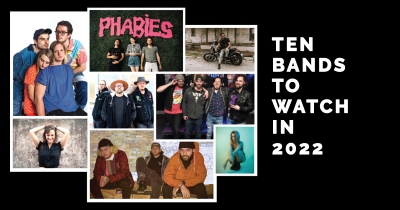 There’s nothing normal about the so-called “return to normal.” And there’s definitely been nothing normal about the return of live music, which has suffered through fits and spurts, as endless, elusive variants and shifting public health policies have made it nearly impossible to resume concerts in any sort of confident, conventional fashion. That hasn’t stopped the many talented musicians in our area from pursuing their passions by any means necessary: digital, virtual, remote, or live on stage, sharing their songs to eager listeners everywhere, and pushing forward into the better future we all hope is just around the corner. Here are 10 local bands doing exciting things in 2022.

The term “super-group” is totally loaded, but wholly appropriate when describing the sky high potential of Low Phase. The combination of lead vocalist/guitarist Caleb Waldvogel of popular local act Political Lizard and Marley Ferguson of Marsfade (and formerly half of PARTS), alongside bassist John Bomer and drummer Miles Ferguson, the four-piece tackles the perils of growing older and balancing relationships with beautiful melodies. They’ve been hard at work at Planet Sunday Studios creating a series of singles, set to accompany a tour launching this spring.

Versatile doesn’t go far enough to describe the multi-dimensional talent of rising singer Minny Niiche. Her debut album, Niiche, released late last year is anything but niche, broadly appealing to a huge range of music fans, with bumping rap anthems, emotional piano ballads, and even full-blown pop-punk. Already co-managed by Ice T’s East Coast manager Mick Benzo, Niiche has taken the stage alongside legends like Cypress Hill and Too Short, and is well on her way to making a name for herself.

Sebastian and the Mood

Channeling the enduring legacy of Bruce Springsteen to Gen Z, via an adolescence spent with the sad boy angst of My Chemical Romance and Fall Out Boy, Sebastian and the Mood is all about maintaining the mission that music is a celebration of life, with all its ups and downs. They display their dynamic range and soaring guitar work early and often on their debut EP, Ode To Joy, released last fall, and stand poised and ready to take their sound to the next stage.

Immersed in the EDM scene, vocalist/DJ/producer Veronica Eileen has quietly released a string of singles since 2018, maintaining an air of modest mystery around her mostly chill vibes. Working on her own and as a frequent collaborator with artists both local and international, her voice has an enigmatic eeriness that accentuates the emotion at the heart of her powerful tracks, helping her to rack up thousands of streams on Spotify, and taking her unique sound into the ears of even more listeners.

RIYL: Frank Turner, The Head and The Heart

Sometimes tragedy turns into the greatest form of inspiration. Turning his back on music after the death of his best friend and former drummer, Edison Kitt returned to his guitar, writing a song in the folk tradition of troubadours like John Prine. That song led to another, and ultimately culminated in Whiskey Ramblings, a set of late-night barroom tales and sunrise optimism. Together with his band The Strangers, expect to see Edison all around town, from bars like Mulligan’s (where they’ll play Jan. 8) to festivals everywhere this summer.

Launching during the height of the pandemic and social unrest of summer 2020, Flooded Kids hit fast with their first single “No Option,” featuring Mitch SQ from local alternative R&B trio deadflower. They followed it up with the bass-heavy dancefloor anthem “Bnce,” and cranked it up this past year with the Halloween release of their EP “DND.” Heading into next year, the multiple MC group plans to test even more boundaries and push to new heights. Take this as your flood warning.

Originally the creation of artist Lauren Hobson, PHABIES came to life in 2018 when she joined forces with guitarist Garett Stier and drummer Joshua Holicki. They've expanded their unique sound ever since, exploring the spacey side of folk music across two EPs in two years, and two singles this past year, “OMG,” and “Crazy To Love You,” with Cincinnati singer-songwriter ZOO. This fall, the band opened for the amazing Joy Oladokun at Calvin University, and plans to release their full-length debut album sometime this spring.

There’s a reason singer/songwriter Rin Tarsy titled her debut album Paradox. Conflicted with her career, her faith, her relationship, and her life right now, the album creates beauty out of conflict, and carves a perfect place for her to shine on her own. Well versed from playing everywhere from street corners to the Wealthy Theatre, Tarsy has honed her talent, swinging from jazz to bluegrass to ballads with a calm confidence to her voice that overflows with effortless charm.

Pop-punk underwent something of a renaissance and a revival in 2021 (seriously, Travis Barker was everywhere!), proving that the genre has long outlasted its expected lifespan and inspired a new generation. Keeping the spirit alive here with plenty of high-octane guitar riffs and tongue-in-cheek lyrics, Some People’s Kids injects new energy into the style first popularized in the early 2000s, supporting their 2020 debut album, Hindsight, by playing shows everywhere they could, and gearing up for an even busier 2022.

Just listen to their cover of “This Is Halloween” and you’ll get the dark, often comedic storytelling at the core of Colt Snuffer & the Dead Horsemen. They have roots in the hardcore scene, but a predominantly acoustic sound broad enough to feel just at home at Bell’s Brewery as Skelletones. With an album, The Devil You Know, out now, their timeless, ominous vibes are just as suited for Halloween as they are the dead of winter.ν

Tweet
Published in Local Music
More in this category: « Bootstrap Boys: Riding Into a New Day
Login to post comments
back to top