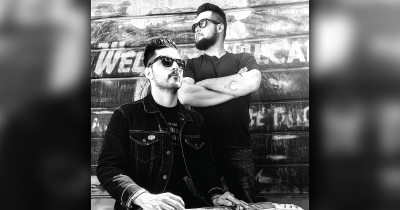 The pandemic affected everyone in different ways. But for a high-octane, full-volume live act like Grand Rapids’ own Jesse Ray & the Carolina Catfish, the experience was particularly terrifying.

“It felt like our entire way of life was just done,” vocalist/guitarist Jesse Ray Cahue told Revue. “It was scary to think about how live shows would be going forward, like, would everything be livestream or what? Going through it all seemed like there wasn’t going to be a light at the end of the tunnel.”

After years of grinding, the duo – which also includes drummer Brandon “Dingo” Hopp – had only recently gone into rocking full time, just a couple of years before COVID-19 hit and devastated the entire live music industry.

“We were separated from March 2020 to May 2021,” Ray said about how the band was pushed to the brink during the pandemic. “Dingo went back home to the UP (Upper Peninsula) to work construction, and I quarantined with my wife up in Rockford. Both of us were fortunate enough to maintain steady employment through the pandemic, and we maintained a strong relationship through phone calls. We actually started scheming about this record mid-2020, and we were lucky enough to see that through.”

Lockdown allowed the band more time to think about lyrics and structure than it ever had before, refining their self-described “black tie garage rock” sound, and giving them an even greater appreciation for what they’ve been building as a band.

“We’re definitely more creative now,” Ray said. “We felt more inspired while writing and recording this new album than we had in past recording sessions. Our skills did not dissipate, so much as went dormant during the lockdown waiting only for new experience to manifest themselves.”

Teaming up with Onama Media Group, Jesse Ray & the Carolina Catfish are set to release their new self-titled album, JRCC, on limited-edition vinyl, CD, and digital on April 22, with an album release show hitting The Pyramid Scheme the following night, April 23.

“It’s badass, and we want people to hear it,” Ray said. “It’s the most honest and musical record that we have to date. The thought and effort we put into it compared to what we’ve released in the past is a huge accomplishment for us and we’re proud of our work.”

JRCC is the band’s fourth full-length release, and continues to crank up the energy. Recorded with Addison Eilers at Analog Time Machine in Montague, the set blends the band’s signature rockabilly rhythms with bluesy guitar licks and a punk rock edge.

While working on the record, Ray said he listened to a lot of Daddy Long Legs, Faces, and ZZ Top, while Hopp leaned heavier, turning to bands like Tool and Jack White supergroup The Dead Weather.

“Honestly it’s like riding a bike,” Ray said of coming back to the live stage post-lockdown. “I thought at first we may have lost our chops or forgotten material, but the second that first note was struck in a live setting it all came flooding back.

“The scene is coming back and growing,” he added. “We are starting to see bands play shows, people going to shows that wouldn’t have gone to them before. A new interest in music written during the pandemic that people are really embracing. It seems that, post-pandemic, people have a more positive outlook on music and they seem even more excited about live shows now than ever before.”

Gearing up for a big 2022, Jesse Ray & the Carolina Catfish plan to follow past gigs opening up for the likes of Brian Setzer at Meijer Gardens and JD McPherson at The Pyramid Scheme, with even bigger shows both locally and out on the road.

“We want to push this record and be open to taking opportunities we didn’t have in the past,” Ray said. “Hopefully we can make a career out this.”

Tweet
Published in Local Music
More in this category: « Ten Bands to Watch in 2022 Crooked Spires: Twisting Towards Musical Ascension »
Login to post comments
back to top