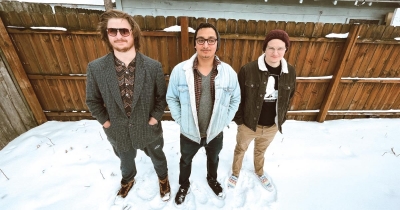 If there’s anything the past two years have taught us, it’s that the world can be a chaotic place. Thankfully, music can help make sense of it all, in its own harmonic way.

For Christian Nikkel, vocalist and guitarist of Grand Rapids band Crooked Spires, songwriting emerged as the only silver lining in an otherwise dark, uncertain time, that saw his band’s shows cancelled and the music industry grind to a halt.

“We were lucky to have a lot of new material to work through that provided some vision for the future,” Nikkel said about the songs that have now become Crooked Spires new album. “That helped a lot.”

From early 2020 to early 2021, Nikkel spent the height of the pandemic holed up working on writing and recording new music together with his bandmates drummer Thom Vandervelden and bassist Jude Lolley.

“The new album reflects more of the tumultuous state of the world at the time it was written mid- pandemic, in comparison to its earlier sibling,” Nikkel said. “(It) grapples with concepts of rampant mass misinformation and general chaos, as well as personal reflections on finding meaning through hardship, class consciousness, and some sense of lament through hope may be present.”

Titled Stroke of Havoc, the new album follows Crooked Spires’ 2020 self-titled debut. It was self-recorded by Nikkel at Third Coast Recording Company where he works as a freelance assistant engineer. It will include seven songs, and showcase several guest appearances from fellow local artists Jordan Hamilton, Via Mardot, Patty Pershayla, and Dutcher Snedeker.

“I’d say our early sound was pretty heavily soul, roots and psych-folk influenced,” Nikkel said, citing bands like Unknown Mortal Orchesstra and White Denim as his inspiration for starting a band that could shapeshift and experiment with changing sounds.

Originally started as a solo songwriting project while he was still in college, Nikkel met Vandervelden in late 2016 through mutual friends, after they both picked up some instruments together during a bonfire.

“I had been playing in bands as guitarist or bassist most of my teens and 20s, and had been writing up until that time, but in general I had become discouraged at finding the right fit for the project until we connected,” Nikkel said.

Things progressed slowly at first, but the more they played and wrote together, the more things started to pick up, and the band began to find its own identity as it started playing shows.

“I think our sound has taken a bit more of an alternative rock direction in recent years as we let our 90’s influence take hold,” Nikkel said, referencing bands like Soundgarden and Queens of the Stone Age. “Our dynamic as bandmates has definitely been elevated over the years as we’ve gotten to know each other and what we can achieve.”

Always striving and reaching upwards, the band’s name is a reflection of both its approach, and its philosophy.

“Initially, I had liked the name The Spires because of the simplicity and image it evoked, a summit or pinnacle,” Nikkel said. “Maybe something that feels insurmountable at the time, the way that life can. But it was already taken by another band, so Thom had the idea to prefix Crooked, maybe adding a sense of the brokenness in some of the music.”

Pushing themselves to new heights and new sounds with their new record, Crooked Spires hope to get their name out there even more this year as concerts continue to return, including their album release show for Stroke of Havoc on May 28 at The Pyramid Scheme, and more to come this spring and summer.

“I can honestly say that we’ve pushed each other and grown tremendously through the natural ups and downs of life and making the choice to stick it out no matter what,” Nikkel said. “The band has allowed us to explore sides of self-expression that might not have otherwise been possible without the chemistry that has allowed it. I also think that being able to put yourself into something completely and get lost in it can show or bring light to things that can be obscured much of the time.”

Tweet
Published in Local Music
More in this category: « Jesse Ray & The Carolina Catfish: Signature Rock 'n' Roll Together We Jam: The Jammie Awards XXII »
Login to post comments
back to top