Together We Jam: The Jammie Awards XXII 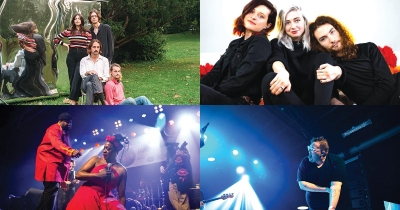 It’s an event more than two years in the making.

Cancelled in both 2020 and 2021 due to health safety concerns surrounding COVID-19, the Jammie Awards — presented annually by 88.1 WYCE-FM — is finally back, and bigger than ever.

Kicking off with a special pre-Jammies concert at the Listening Lawn in Studio Park on June 25, the all-day celebration of music will then take over all three stages inside The Intersection, with 25 performers in all taking part.

“It truly is a community event,” WYCE Music Director Shane German told REVUE. “It’s a great reminder of WYCE’s commitment to supporting local artists, local organizations, and to have our listeners and supporters show up and celebrate Michigan Music. There’s a sense of pride to it. There’s always good energy and lots of love and support in the room.”

Excited to have the Jammies in the warm weather of June, instead of navigating the near-blizzard conditions the event often encountered when it was typically held in February, German said this year feels extra special.

“As always, a mix of genres will be on each stage, so attendees can catch a multitude of options and celebrate the diversity in our music community,” German said. “Some first-time performers mixed with some who have performed before, and even some who are known nationally. There will be special surprises through the night, and we always love it when performing artists collaborate on special sets and perform together.”

Founded in 1999, the Jammies have become an annual celebration of local and regional music. The awards have helped showcase the best and brightest in our area, honoring a wide range of artists. Past winners have included everyone from GR legacy acts like The Verve Pipe and Mustard Plug, to The Accidentals, Lady Ace Boogie, Jordan Hamilton, The War & Treaty, and many, many others.

“When The Jammies started in 1999, the original event was such a new idea, that the awards were primarily focused on national releases and artists,” German said. “Fast forward to over 20 years later, it now stands as the premiere event to showcase the extremely talented and diverse Michigan music community – many who are professional artists that are not only extremely prolific and successful locally, but in many cases are also getting national exposure. WYCE is proud to be a community radio station that provides a platform on-air for these regional artists to be heard.”

With the last two years affecting recording and release schedules, German said they decided to change things up this year and make the Jammies more about celebrating collaboration than competition.

So WYCE partnered together with Michigan Music Alliance to present The Ovations, a first-ever award of its kind that focuses on the community the music scene has built, and the individuals who contribute to creating it.

Different awards will be handed out throughout the night, concluding with the Artist of the Year Award, decided by over 3,000 public votes received at the end of last year.

“I was just impressed with how everyone came together to support artists’ virtual sessions and online concert events,” German said. “I know how difficult things were for WYCE, I can only imagine how tough it was for musicians who just couldn’t do things in a normal way that they were used to. And they still created some pretty phenomenal music in those circumstances. It truly showed the resilience of our music community, and I’m just so proud that WYCE is a place that provides that platform for their music to be heard.”

Non-commercial, volunteer-powered, and listener-sponsored, WYCE is a completely independent community radio station. The Jammies help raise awareness and donations for the station, so it can continue its great work, sharing the voices of artists in our community, and informing the public about local nonprofits and other events.

“I think if anything, the last couple of years have taught us a lot about how special our connection with our listeners and supporters is,” German said. “Many people tuned in while things were shut down and we kept the music going through very unusual times. We received so many great messages of support thanking WYCE for the music. It was a saving grace for a lot of people.

“I think because we took a couple of years off, the spirit of community will be on display and lots of people will be able to reconnect, and we’ll be able to feel connected as a music community who all weathered something together.”