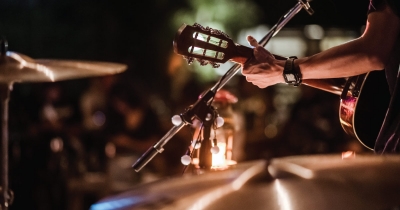 When Revue asked Scott Hammontree, partner and talent buyer at The Intersection in Grand Rapids, how he feels about bringing live music back to West Michigan over the past year, he says he feels like the luckiest guy in town.

“It’s the best anti-depressant you can get,” he said of the feeling he gets watching a capacity crowd fill one The Intersection’s four performance spaces, following the lockdowns of 2020, and the false starts of 2021.

“It’s hard to describe the first shows back, but I felt like we were hosting our first shows all over again,” Hammontree said. “The very first show back in July of last year was emotional for all of us. I stood outside and greeted the line as they came in, high fives everywhere. Then went to my office and cried. Nothing like that feeling of getting back to what we do.”

Together with his team – made up of Chad Verwey, Damon Campbell, Jimmy Rains, and David Lebin – Hammontree has put forth a huge effort to fill up his venue’s schedule of concerts to pre-COVID levels.

“From a venue level we had a solid end of 2021,” he said. “Our revenue hasn’t returned to the level it was at, unfortunately. With tours still grappling with COVID and rising case numbers at the end of 2021, we didn’t get a chance to host as many shows as we would have liked to in the first six months of 2022. It felt like a lot of tours were hitting major markets first.”

During the heart of the pandemic, Hammontree and other venue owners, operators, and promoters founded the Michigan Independent Venue and Promoter Association (MIVPA), a 501 c (6) trade association, focused on organizing, collecting funds and helping support the live music industry in the state. The group pushed for aid, and through its efforts, saw the Michigan State Legislature pass $3.5 million in grants of up to $40,000 for live music and entertainment venues.

Now the president of the MIVPA, Hammontree said he’s proud of the work the group has done, and feels like the industry is better prepared for the future, even in a hopefully post-pandemic world.

“I think the foundation that was laid by the formation of MIVPA will pay dividends for members and the industry moving forward,” he said. “The pure will and ability to set aside competitive nature to work towards whatever crisis our industry is, was, or will be facing has been shown. I think as we hopefully return to ‘normal’ you will see MIVPA start tackling more issues that are shared among members.”

Some of those issues include staffing shortages and touring artists struggling to avoid COVID-19, as well as some audiences who remain hesitant to return to large crowds with the virus still out there.

“The biggest challenge when first reopening was getting concert-goers on the same page,” said Nicole LaRae Leach, director of Programming and Production at the Kalamazoo State Theatre. “There were safety policies in place and we needed the fans to abide by them in order to attend events. Not only were venues requiring proof of vaccination and/or masking, the touring artists were as well. Many folks couldn’t bear to abide by these simple requests, so dealing with the public became a lot of extra work.”

LaRae Leach explained how she understands why the so-called new “normal” doesn’t feel that way for everyone, both onstage and off.

“It feels like the collective awareness of those outside of the industry is one of, ‘Well, it seems like everything is back to normal,’” she said. “And I can tell you firsthand that is not the case. Independent venues are still shuttering, concert promoters are still struggling and touring routes have shifted. Tours are still being postponed or completely cancelled altogether. COVID is still here. (But) certainly, the live music industry is ready to keep chugging along at full speed, especially after two-plus years away.”

“There's an inherent tension in every decision both as a promoter and artist, between what holds the most weight,” said Jack Droppers, director of Student Activities at Calvin University, and frontman for his band, The Best Intentions. “An incredible rock show can simultaneously be the most important thing in the world, and mean absolutely nothing at all. Both as an artist and as a promoter, those self-doubts creep in, and you have to keep telling yourself, ‘I’m doing the best I can,’ because every decision is going to make someone angry.”

Admitting that he knows many friends, artists, and promoters who have had it worse, Droppers shared his frustration at having only eight of the 12 concerts booked at Calvin actually happen last year, and how he’s hopeful for this fall, kicking off his first full slate of shows since taking on his role at the university right before the pandemic began in 2020.

Quinn Mathews, director of music and programming at Studio Park, and talent buyer at The Listening Room, had a similar experience, spending nearly two years preparing for the new venue to open in the fall of 2019, only to have everything close down just five months later in March 2020.

“It was 18 months before we had a true show back in there, and I think about that every night I’m in the room with an artist and a crowd,” Mathews said. “You don’t build a stage to have it just sit there without any feet on it.”

Now Mathews said he doesn’t have a weekend left open for 2022, and explained how so many acts, local, regional, national and even international, are all trying to get back out and play after missing the connection that only comes from playing in front of a live audience.

“No one grows up and gets their first guitar and says, ‘I can’t wait to do this in front of a camera phone so people can watch it on a screen,’” Mathews said of the virtual concerts that served as stopgap for many artists.

“I think many things have crossed over OK as virtual, but music has not,” said Tami VandenBerg, co-owner of The Pyramid Scheme and The Meanwhile. “There is no replacement for being in the room with the musicians and other fans.”

She explained how many of the shows back have been both extremely energetic, and very emotional.

“Personally, I have a whole new appreciation for our work — the joy and community it brings,” she said. “The escape from so much difficulty in the world right now, I appreciate my profession more, my venue more, and everyone involved more than ever, especially our staff who stuck with us through some very dark days. I won’t forget them.”

VandenBerg added that this past May might have been The Pyramid Scheme’s best month on record in terms of attendance and revenue.

“I feel beyond lucky to do what I do, and I’m overwhelmed with gratitude for everyone who helped us make it through the pandemic,” she said. “So many of my friends and colleagues lost their businesses over the last two years, and I feel so incredibly lucky that both of our businesses survived. We worked extremely hard, but so did many others who did not make it through.”

“I’ve been known to cry at concerts, and now I cry at every single one,” LaRae Leach said. “We need to remember how close we came to losing it all forever – and how some people and places did. I feel incredibly fortunate to be able to do this kind of work. Music is the language of the world and is the great connector, it is the glue that brings us together, and as cheesy as that may sound, I don’t care because it is the truth.

“Should you find yourself at a concert in the near future, please take a moment to pause and think about how many pieces had to align for the event to come to fruition,” she added. “So much sacrificed, so much risk, so much determination. From the performers, to the promoters, to the venue owners, to the production crews – it has been a rough road. Show your appreciation by showing up and supporting these events. It is crucial now more than ever before.”

Tweet
Published in Local Music
More in this category: « Brie Stoner: Motherhood, Meditation, Mysticism and Music 10 Bands Heating Up This Summer »
Login to post comments
back to top