10 Bands Heating Up This Summer 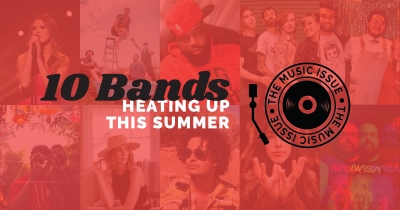 Live music has returned in a big way, and shows no signs of stopping again any time soon.

So to get everyone up to speed on the many, many bands and artists taking the stage here in West Michigan now that lockdowns and other strict COVID restrictions seem like hopefully a thing of the past, we decided to compile a quick list of just a few acts that showcase the strong range of talent right here in our area.

Now get out, feel the rhythm live and in-person, and just maybe, remember how music helps us all connect after being so socially distant.

Ada Leann
The Michigan representative on NBC’s American Song Contest this spring, where she reached the semifinals after winning the jury vote, Ada Leann has already earned a lot of national attention, with some calling her a “young Taylor Swift.” At just 17-years-old, she’s released two EPs, along with multiple covers, and has performed all across Michigan, including at Kalamazoo’s New Year’s Fest. She has a big summer ahead of her, with a new single, “Get Over U,” coming out before she serves as the Grand Marshall of this year’s Traverse City Cherry Festival Parade on July 9.
Hometown: Battle Creek
Genre: Pop-country
Recommend if You Like (RIYL): Taylor Swift, Maren Morris

Bad Friends
With their tongues planted firmly in their cheeks, Bad Friends are serious about not taking things too seriously. Pushing along the wave of the current pop-punk revival, the band wraps its early 2000s nostalgia in post-millennial urgency, updating its anthemic sound for a whole new generation. With sarcastic lyrics to spare, twists of traps beats and more, look for the high-energy act to release their EP, “Give Me A Reason” on July 1, or catch them live at Turnstiles July 16.
Hometown: Newaygo
Genre: Pop-punk
RIYL: Newfound Glory, All Time Low

Alfie Da Great
Alfie Da Great effortlessly mixes old school feel with contemporary vibes. His rhymes have an instantly timeless quality, tapping into real truths and tough topics with a flow that can tackle anything. His debut album, “Vintage Premiere,” has racked up tens of thousands of streams online, earning him a Jammie nomination, and new fans by the day. Check out his latest single, “Drummer Boy,” now, or keep an ear to the ground for his collaboration with Sid Swift entitled the Satchel Paige Project.
Hometown: Grand Rapids
Genre: Rap, hip-hop
RIYL: Meek Mill, Schoolboy Q

Mooch Globe
In just a year’s time, Mooch Globe has taken the local punk world by storm. The band has exploded onto the scene, cranking up shows at Skelletones, Mulligans, The Pyramid Scheme, Turnstiles, and more. Made up of lead vocalist Rachel Burns, guitarist Eric Essick, bassist Jon Ayers, and drummer/vocalist Jim Dawson, the band describes its raw sound as garage femme punk, with direct DIY influence coming from the Riot Grrrl era of the early ’90s, colliding with the post-pandemic tensions and turmoil of the 21st Century.
Hometown: Grand Rapids
Genre: Punk, Grunge
RIYL: Bikini Kill, GRLwood

Cheap Emotion
There’s no denying the depth of feeling behind the music of Cheap Emotion. Originally started as the solo project of singer-songwriter Devon Cline back in 2014, the band has taken on its own shape, with equal influence coming from emo and indie rock. Melancholic yet aggressive, the band’s lyrically-rich songs feature finger-style guitar playing that fascinates, especially on their sophomore album, “Raumplan,” released this past spring. For those who like music that wears its heart on its sleeve, while getting lost in complex compositions, this is definitely a must listen.
Hometown: Grand Rapids
Genre: Emo, experimental-indie
RIYL: American Football, The Front Bottoms

Grace Theisen
Fresh off winning the Audience Choice Award and Top Americana Music Video at the first-ever Michigan Music Video Awards this past spring, Grace Theisen is on fire heading into this summer. A Hope College alumna who has pursued nonprofit work, Theisen previously lived in Nashville, where she opened for the legendary Emmylou Harris. Earlier this year she released her new EP, “Dance With The Shadow” – recorded with Jake Rye of The Social Recording Company in Adrian – where she continues to emerge with her own powerfully strong voice.
Hometown: Kalamazoo
Genre: Blues, Americana
RIYL: Joseph, Larkin Poe

McWeakerton
Strong guitar-playing is the signature of Grand Rapids’ McWeakerton, but they’re far weirder than the usual guitar-centric band – in the best way. A mix of every side of the alternative radio dial, the trio explores the self-described “meat computers” in their heads with a near-psychedelic mix of sounds on their latest album, “Flora/Fauna.” A truly odd odyssey that follows the band’s viral moment on TikTok, it’s only natural to expect the unexpected from these guys.
Hometown: Grand Rapids
Genre: Alternative, math-rock
RIYL: Modest Mouse, Rainbow Kitten Surprise

Shankook
A solo artist with a singular vision, Noah Shankool makes bedroom pop that layers his vocals amid waves of hypnotic synths, groovy bass, searing guitars, and bouncy beats. As a first-generation American, his work has addressed inherited trauma following his family’s escape from Iraq, as well as his own search for identity and meaning in our increasingly digital yet disconnected world. It’s deep stuff that’s not afraid to make you dance, so visit his full-length album, “Bubble World,” and just float in the cross-cultural vibes.
Hometown: Kalamazoo
Genre: Synthpop, indie-dance
RIYL: Toro y Moi, Bayonne

Hannah Laine
Best known in the West Michigan music scene as the lead vocalist for the acclaimed genre-bending act Earth Radio, Hannah Laine continues to explore the range and beauty of her voice as a solo artist. Returning last summer with her first release since her 2017 solo debut – which predated her co-founding Earth Radio – Laine put out “Open Heart,” a single-song improvised meditation piece. It’s enchanting and enigmatic, while alluding to the shared healing she hopes to help others find as a vocal coach and collaborator.
Hometown: Grand Rapids
Genre: Neo-soul, R&B
RIYL: Amy Winehouse, Hiatus Kiayote

Normal Mode
Speaking of musical exploration, keyboardist Dutcher Snedeker, also of Earth Radio, co-founded this new trio alongside bassist Ian Thompson and drummer Nathan Coles. Inspired by space travel, while navigating through jazz, rock, and funk, the band appropriately began the year with a show at the Grand Rapids Public Museum’s Planetarium, following the release of their debut album, “Downlink,” last December. They’ve since gone on to perform a month-long residency at The Listening Room, and aim to share their relaxing, head-bopping grooves with even more shows this summer.
Hometown: Grand Rapids
Genre: Jazz, Lo-fi
RIYL: GoGo Penguin, The Comet Is Coming

Tweet
Published in Local Music
More in this category: « Gratefully Going Forward: The Return of Live Music Desmond Jones: Returning to the Spotlight, Shooting for the Stars »
Login to post comments
back to top