Desmond Jones: Returning to the Spotlight, Shooting for the Stars 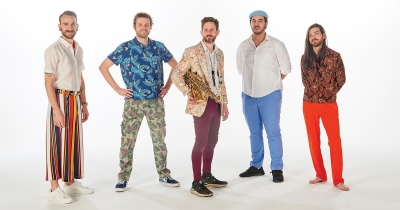 Over their 10-year history as a band, the members of Desmond Jones have always found a way to keep playing their music.

So something like a global pandemic wasn’t about to stop them.

“The pandemic allowed us time to practice, rehearse, and write many of the songs that are on the new album, Rays of Light and Stardust,” drummer/vocalist John Nowak told Revue.

Without live shows, the band scheduled their recording days more carefully, and took advantage of having time together at home. They didn’t feel as rushed and now feel the new album, due out Sept. 1, speaks for itself.

“As a band, the bond between us all and our skills as individuals and a group strengthened,” said bassist Taylor Watson.

The latest member to join Desmond Jones, Watson came into the band back in 2019, just before the pandemic hit, and said the time during lockdown gave him a good opportunity to dive into the band’s extensive catalog of 100 original songs, and counting.

“We spent a lot of time writing and arranging new music as well as learning how to livestream full performances from the comfort and safety of our homes,” he said. “We also created a Patreon page to stay virtually connected to our fans. We were really focused on staying active and relevant during the lockdown, and now that we’re getting back to normal life we are finding that has paid off big time for us.”

Desmond Jones first formed in 2012 in East Lansing while many of its members attended Michigan State University. The band decided to relocate to Grand Rapids in 2015, as both Nowak and guitarist/vocalist Isaac Berkowitz were both born and raised here, and familiar with the city’s strong music scene.

Desmond Jones started out in GR playing the Tip Top Deluxe every Monday night, over what became a 75-week residency of sorts.

“When we first started it was basically an empty bar, and by the end it was packed every week with a group of people who were excited to hear our music, and hang out with other like-minded individuals. It helped us solidify a fan base in Grand Rapids and now we are able to headline places like Elevation (inside The Intersection), a much larger room, but many of the same people come to support us.”

Over their decade together the band has played over 800 shows, taken part in events like Founders Fest, Meijer Gardens Tuesday Evening Music Club, ArtPrize, WYCE’s Jammies, Festival of the Arts and more, while even seeing some of their fans go on to form bands of their own.

Besides adding Watson on bass when original bassist John Loria left the band, Desmond Jones has had the same lineup since the start, with Nowak, Berkowitz, guitarist/vocalist Chris Bota, and saxophonist/vocalist George Falk.

“We’re just glad that everyone in this band is present and healthy,” Falk said about coming out of the pandemic together. “Live music is a special and precious thing, but that’s been overshadowed by how valuable people are. It was never hard to appreciate working with this group of people, but now I feel like we have something like a mandate to enjoy each other’s company. And, of course, jam harder than ever.”

Following the country excursion that was their last album, Why Not?, Nowak said their new album, Rays of Light and Stardust, is a “return to the high-energy, raucous personality of the band.”

“This is a collection of 11 songs that are very new to our repertoire and the freshness and excitement is evident when listening to the record,” Nowak said. “The songs were not specifically written to be a part of a concept album, but the stylistic approach and final arrangement of the tracks bring an exploratory and progressive vibe to the music. This album is very representative of our current live show and the energy we are bringing to our fans right now.”

“Each album becomes my favorite after it is completed, and this is no exception,” Berkowitz added. “It’s heavy, it’s spacey, it’s funny, and I think it’s a good representation of who we are right now as musicians and as people.”

First recorded over three days in August 2021 at the band manager’s studio in Webberville, Mich., Rays of Light and
Stardust came out of the band’s time in lockdown, first performing early versions of many of the songs on their Patreon livestreams, while navigating COVID spikes over the next seven months.

Before the album’s release on Sept. 1, Desmond Jones will play at the Final Cowpie Music Festival at the Shagbark Farm in Alaska, Mich. on Aug. 4, and open for legendary Baltimore jam band Pigeons Playing Ping Pong at Bell’s Beer Garden in Kalamazoo on Aug. 20.

“Opening for PPPP in the Bell’s Beer Garden is going to be a dream come true,” Chris Bota said. “We haven’t played in the beer garden yet, so that alone is a bucket list item. Our manager, Kevin McKay, was PPPP’s tour manager for a number of years, and we always love having the opportunity to see them play and hang with the guys.”

Desmond Jones will follow that up with a free Relax at Rosa performance at Rosa Parks Circle in Grand Rapids at noon on Sept. 1, before heading out on their first extended out-of-state tour since the pandemic began, with stops planned all across the country from New York to Colorado this fall.

Tweet
Published in Local Music
More in this category: « 10 Bands Heating Up This Summer Silent Spirit: The Soul in the Machine »
Login to post comments
back to top