Silent Spirit: The Soul in the Machine 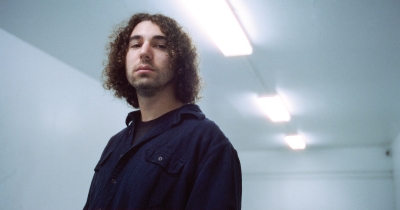 Making music for both morning meditations and mind-blowing club nights might sound like something of a contradiction at first, but when diving into the soundscapes of local electronic artist Jonas Quirin, aka Silent Spirit, it immediately makes a lot more sense.

Born in San Diego, and later raised in Grand Haven, Quirin grew up in a musical home, as his father, who is also a musician, introduced him to guitar, bass, and drums at a very early age. Soon becoming fascinated with the seemingly strange noises of synthesizers, he gravitated to keyboards, even while playing bass in a number of bands, before venturing out on his own electronic exploration.

Letting his lush instrumental songs speak for themselves, Quirin’s journey into music mirrors his discovery of his own sense of spirituality.

“I grew up in a not too religious family,” Quirin told Revue. “So to come to terms with making my own definitions for what I believe in the universe was a really big growing up moment for me, and it was just so parallel with that time period of writing new music.”

Adopting his Silent Spirit persona as a combination of his time spent quietly meditating in his house, while also writing music as an almost ritualistic exercise, Quirin released his first full-length album, Ancestor, which dealt with themes of environmental conservation and climate change, in 2020.

“Music is a big healing thing for me,” he said. “In my life, it’s always been something that I can know is a constant, like I have a playlist for every occasion, right? And I firmly believe that everyone is entitled to have their own definition and own meaning for what it means to be alive.”

Not a DJ nor an EDM artist – although he has appreciation and admiration for what they do – Quirin creates all his music with synthesizers, drum machines, and other analog equipment that he’s collected over the years.

During the pandemic, he dove into making his next album, A Temporary Loss of Awareness, where he attempted to document and encapsulate the surreal time vacuum of the early pandemic.

“That was such a weird period of time between March and June (2020) where music was that constant in my life,” Quirin said. “I developed this routine of waking up, making coffee, a bagel, maybe checking my Animal Crossing, and then I would go sit down and write music.”

He suddenly had 15 songs that he barely even remembered making. He held off on releasing the album until last summer, when he issued it independently as a way of looking back on that period of his life.

As things began to open back up in spring 2021, Quirin received a grant from Avenue for the Arts, which allowed him to combine his passion for music with his equal passion for photography. That project became his next release, Surroundings, which was a full album of ambient sounds, paired with a book of nature photos taken during a trip out West.

“Surroundings is very heavily influenced by nature and a lot of early Japanese ambient music from the ‘80s,” Quirin said. “But it was a cool experience having both of these things together.”

The response to the release was like nothing Quirin could have expected as it started appearing on various playlists for relaxation and meditation, including a prominent playlist on Spotify where the track, ‘Vantage Point,’ off the album, currently has over 50,000 streams and counting.

“When I started performing again, my songs at the time didn’t really have danceable rhythms,” Quirin said. “If you go to a rock show, you’re not necessarily jumping up and down, but you’re just kind of swaying a little bit. That’s what I noticed people were doing.

“But while I’m on stage, I want people to dance and jump, and I wanted to feel that energy. And that was really the driving force for wanting to make an album that people can just dance to and have fun to. And I think also that kind of speaks to the times as well, now that things are starting to return to a new normal, if you will. I think that now we have more accessibility and more opportunities to create a safe environment for people to dance in.”

Silent Spirit will help host Techno Night Sept. 30 at The Pyramid Scheme, which will showcase new electronic sounds and artists in an environment that’s less about the technical aspects, and more about the pure joy of experiencing music together.

“That’s what I want to be a part of and provide for people,” Quirin said. “Come to my show and just dance and have fun. You don’t even have to look at me or pay attention to what I’m doing. I’m just here providing music for you to have fun to.”

Tweet
Published in Local Music
More in this category: « Desmond Jones: Returning to the Spotlight, Shooting for the Stars
Login to post comments
back to top