Bedroom Ceilings: What Dreams May Come 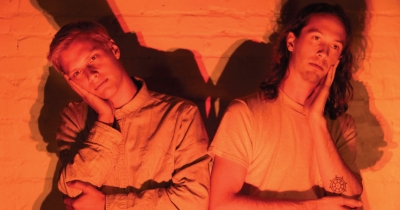 “On the album cover, it looks like Grand Rapids, but like a dream Grand Rapids,” multi-instrumentalist Ben Steer told Revue about the band’s forthcoming new album, “Buildings Outline Their Own Kind of Poetry” (due out Nov. 18).

He explained how the record is like one of those dreams where things feel just off, where the river somehow flows the opposite way, and that recognizable skyline now seems mirrored in the most surreal way.

“It’s a loose concept,” lead vocalist and primary lyricist/songwriter Dean Chittenden added. “It’s an anthology of stories of people in the same spot going through possibly similar things, but having very different perspectives on those things. And it’s supposed to be like, we’re all sort of the same, living different lives, different intricacies.”

If that unnerved feeling of detached disconnection in Chittenden’s description of these new songs sounds like a result of the pandemic, that’s because it is. A large batch of the songs came together during that uncertain time, including the song that ultimately became the album’s lengthy title.

“I think it put a lot more meaning to the album for both of us, just because it’s like you’re trying to find the poetry, the happiness within the pause,” Chittenden said about creating during the pandemic. “So that title sort of came to me. It’s the opening lyric to the second to last song, so it just seemed to fit. Like we’re all going through something, and we’re trying to get to the other side to feel better, or be happy again.”

Chittenden explained how he hopes that his songs help people process or grapple with their feelings of anxiety, in any way they can.

“If someone has gone through anything remotely similar to what I write about, and they feel like it’s helpful, that it’s relatable, it’s relieving, or they find some something that they really enjoy, that’s all I really want for people, truthfully,” he said.

“I think that from what I’ve heard from the fans, a lot of what people appreciate about Bedroom Ceilings is the tenderness of it,” Steer added. “We have a lot of attention to detail in the studio and we try to make it a beautiful experience. And sometimes there will be a rock song that is like very visceral that will perhaps induce some anxiety. But then we also have moments in the album that are really stripped back and bittersweet, like just gentle and mellow. There’s a healthy contrast between I guess helping people with anxiety, and then kind of challenging it.”

That sort of confrontation is something Chittenden experienced himself, as he’s recently overcome his own crippling anxiety when it comes to live performance.

Originally starting Bedroom Ceilings as a strictly studio project back in 2016, Chittenden described how his songwriting process is so private and intimate that he only trusted Steer at first to help bring those ideas to life.

“Bands like The Microphones and Bright Eyes are a huge influence on me,” Chittenden said, as his personal songs often go from acoustic singer-songwriter, to ‘90s indie-pop, to more folk-punk inflected.

When they do play live, they often get a strong turnout, having racked up tens of thousands of plays on Spotify and other streaming services, so they hope to solidify a stable live lineup for more shows next year.

“We have an idea to do an album that’s like a live record, that’s more like a folk record, where it’s five musicians playing in the same room, and then maybe we overdub the vocals,” Steer said of a rawer side of Bedroom Ceilings’ sound they want to explore in the future. “And then we also have an idea for an album that is much more piece by piece, one at a time, like work on a song for a couple of hours, go to the studio, record it, save, and then go to the next song.”

Tweet
Published in Local Music
More in this category: « Silent Spirit: The Soul in the Machine
Login to post comments
back to top