Murder By Death will be taking the stage at Boiling Pot this year.

Indie rock is taking over Michigan this fall in the form of four festivals that are similar in genre, but very different in lineups.

Reaching its third year, Indie Rock Fest will take place in Grand Haven on Sept. 23 and 24 and will feature several local indie bands from Michigan to play over the course of two nights.

The event will adopt a different approach than previous years, becoming a traditional music festival instead of a competition — formerly labeled the "Indie Rock Invitational."

2010 IRI winner Bangups will return to Grand Haven for the event along with 2010 IRI participant Lazy Genius, hailing from Grand Rapids. Other confirmed acts from GR include Nathan Kalish and the Wildfire and Four Finger Five.

"In Grand Haven, there's not much original music," said Mike Coleman, event coordinator and general manager of several Grand Haven restaurants. "It's all kind of beach, top 40, or classic rock kind of stuff, so it's kind of fun doing something you'd find in Grand Rapids or Kalamazoo or in bigger cities."

Over in Kalamazoo, the Boiling Pot Festival (Sept. 29-Oct. 1) looks to pick up where it left off by bringing a diverse, mostly local lineup.

"Last year was a big learning experience," said Chris Walters, marketing director of the festival. "This year, instead of a two-day festival, it's three, and not only does it focus on the music, but on the community."

The event started in Mt. Pleasant by sole creator Corey Densmore in May of 2008 to showcase a multitude of local and established indie talent from the Midwest. It stayed in Mt. Pleasant for another summer before relocating to Grand Rapids in July 2010.

"The only reason it ever really left Mt. Pleasant was because hosting a festival in July in a college town just wasn't cutting it. Now that it's in September, it made more sense to hold it back in Mt. Pleasant with the abundance of students around with nothing much else to do but go to class and drink on the weekends. Midwest Fest is giving them some great music to enjoy while drinking. It's a win/win," Densmore said.

Prospecto, which is in its second year, boasts a few changes in 2011 — a result of critiques made in 2010, its inaugural year. Instead of having 10 venues host the dozens of bands coming to Grand Rapids, organizers of the three-day music fest have whittled the number of venues down to three: The Pyramid Scheme, Intersection and Founders, which are all within walking distance of each other.

"Ten venues made it difficult to see a lot of the acts," said Benjamin Hunter, creative director for Prospecto.

Headlining the festival will be George Clinton and Parliament-Funkadelic, The Walkmen, The Pharcyde, Dale Earnhardt Jr. Jr. and Javelin, among other national and local acts.

Pictured: Top — Murder by Death will headline Kalamazoo's Boiling Pot Festival. Photo by Greg Whitaker. Left: The Walkmen are one of the headlining acts for Prospecto. 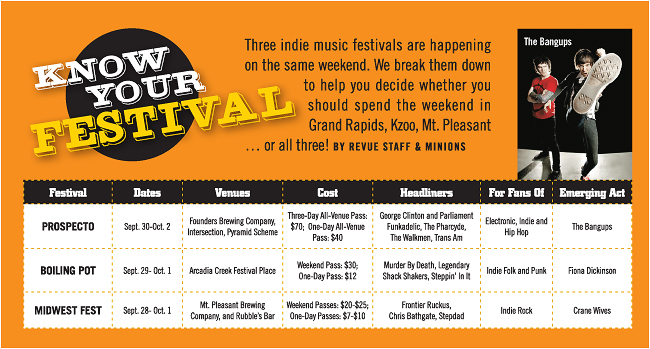