A Night in Review: The Wizards of Winter

It's near impossible to sit down for a show at the Kalamazoo State Theatre and not marvel at its artistry. The uniqueness of its architecture, as well as its starry-skied ceiling, really bring a new dimension to performances of all types.

That's especially true for an act like The Wizards of Winter, a Christmas-themed progressive rock group who last week brought its symphonic holiday rock opera to Kalamazoo's historic stage.

What had begun as a Trans-Siberian Orchestra cover band to help raise money for a local food pantry has since become a successful band in its own right, with two albums of original material under its belt and a third in the works. And on the most recent tour, the group brought audiences along on a journey called The Arctic Flyer, a trip through space and time that looks in on people's lives on the night of Christmas Eve.

The show opened with a lighting sequence that danced alongside musical director Scott Kelly's keyboard work, building momentum into the very first song. It took shape very methodically, and before the crowd knew it, they were entranced by elegant vocal harmonies and cheering during the blistering guitar solos.

The Nutcracker, Ebeneezer Scrooge, The Virgin Mary — these themes and more were touched on throughout the night in a story told beautifully by original Trans-Siberian Orchestra narrator Tony Gaynor. The music weaved in and out from soft and melodic to full-on ’80s rock anthem, with guitars, keys, fiddle and even flute working together to create an engaging, magical holiday experience.

The Wizards finish out the tour tonight in Hagerstown, Md., but will likely roll through the area next year as the holidays approach. Somehow, the group always seem to find its way to West Michigan while on tour. Still, that doesn't mean you can't go snag the album right now and make your Christmas playlist significantly more rocking. 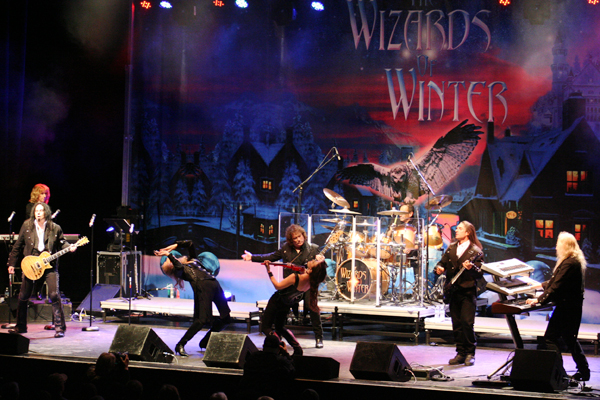