Dancing in the Stars: Moon Hooch brings its sax party to The Stache 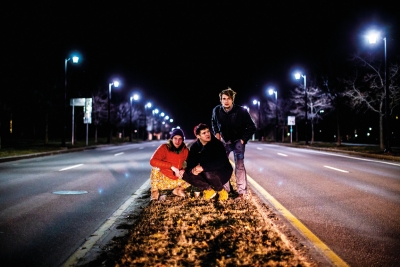 After finding an unusual amount of success in busking, Moon Hooch eventually said goodbye to the train platform and began gigging alongside artists like Beats Antique and Lotus. They also landed their own coveted Tiny Desk Concert by NPR — a feat most musical artists dream of achieving.

Still, horn players Mike Wilbur and Wenzl McGowen, as well as drummer James Muschler, know the band’s success exists because of its humble beginnings in NYC’s subways, and they keep the story central to their current work.

“One day, Wenzl suggested that we play some house grooves with a two-part harmony,” said Wilbur, referencing one of their most memorable platform performances. “People immediately started dancing, and that was when we realized this is the ticket.”

Sonically energetic, eccentric and high-drive jams made of intricate rhythms characterize Moon Hooch’s ability to capture a moment with just their instruments, no vocals involved. The horns take turns singing in each song with melodies so forward they feel like lyrics, leaving no lack in the aural landscape.

If humble positivity and a good time aren’t already enough for you, let’s talk about Moon Hooch’s commitment to planet Earth and carbon neutrality. You heard us right: The band partnered with We Are Neutral, an organization that calculates carbon footprints, in order to offset their own waste created while touring.

“They would track how many miles we would travel by plane and van, and plant trees to sequester the carbon we were releasing in the atmosphere,” Wilbur said.

Moon Hooch don’t stop at calculating their own carbon footprint and planting trees. They’ve started their own organization to help others be better friends of the earth too.

“Since (our partnership), we have decided to take matters into our hands and organize action days, where we invite fans together to plant trees and help local permaculture farms accomplish their missions,” Wilbur said.

However large these actions may sound, the band encourages others to assess their own carbon footprint in practical ways as well.

So there you have it, a band that has it all: good roots, good tunes and good actions. Luckily for you, Moon Hooch has a performance coming up at The Stache on October 18, and it’s clear that the band is very much looking forward to returning to West Michigan.

“It’s going to be a rager,” Wilbur said.

Tweet
Published in On Tour
More in this category: « Back to the Beginning: Multi-platinum country star Lee Ann Womack brings ‘a little bit of East Texas’ to GR Relentless Resistance: Folk music legend Judy Collins returns to St. Cecilia Music Center ahead of two new albums »
Login to post comments
back to top