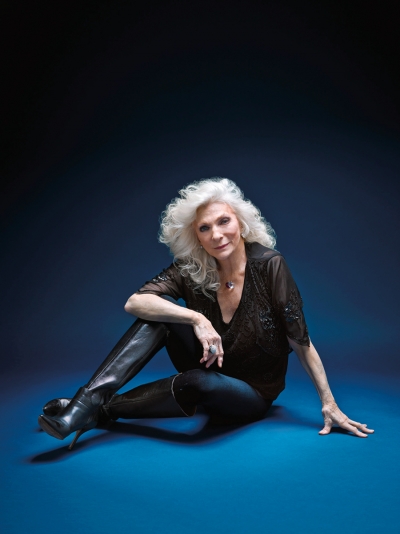 At this point in her career, Judy Collins is an indisputable icon. Influential and inspirational to multiple generations, her work as an award-winning artist, author and activist spans more than five decades.

But she’s not about to stop now.

Last year, she released a new song, “Dreamers”, inspired by the heart-wrenching stories of DACA recipients across the country. Completely unaccompanied, her haunting voice captures the heartbreak and horror many face with drastic immigration reform currently looming on the horizon.

“It’s the most ghastly thing that’s going on,” Collins said about why she had to write the song. “I just happened to be in a situation where I found the footage of a woman who was talking about her mother, being worried about her because she’s a DREAMER. The song came out and I sing it at every show and people are stunned. Then they stand up and clap and scream and carry on, and are happy to have heard it. But then it revolves to them about what are they going to do about it? What is anybody going to do about it? It’s a disgusting situation. One of the worst.”

The song will appear on Collins’ upcoming new album, Resistance in Beauty, which is tentatively due for release in April 2020. Coming ahead of the presidential election, the album will feature several of Collins’ own songs.

“If you are a person of conscience, it doesn’t matter whether you’re an artist or not, you have to take actions about it, and when you do, there’s going to be consequences one way or the other,” she said about being both an artist and activist throughout her career. “There’s always a risk being an activist, but you take it, and you do what you can with it, that’s all.”

First rising to fame in the turbulent 1960s, Collins took influence from folk artists like Woody Guthrie and Pete Seeger. Although raised playing classical piano, she started to pen her own songs and turned to the guitar to tell her stories and share some of the socially charged poetry of her contemporaries, such as Bob Dylan, Leonard Cohen and Joni Mitchell. She also achieved widespread fame and acclaim for reworking standards and showtunes, including her Grammy-nominated version of Stephen Sondheim’s classic “Send In The Clowns”.

Throughout her career, she’s released more than 50 albums, including her 2016 collaborative release Silver Skies Blue with writing partner Ari Hest—for which she earned her first Grammy nomination in 40 years—and 2017’s Everybody Knows, alongside Stephen Stills of the legendary Crosby, Stills and Nash. The pair were romantically involved in the late ’60s, with Stills famously writing the hit “Suite: Judy Blue Eyes” about Collins.

“After we broke up, we actually remained friends, and we’ve been friends for 50 more years,” Collins said. “And of course, we had thought, ‘Wouldn’t it be fun if we could go out and tour together?’ We’d both been working like mad ever since we started, so it took a lot of doing. It took my manager, who is a genius, to put the whole thing together for us, and we had a wonderful time.”

Ceaselessly prolific, Collins has another collaborative release with the bluegrass group Chatham County Line, titled Winter Stories and slated for release on Nov. 8.

Now 80, Collins also has worked as an author, chronicling her own personal battles with mental health and addiction, including her memoir Sweet Judy Blue Eyes: My Life in Music, Sanity & Grace, and her most recent book, Cravings, where she shares her past struggles with compulsive overeating.

“I think having an example of somebody who has stayed with it in spite of all that is helpful,” Collins said about being an inspiration and a trailblazer for generations of artists. “But we all have difficult problems being artists, because first of all, most of the people in the music business who are not artists themselves treat artists like children, regardless if they’re men or women, by the way. So we’re thought of in a way as children, and we’re thought to be disciplined and kept in line. But none of us are. Most of us who succeed go out of those lines.

“But it’s not for everybody. It’s physically difficult. It’s challenging in every way, because everything you do has to be looked at as the next step toward whatever it is you think you’re doing, or taking you somewhere you want to go. What’s amazing is to stay in the mentality that says it really is one day at a time, and you really have to do whatever you can to enjoy the moment and make the very most of it. Maybe that’s the lesson I’ve got.”

Tweet
Published in On Tour
More in this category: « Dancing in the Stars: Moon Hooch brings its sax party to The Stache ‘Boredom is For Boring People’: Third Eye Blind spills on how the band has stayed strong through 11 album cycles »
Login to post comments
back to top