‘Boredom is For Boring People’: Third Eye Blind spills on how the band has stayed strong through 11 album cycles 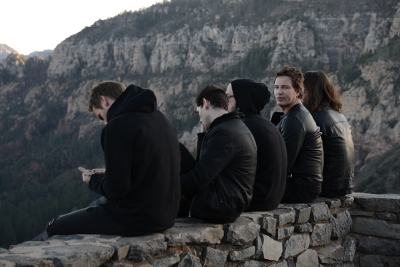 If you’re just hearing about rock band Third Eye Blind, buckle up — they’ve had quite the ride.

Third Eye Blind’s premier release, the single “Semi-Charmed Life,” came out in 1997 and remains the band’s most popular song on Spotify today, reaching nearly 200 million streams. That’s not to say their other 11 albums and EPs have been a wash. In fact, Screamer, the band’s most recent record, was leaked at the Texas music festival Austin City Limits a week before its October 18 release date.

“There were people with it at a signing session,” said Kryz Reid, Third Eye Blind’s lead guitarist. “It was the first time that we got to see it.”

You’d think that after 10 albums, fans would have enough music to keep busy with while waiting for the official release of Screamer. Third Eye Blind, however, is one of those creative anomalies that has remained front and center in its scene for 22 years straight.

Alongside this release are a European tour, a U.S. tour and another album in the works.

“We have — spoiler alert — started writing on our next record,” Reid said. “We just did four tracks in Austin this week.”

Reid has been playing with Third Eye Blind for nearly 10 years, since joining the band in 2010. In a creative industry known for a high burnout rate, it’s rare for bands to stay together for a couple of years, let alone a couple of decades. But the secret to Third Eye Blind’s sustainability is not fame, success or even luck.

“I think it’s just everybody's desire to kind of give back; it sounds so pretentious to say it, but to give back to the industry that we’ve all grown up in,” Reid said. “We’re compelled to do it. It’s not a hobby for any of us. It’s a compulsion.”

Burnout is such a foreign concept for Reid that he’s never experienced writer’s block.

“That’s another thing that never happens in my life,” Reid said. “I never get bored. There’s just so much to see and do, I’m just fantastically excited about all of it. Boredom is for boring people. I’ve never had it.”

Their front of house engineer would love it if the band just showed up for the soundcheck and played their songs, Reid notes, but that doesn’t happen.

“Every soundcheck, we just get on the stage as if nobody is here, as if we’re just five mates hanging out with our instruments. Usually, toward the end of the soundcheck, one of us will remember that, you know, we’re not the only people that exist in the world.”

These soundchecks are critical for Third Eye Blind, as they don’t use any pre-recorded backing tracks during their live performances.

Of course, being a live band means plenty of time spent on the road touring, and Third Eye Blind is no stranger to long drives or trans-Atlantic flights. Since 2017, the band has made the choice to tour zero-waste, a decision it hopes other musicians will make as well.

“It’s a tough thing to do as a touring band, because there's just a massive amount of single-use plastic and stuff like that nobody thinks about,” Reid said. “It’s not something that we think about anymore. It’s just something that's done. I would love it if other bands would follow our lead in that respect.”

Hopefully you’re still buckled up and ready to crank the music a while longer, because Third Eye Blind isn’t slowing down. After more than two decades of being a band, 11 albums and counting, and winning over a global fanbase, Third Eye Blind is a staple that’s here to stay.

But that’s the charm of Third Eye Blind. The band doesn’t hide behind an image, backing tracks or major hits. It doesn’t have to. Fans love Third Eye Blind for what it is: nonstop, authentic rock ‘n’ roll.

Even Reid is careful not to become idealized by an image or the media.

“If you put me in quotes,” Reid said, “make sure it’s exactly what I said.”

Tweet
Published in On Tour
More in this category: « Relentless Resistance: Folk music legend Judy Collins returns to St. Cecilia Music Center ahead of two new albums Anamanaguchi is ready to throw an introspective dance party »
Login to post comments
back to top