Anamanaguchi is ready to throw an introspective dance party 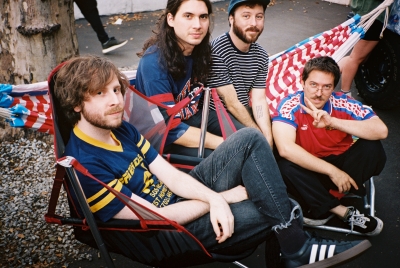 Anamanaguchi’s new album, [USA], isn’t so much an identity crisis as it is an identity journey.

The band chose the title five or so years ago and have stuck with it ever since, even with all the changes in the band’s self-perception, developments in technology, and seismic shifts in the political landscape that have redefined our country’s identity the world over.

Of course, [USA] isn’t about politics or even the country itself. Even with very few lyrics throughout, it’s apparent that the album is about an introspective exploration of identity and humanity. It soars and crashes down with highs and lows that mirror the journey of going hard on a dance floor one moment, then standing in the corner and contemplating life the next.

That’s not to say you should take this all too seriously — above all, [USA] is a supremely fun album full of 8-bit bangers and headbangers.

Revue talked with guitarist and co-songwriter Ary Warnaar about the album and Anamanaguchi’s upcoming visit to Grand Rapids on Nov. 12, all in a perfectly casual e-interview.

How does it feel to finally have [USA] finished and out there?
Very excited to finally have it out. We announced it ages ago, but it really feels like this is the right moment in the world to put it out. It’s still just a baby tho!

The album’s title has been a huge topic of discussion in other interviews. Do you think that’s because the title is so important to the album’s concept, or is it due to the state of the world?
We committed to the title far before the final body of work was completed, and the name definitely shaped what the album is. The title is very clear, but the meaning and purpose of it might not be, initially. The debate around it is definitely invited, as the album explores many questions people might have about it. Why name an album [USA], what importance does that bear? The use of brackets is very intentional — they suggest labels and identity.

This album feels more intentionally cohesive, “human,” and even philosophical, compared to past work. How did you go about accomplishing that?
I’d like to think it’s just a natural progression of what we have experienced as humans. While we previously were more interested in fantasy and escapism, with time, we’ve started to find it equally, if not more interesting to look inward. What is our relationship with fantasy, what is our relationship with ourselves — questions you have to answer with a sense of humanity and direct intent.

You’ve talked a lot about what inspired [USA] conceptually — do you feel like you’ve added any new influences to the mix from a purely musical standpoint?
This might sound weird, but perhaps our own work? Our experiences with everything we’ve done sonically, and why we chose them were something we looked at. Instead of taking an outside influence and putting it through our filter, we took our previous work and put it through our current filter.

The new album slaps, and you’ve said some of its songs are your new favorites to play. What makes them so fun?
There are a handful of things: The simple feeling of imagining something in your head for years and finally realizing it in real life is inherently quite cathartic, but the challenge of performing these songs that cover feelings/moods/sounds we’ve never outwardly shared is amazing as well.

Looks like it’s been years since your last huge tour. Are there any ways you’re approaching the live show differently now?
With these Expo shows, (where Anamanaguchi plays the album front to back), we’ve been approaching the live concert in a more theatrical or cinematic way, with dynamics and evolution. There are moments to party and go all out, but also times to stand still and be introspective.

How do you want people to feel at the end of this show?
Like they want to think about stuff lol.

Anything to say about your openers (Terror Jr and Meishi Smile)?
We def believe that it’s more important to have a lineup of sick artists than a sonically similar or obvious lineup. Shows that look like they were booked by a Spotify algorithm are no fun haha. If you know us, you probably know we have a soft spot for really amazing pop music, and Terror Jr. are definitely that. Meishi Smile and their amazing net label Zoom Lens have been inspiring us for years.

You obviously don’t only play video games — what are some other interests/hobbies you guys have, either individually or as a group?
When I’m not working on tracks, I’m usually out driving or working on my car. It’s a super cute tiny little yellow 4x4 Geo Tracker that says Tonka on it and is falling apart from rust haha. A couple of friends have the same car. We have a motor club called New Day, but all our cars are just like $500 beaters lol. We like driving them about an hour out the city to go on hikes, swim in waterfalls, go mushroom hunting and stuff. So much beautiful nature right outside NYC!

If you could collaborate with one artist that you haven’t yet, who would it be?
At the risk of sounding cheesy, it’s most appealing to work with new artists, kids just finding their sound. I love when people send me demos that they might not know where to go with. Next generation always the best generation!

What's the question you wish people would ask you, but no one has yet?
“Do you believe in life after love?”

Tweet
Published in On Tour
More in this category: « ‘Boredom is For Boring People’: Third Eye Blind spills on how the band has stayed strong through 11 album cycles You Just Have to Get Out and Do It »
Login to post comments
back to top