You Just Have to Get Out and Do It 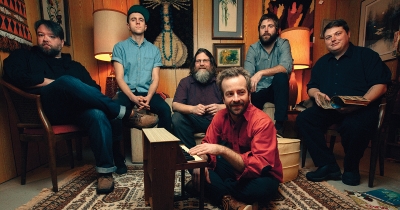 When compared to the traditional suit-and-tie career, the life of a musician is a countercultural choice.

This has no doubt been the case for Tim Saxhaug, bass player and backing vocals of the Billboard-charting bluegrass band Trampled By Turtles.

“Music literally has been my whole life,” Saxhaug said. “Starting piano lessons early, being in musical plays early, being in choirs all through school, to finally learning my instruments at age 15, which I continue to this day, 25 years later.”

The incessant questioning we all face in adolescence about what we’re going to do with our lives wasn’t quite as intimidating for Saxhaug. Because for him, being a musician was the only way to go.

“I haven’t really strayed from that path at all, and I’m not necessarily meaning to.”

Trampled By Turtles recently released an EP of cover songs on December 6, and from songwriting to the studio, the band has produced nine of the 10 albums released in their 14 years together. The best part? The members of Trampled By Turtles all still like each other.

“We all just get along very well,” Saxhaug said. “I think we’ve been extremely lucky on that. From what I see, it doesn’t always work out that way for a lot of other people.”

Every bunk on their 12-bed bus is full when touring. And despite living together in such tight quarters on the road, the band still chooses to hang out before and after shows.

“To have that many people together and still have it work … It kind of shocks me sometimes.”

But when the music starts to play, it’s no surprise to listeners that Trampled By Turtles’ sound is built around honest community. After all, their songs are all collaboratively written, starting with a base melody from lead David Simonett and subsequently arranged together to form a live feel.

Though Trampled By Turtles is dubbed a bluegrass group, each member comes from a separate musical background, from speed metal, hip-hop and jam bands to rock and punk.

“All of that experience, no matter the genres or whatever, just made us all good listeners. We’re all used to throwing something together, and pretty fast we come up with the arrangement that ends up being the song.”

The band’s melting pot of musical backgrounds make them better listeners and technically stronger, and keeps the group open-minded to new influences — even when it goes against their personal preferences in a writing session.

“You’re not always nitpicking at what somebody else is doing that you might not like right away,” Saxhaug said. “If you decide to stay open to it, you might end up liking it, or it’s going to change the way you play.”

With years of experience in the music industry songwriting, recording and performing, Saxhaug and Trampled By Turtles know they’re riding a lucky wave when it comes to being professional musicians today. With an uptick in the usage of streaming services such as Spotify and Apple Music, it’s not only hard to make a buck off of a song, it’s also a challenge to get heard through the noise of everyone else’s music on a now easily accessible market.

“The amount of music out there because of all these different platforms is a lot different from when I was growing up, which was just my local radio stations and MTV,” Saxhaug said. “It’s really crazy. We definitely feel lucky to have caught onto a wave somewhere, at some point, before it got to be so chaotic.”

With the perfect storm of talent, luck and persistence, this wave Trampled By Turtles is riding has taken them all over the world, including to Grand Rapids a few times, where they’ll return this month to play a show at The Intersection.

“It just seems to have gotten cooler and cooler over the last decade or so,” Saxhaug said. “That’s one of the reasons why we like Grand Rapids, but we just like Michigan in general. It’s hard to beat.”

When Trampled By Turtles isn’t touring from city to city or recording their next release, each member lives on their own in a different place in the U.S. Because of their separate locations, their atypical lifestyle as artists gets even more countercultural, as they don’t rely on traditional musician hotspots like New York or Nashville to garner success. In fact, they don’t rely on just one place at all.

When it comes to making music, they make it everywhere.

“We can build these things in the cities we live in. You’ve just got to get out and do it.” ν

Tweet
Published in On Tour
More in this category: « Anamanaguchi is ready to throw an introspective dance party The Lumineers: Three Sides to Every Story »
Login to post comments
back to top